LAUSANNE, Switzerland (AP) — Romania has been banned from competing in weightlifting at the Tokyo Olympics over past doping cases, the International Weightlifting Federation ruled in a decision published on Thursday.

The Romanian Weightlifting Federation was issued a one-year ban from competition over five doping cases. Those included disqualifications for all four of Romania’s weightlifters from the 2012 Olympics after various banned substances were found in later retesting of their samples.

One of those athletes, Gabriel Sincraian, also lost a medal from the 2016 Olympics in Rio de Janeiro for another failed drug test.

Romania becomes the fourth country barred from the Tokyo weightlifting competition after Egypt, Malaysia and Thailand, which were also excluded over doping-related issues. Another 15 countries can send only a limited number of athletes to Tokyo over past doping, including major powers Russia, Iran and Turkey.

The IWF ruling allows for Romania’s suspension to be lifted four months early on Feb. 15 if the Romanian federation pays a fine of $50,000 and no more of its athletes or staff break anti-doping rules before then. 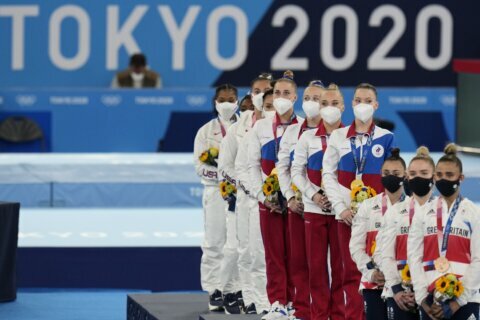