HONG KONG (AP) — Like many in Hong Kong, Jason Chan had no immediate plans to get vaccinated against COVID-19. For the finance professional, there seemed to be no pressing need, with travel restrictions still in place and no major outbreak at home.

But Chan had a change of heart when he heard that one of the city’s property developers was offering a lucky draw with a grand prize of a one-bedroom condominium. The day the draw was announced, he went online and made a booking to get vaccinated.

“It’s a chance to win a free apartment,” he reasoned.

He is one of thousands of Hong Kong residents who have rushed to make vaccination appointments after private companies, encouraged by the government, announced a slew of incentives for vaccinated residents, including the chance to win gold bars or a new Tesla.

The hope is the incentive programs will breathe new life into Hong Kong’s vaccination program, which began in February but has been slower than expected amid widespread vaccine hesitancy due to multiple factors, including fears of serious side effects, a mistrust of the government and a lack of concern from residents like Chan.

At the moment, only about 16% of the semiautonomous Chinese territory’s 7.5 million people have been fully vaccinated, but since the first incentives were announced at the end of May, there has been a surge in bookings. Nearly 600,000 of the 3 million shots given since February came in the last two weeks.

More than 450,000 people signed up on the first possible day for the chance to win the one-bedroom condominium, worth $1.4 million in one the world’s most expensive property markets. Registrations began this week and will remain open until September, when the draw will take place. Proof of vaccination is required to claim the prize.

Hong Kong so far has managed to avoid widespread infections, with fewer than 12,000 cases since the beginning of the pandemic.

But its vaccination rate lags behind countries in the region such as Singapore, which has fully vaccinated a third of its 5.7 million people, as well as the U.S. and Britain, which have reached inoculation rates of about 45%.

That has led to a glut of hundreds of thousands of unused Pfizer-BioNTech vaccine doses, which will expire in August and likely have to be destroyed, even as countries elsewhere struggle to secure sufficient supplies. Authorities have said that agreements signed with pharmaceutical companies currently restrict them from reselling or giving away vaccines to countries in need.

Private businesses, anxious to have the economy return to normal as soon as possible, started offering the incentives on their own at first, saying they wanted to support the government’s vaccination program.

The government had already introduced policies encouraging people to get vaccinated, such as allowing them to visit the city’s popular karaoke bars and clubs, but with the initial success of the private sector initiative, Hong Kong leader Carrie Lam earlier this month urged businesses to do more.

“We all share a common goal to restore normality in Hong Kong as soon as possible by boosting the vaccination rate,” she said.

Some countries, such as the U.S., have used financial and other incentives to encourage vaccinations. In California this week, 10 people were each awarded $1.5 million as part of a “Vax for the Win” program aimed at encouraging residents to get vaccinated.

A Chinese University of Hong Kong survey, taken ahead of the incentive push, suggested the city has an uphill battle.

The telephone survey of 1,200 people indicated that only about a quarter of the unvaccinated population planned to get vaccines in the coming six months. The main reasons given were the fear of fatal side effects and a lack of confidence in the government’s recommendations.

Another reason could be a more traditional mindset when it comes to medicine, said Martin Wong, a family medicine specialist who was part of the team that conducted the survey.

“Vaccines are a preventive medicine, and so in Hong Kong there is less of an incentive for a person to be vaccinated if they do not have any sickness,” Wong said. “This belief can be quite strong.”

The possibility of winning a prize has not been enough to sway Emma Wong, who said she is skeptical about the safety of the rapidly developed vaccines.

“Vaccinations should be voluntary, but recently the government seems to be doing everything it can to urge people to get the shot, even going as far as to say that those who don’t may face stricter regulations in the future,” she said.

“I won’t get vaccinated until the government makes it compulsory or doing so allows me to visit relatives abroad without travel restrictions,” she said.

Hong Kong respiratory medicine specialist Leung Chi-chiu welcomed the vaccine incentives, saying the city should do whatever it takes to reach a vaccination rate of about 70% to reduce the risk of large outbreaks.

“I do not see any moral issue in relation to all these incentives, because I don’t see any chance of a net harm to any particular vulnerable group in our community,” Leung said.

“If we delay too much, it will jeopardize our economy and the people’s living,” he said. “We cannot lock the whole city down forever.” 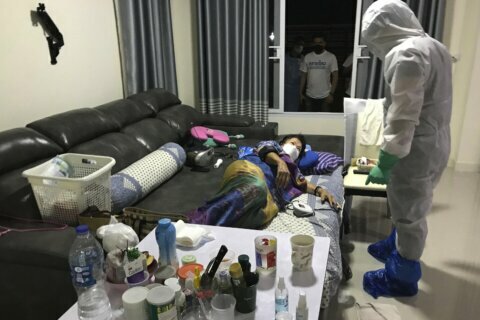 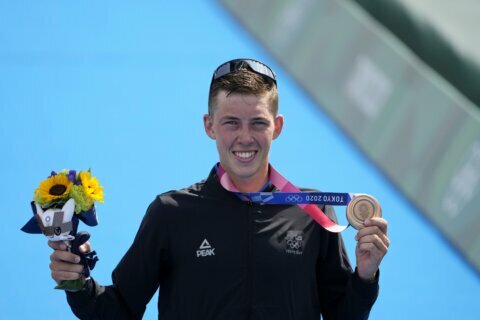 GLIMPSES: The faces of Olympic victory, now without masks