Thailand’s prime minister denied Tuesday that his country’s security forces forced villagers back to Myanmar who had fled from military airstrikes, saying they returned home on their own accord.
Listen now to WTOP News WTOP.com | Alexa | Google Home | WTOP App | 103.5 FM
(1/24) 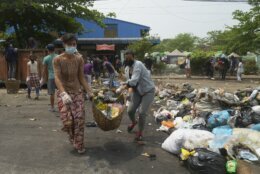 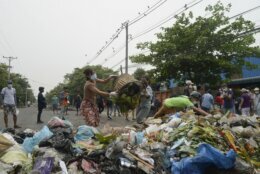 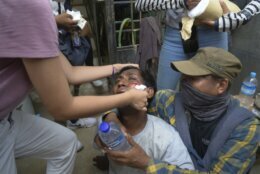 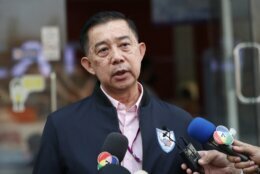 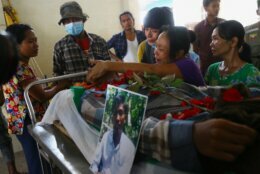 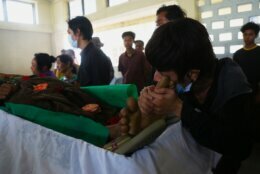 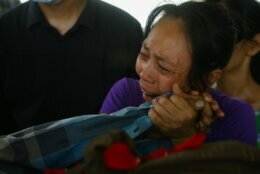 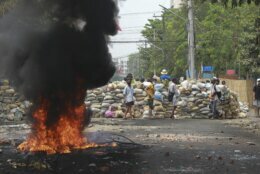 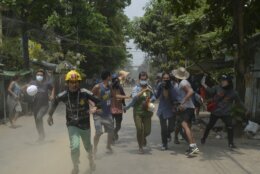 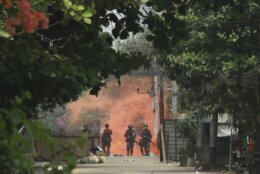 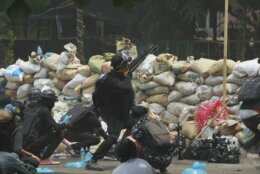 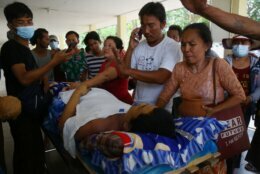 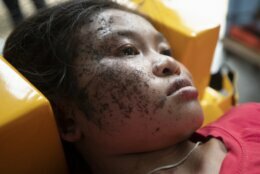 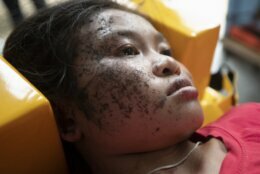 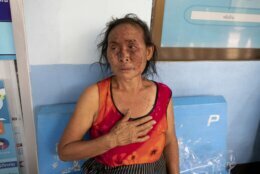 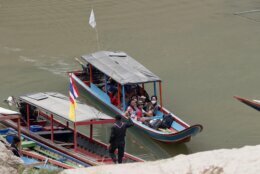 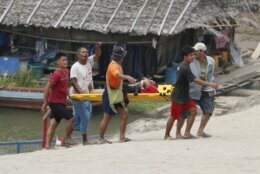 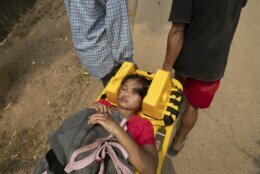 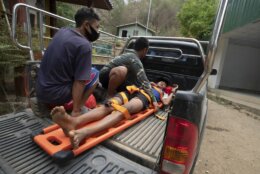 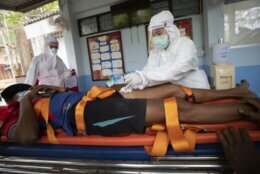 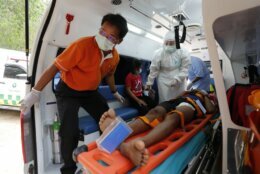 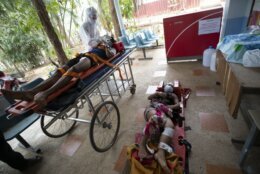 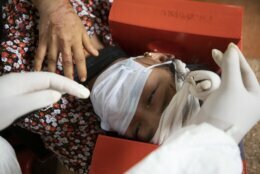 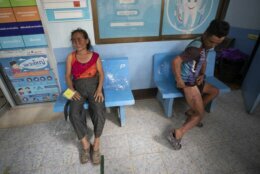 Thailand’s prime minister said the villagers who fled the weekend airstrikes returned home of their own accord, denying that his country’s security forces had forced them back.

But the situation in eastern Myanmar appeared to be getting more, not less, dangerous.

The Karen National Union, the main political body representing the Karen minority, said the airstrikes were the latest case of Myanmar’s military breaking a cease-fire agreement and it would have to respond.

The attacks came as protests continued in Myanmar cities against the coup Feb. 1 that ousted an elected civilian government and reversed a decade of progress toward democracy in the Southeast Asian country. Hundreds of civilians have been killed by security forces trying to put down opposition to the coup.

The U.S. State Department on Tuesday ordered non-essential U.S. diplomats and their families to leave Myanmar, expecting the protests to continue. The U.S. earlier suspended a trade deal and imposed sanctions on junta leaders as well as restricted business with military holding companies.

Dave Eubank, a member of the Free Burma Rangers, which provides medical assistance in the region, provided the same information on casualties.

The KNU has been fighting for greater autonomy for the Karen people. It issued a statement from one of its armed units saying “military ground troops are advancing into our territories from all fronts” and vowing to respond.

“We have no other options left but to confront these serious threats posed by the illegitimate military junta’s army in order to defend our territory, our Karen peoples, and their self-determination rights,” said the statement, issued in the name of the KNU office for the district that was first attacked on Saturday.

Thai Prime Minister Prayuth Chan-ocha, speaking before the latest air attacks, said his country is ready to shelter anyone who is escaping fighting, as Thailand has done many times for decades. His comments came a day after humanitarian groups said Thailand has been sending back some of the thousands of people who fled.

“There is no influx of refugees yet. We asked those who crossed to Thailand if they have any problem in their area. When they say no problem, we just asked them to return to their land first. We asked, we did not use any force,” Prayuth told reporters.

“We won’t push them back,” he said. ’If they are having fighting, how can we do so? But if they don’t have any fighting at the moment, can they go back first?”

The governor of Thailand’s Mae Hong Son province, where as many as 3,000 refugees had sought shelter, said later that those still on Thai soil were expected to return to their own country in a day or two.

Protests against the junta continued in several Myanmar cities Tuesday despite its lethal crackdown that killed more than 100 people on Saturday alone.

Engineers, teachers and students from the technology university in the southern city of Dawei marched without incident.

The number of protesters killed in the city rose to eight with the announcement of the death of a teenager who was shot by soldiers on Saturday as he rode a motorbike with two friends. According to local media, a hospital certificate attributed his death to “serious injuries as he fell from a motorbike.”

Medical workers in Mandalay, the country’s second-biggest city, honored three of their colleagues who have been killed by security forces. The two doctors and a nurse were remembered in a simple ceremony in front of a banner with their photographs and the words “Rest In Power.”

At a cemetery in the biggest city, Yangon, three families gave their last farewells to relatives killed Monday in a night of chaos in the South Dagon neighborhood. Residents said police and soldiers moved through the streets firing randomly with live ammunition.

At least 510 protesters have been killed since the coup, according to Myanmar’s Assistance Association for Political Prisoners, which counts those it can document and says the actual toll is likely much higher. It says 2,574 people have been detained, a total that includes the deposed civilian leader Aung San Suu Kyi, whose National League for Democracy party was reelected in the November elections by a landslide.

At Thailand’s Mae Sam Laep village along the Salween River, which forms the border with Myanmar, paramilitary Thai Rangers on Tuesday twice waved off a boat that had come from the other side carrying seven people, including one lying flat and another with a bandage on his head. But ambulances soon arrived on the Thai side and it landed anyway.

Thai villagers helped medical staff carry the injured people on stretchers to a small clinic at a nearby checkpoint. One man had large bruises on his back with open wounds, an injury one medical staffer said could have been caused by an explosion.

An elderly woman in the group had small cuts and scabs all over her face. Thai nurses in protective gear to guard against COVID-19 attended to her, testing her and others for the coronavirus.

Another villager from the boat, 48-year-old Aye Ja Bi, said he had been wounded by a bomb dropped by a plane. His legs were hit by shrapnel and his ears were ringing, he said, but he was unable to travel to get help until Tuesday.

The airstrikes appeared to be retaliation for an attack by guerrillas under the command of the KNU on a government military outpost in which they claimed to have killed 10 soldiers and captured eight. Tuesday’s KNU statement charged that the strikes had been planned before that.

About 2,500-3,000 refugees crossed into Thailand on Sunday, according to several humanitarian aid agencies who have long worked with the Karen.

They said on Monday, however, that Thai soldiers had begun to force people to return to Myanmar.

“They told them it was safe to go back even though it is not safe. They were afraid to go back but they had no choice,” said a spokesperson for the Karen Peace Support Network, a group of Karen civil society organizations in Myanmar.

The army has restricted journalists’ access to the area where the villagers crossed the border.

Myanmar’s government has battled Karen guerrillas on and off for years — along with other ethnic minorities seeking more autonomy — but the airstrikes marked a major escalation of violence.

Political organizations representing the Karen and Kachin in northern Myanmar have warned in recent weeks that junta forces have been shooting protesters in their regions and threatening a response.

They were joined Tuesday by the Three Brothers Alliance, which represent the guerrilla armies of the Rakhine, Kokang and Ta-ang — also known as Palaung. The alliance said if the killing of protesters did not stop immediately, they would abandon a self-declared cease-fire and join with other groups to protect the people.

The statements from the various ethnic minority groups seemed to suggest their own militaries would respond within their home regions, not in the cities of central Myanmar where the protests and the junta’s repression have been the strongest.

Supporters of the protest movement are hoping that the ethnic armed groups could help pressure the junta. Protest leaders in hiding say they have held talks, but there have been no commitments.