MANILA, Philippines (AP) — The Philippine military has ordered more navy ships to be deployed for “sovereignty patrols” in the South China Sea, where a Chinese flotilla has swarmed around a disputed reef and ignored Manila’s demand to leave the area.

Philippine Defense Secretary Delfin Lorenzana has asked about 200 Chinese vessels he described as militia boats to immediately leave Whitsun Reef, a shallow coral region about 175 nautical miles (324 kilometers) west of Bataraza town in the western Philippine province of Palawan. China ignored the call, insisting it owns the offshore territory and that the vessels were sheltering from rough seas.

It did not say how close the Philippine navy ships would maneuver from the Chinese vessels, whose presence Lorenzana has called an “incursion” and “provocative action of militarizing the area.”

“By the increased naval presence in the area, we seek to reassure our people of the Armed Forces of the Philippines’ strong and unwavering commitment to protect and defend them from harassment and ensure that they can enjoy their rights over the country’s rich fishing ground,” military spokesman Maj. Gen. Edgard Arevalo said in a statement.

The United States said Tuesday it’s backing the Philippines in the new feud with Beijing and accused China of using “maritime militia to intimidate, provoke, and threaten other nations, which undermines peace and security in the region.”

The Philippines has filed a diplomatic protest but China insisted it owns the reef, which it calls Niué Jiao, and said the Chinese vessels converged in the area to avoid rough waters. The U.S., however, said “Chinese boats have been mooring in this area for many months in ever increasing numbers, regardless of the weather.”

Beijing denied the vessels were maritime militias. “Any speculation in such helps nothing but causes unnecessary irritation,” the Chinese Embassy said Monday.

The Philippine government says the reef is well within the country’s internationally recognized exclusive economic zone over which it “enjoys the exclusive right to exploit or conserve any resources.”

“This deployment at Whitsun Reef is not new, but the numbers are way up,” Poling told The Associated Press.

China, the Philippines, Vietnam, Malaysia, Taiwan and Brunei have been locked in a tense territorial standoff over the resource-rich and busy South China Sea for decades. 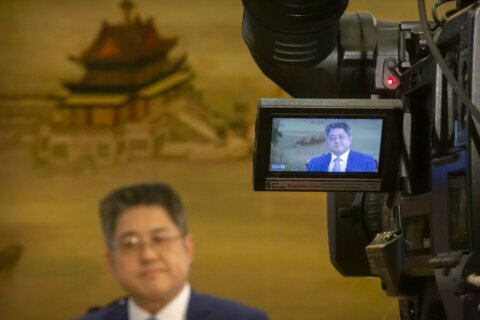