WASHINGTON (AP) — The United States should urgently re-open talks with the Taliban to delay a full withdrawal of U.S. troops from Afghanistan beyond the May 1 deadline agreed to by the Trump administration, a bipartisan experts group recommended Wednesday after months of studying potential pathways to peace.

Sticking to the deadline, without first achieving a decline in violence and progress in peace talks, could lead to a collapse of the Afghan state and a resumption of civil war, the Afghan Study Group said in its report. On the other hand, it noted that if the Taliban don’t accept a delay beyond May in completing the withdrawal of foreign troops, the militants might abandon the nascent peace process.

“The overall strategy that the group is proposing, however, depends on the U.S. negotiating team making clear to the Taliban that they have not fulfilled the conditions in the Doha agreement under which a U.S. withdrawal can take place,” the report said. It was referring to the deal struck in Doha, Qatar, last February that raised hopes of concluding America’s longest war, which in October will mark its 20th year.

The recommendation, part of a broader proposed strategy, offers a possible way forward for a Biden administration which, like its predecessor, sees no military solution in Afghanistan but seems more doubtful of the Taliban’s commitment to a negotiated peace.

Although the administration is not required to accept the group’s recommendation, the report could be given some consideration by policymakers because the study group was created by Congress in a bipartisan 2019 vote.

Pentagon officials in recent days have expressed skepticism of fulfilling the withdrawal commitment made one year ago in Doha. The Pentagon’s chief spokesman, John Kirby, said last week the Taliban have made it “that much more difficult for final decisions to be made about force presence by their reticence to commit to reasonable, sustainable, and credible negotiations at the table.”

Kirby said the administration is undertaking a broad review of Afghanistan policy.

Retired Gen. Joseph Dunford, a lead member of the study group, told reporters that instead of setting a timetable for the full U.S. withdrawal, decisions about force levels ought to be linked to conditions on the ground, including progress in peace talks. He said the group’s recommendations have been briefed to Biden administration officials. He said they found it helpful, but he did not elaborate.

The report offered a potential rationale for the U.S. to seek a renegotiation of the May timetable. It said that would be based on the fact that the peace talks agreed to in Doha were six months late getting started.

“The Biden administration can make the case that there has been insufficient time for these negotiations to create the hoped-for conditions under which international military forces could leave Afghanistan by May, as envisaged in the Doha agreement,” the report said. “A withdrawal would not only leave America more vulnerable to terrorist threats; it would also have catastrophic effects in Afghanistan and the region that would not be in the interest of any of the key actors, including the Taliban.”

In addition to Dunford, who served as chairman of the Joint Chiefs of Staff during most of Donald Trump’s presidency and previously commanded U.S. and coalition troops in Afghanistan, the group included people with extensive backgrounds in diplomacy, politics, intelligence, counterterrorism and military operations.

The Doha deal was widely seen as a hopeful step toward easing Afghans’ prolonged suffering after decades of conflict. It includes a number of Taliban commitments, including a pledge to break ties with al-Qaida and other extremist groups who threaten the security of the United States and its allies.

Echoing concerns raised by U.S. government and military officials, the study group said the Taliban “has not yet demonstrated that it is able or even willing” to fulfill its commitment to part ways with al-Qaida, the group whom the Taliban sheltered prior to the 9/11 attacks. The report said the Taliban is not an international terrorist organization with an intent to attack the United States, but it does “accept assistance” from al-Qaida.

For its part, the U.S. agreed at Doha to fully withdraw by May 2021, starting by reducing troop levels from 14,000 to 8,600 by July 2020. The Trump administration went further, reducing to about 4,500 last summer. Last month it cut further, to 2,500, just days before President Joe Biden took office. That current total is the lowest since 2001, the year the United States invaded Afghanistan in response to the 9/11 attacks that it said were generated by al-Qaida from its base in Afghanistan.

Central to U.S. calculations about withdrawing completely from Afghanistan is an assessment of the outlook for a negotiated peace. Talks began last year and resumed for a second session in January but have made little progress.

The study group said it came to the collective judgment that a complete U.S. withdrawal without a peace agreement would allow extremist groups to gradually rebuild their capabilities “such that they might be able to attack the U.S. homeland” within 18 months to three years.

“A return to conflict in the wreckage of the political process would leave the United States in a difficult position: wanting to withdraw; yoked to a disunited government; and facing, with far fewer resources on the ground than before, an emboldened insurgency,” it said. 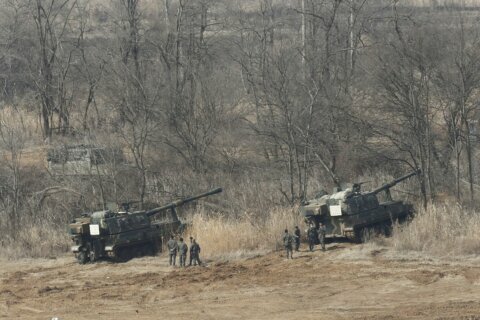