As Iran backs away, US still ready to revive nuclear accord

GENEVA (AP) — The United States is prepared to return to the Iran nuclear deal if Tehran shows “strict compliance” with it, U.S. Secretary of State Antony Blinken said Monday. It’s a new sign of Washington’s ambition to revive the deal rejected by former President Donald Trump even as Tehran appears to be backing further away from it.

Speaking to the U.N.-backed Conference on Disarmament, Blinken laid out a U.S. wish list about many issues including the proliferation of weapons of mass destruction and space-borne threats in the future. He expressed concerns about a Russian anti-satellite weapons test last year and China’s “provocative and dangerous weapons development programs,” in addition to the message about Iran.

Blinken’s comments by video signaled another step by the Biden administration to re-engage with many international institutions and agreements that were shunned, rejected or largely ignored by Trump. It is the first time in years a top U.S. diplomat has spoken to the disarmament body, which has become mainly a venue for countries to voice concerns about disarmament because it has failed to usher in any accords.

The comments on Iran were perhaps Blinken’s most timely message, coming in the wake of new signs over the weekend that Tehran is moving away from — not toward — compromise with Western governments over the nuclear deal.

Blinken said the United States is prepared to return to the accord “if Iran comes back into strict compliance” with it.

On Sunday, International Atomic Energy Agency chief Rafael Grossi told reporters after an emergency trip to Tehran that Iran’s government would begin offering “less access” to U.N. weapons inspectors — involving unspecified changes to the type of activity the agency can carry out.

Grossi said that monitoring would continue in a “satisfactory” manner, pointing to a three-month “technical understanding” to ensure some type of inspections would continue. He stressed that European and U.S. leaders needed to salvage the situation through negotiations.

Blinken emphasized that the United States remains committed to making sure that Iran “never acquires a nuclear weapon,” adding: “Diplomacy is the best path to achieve that goal.”

Working with allies and partners, he said the U.S. will aim to “lengthen and strengthen” the Iran nuclear deal, which was struck in 2015 between Iran and Germany, France, Britain, Russia, China and the U.S. Trump pulled the U.S. out three years later.

Iran has slowly walked away from all the nuclear deal’s limitations on its stockpile of uranium and has begun enriching up 20%, a technical step away from weapons-grade levels.

As for Russia, Blinken hailed the U.S. administration’s quick move to extend the New Start treaty by five years. But he also accused Moscow of having “used chemical weapons to try to assassinate its own people,” including opposition leader Alexei Navalny, and cited a disconnect between Moscow’s “public stance against the weaponization of space” and its ground-based anti-satellite test in December.

“We should be reducing tensions in outer space, not making them worse,” he said.

“The United States is ready to engage Russia in strategic stability discussions on arms control and emerging security issues,” Blinken said. “We will be clear-eyed about the broader challenges posed by Russia and how our respective nuclear arsenals represent existential threats to each other.”

Russian Foreign Minister Sergey Lavrov has regularly attended high-level Conference on Disarmament meetings, and is expected to address it on Wednesday. 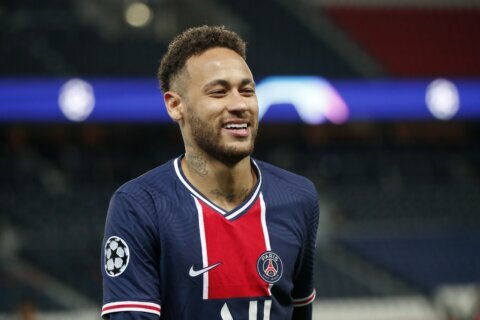