NEW YORK (AP) — Cameron Crowe believes the spirit of a place lingers long after the moment has passed. That’s what makes recording the Broadway “Almost Famous” cast album at New York’s iconic Power Station studio so special for him.

“It’s like going back to the roots of why I love music and what I love about records,” Crowe told The Associated Press during a break in the recording session.

Working in the control room alongside fellow producers Tom Kitt and Scott M. Riesett, Crowe called the process “utterly authentic” as they directed the cast, chorus and band in different studios across multiple levels.

“I have this thing where I believe that the spirits of a place, the spirit of what’s happened in a room stay. The house you lived in, you can go visit. You can feel what happened to you when you lived there,” Crowe said.

Some of the most prominent rock and pop albums were recorded at the legendary studio, including Bruce Springsteen’s “The River,” David Bowie’s “Scary Monsters” and “Tattoo You” by The Rolling Stones.

Standing against the soundboard, Crowe wears that pride on his brow as he tells the latest version of his story through the music. More than another project, “Almost Famous” was a deeply personal coming-of-age-story for Crowe when he wrote and directed the 2000 film, loosely based on his experiences as a teenage music journalist.

“It was the movie we got to make because ‘Jerry Maguire’ did really well. And so, the fact that that becomes what we get to take to Broadway just means the power of music.”

That power increased with the addition of original songs, allowing Crowe — with a huge heaping of help from composer Kitt — to transform the stage version into something more than his cinematic love letter to rock ‘n’ roll. Those songs allowed Crowe to tell a more personal story.

“I thought, if we are going to do something for the theater, for the stage, maybe it’s this personal story that’s filled with music that could make people feel that kind of elixir of the movie. And that was always our goal,” Crowe said.

Before the interview, Crowe sat beside Kitt for one more pass at “Something Real,” one of the songs written for the stage version that includes homage to Deep Purple’s “Highway Star.”

Next on the agenda was a cover of Led Zeppelin’s “Ramble On.” Interestingly enough, the time-honored track blended well with the new songs in a morphing of classic rock and show tunes. Crowe credits Kitt with finding that “sweet spot” between the two genres.

“Tom understands what the songs of the day felt like,” he said. “He’ll write a song that feels like it could have been on ‘Madman Across the Water,’” the Elton John album.

But the admiration goes both ways. During another recording break, Kitt attributes Crowe with familiarizing him with music of the era.

“Cameron is someone who is just a walking encyclopedia when it comes to music,” Kitt said. “So, I was looking forward just learning from him and hearing new songs and new tonalities that were going to inform the work,” Kitt said.

Released by Sony Masterworks Broadway, the cast recording of “Almost Famous” will be available for digital purchase and streaming along with physical releases on CD and vinyl March 17. Of course, for now fans can always catch the show at the Bernard Jacobs Theatre on Broadway. 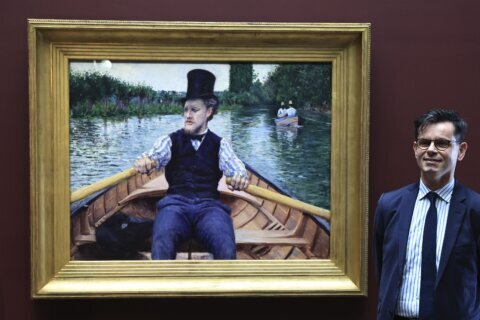