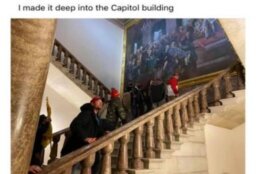 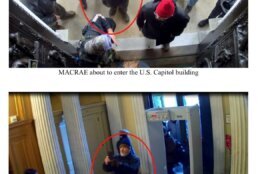 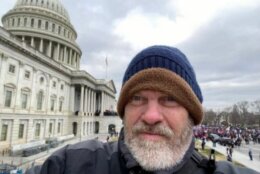 A man from Arlington County, Virginia, was arrested Monday in connection with the riot that broke out at the U.S. Capitol building on Jan. 6, 2021, as a joint session of Congress was certifying Electoral College votes following Joe Biden’s 2020 election victory.

According to federal investigators, Doug Macrae entered the building as rioters smashed windows, broke through doors, and beat and bloodied law enforcement officers.

A tipster submitted information to the FBI, claiming Macrae had posted three images on Facebook that clearly showed he was present during the chaos.

One of the images was a “selfie” of Macrae standing outside the Capitol building.

“In the second post, the person taking the photo appears to be ascending a staircase near a large painting on the wall, and the photo is captioned, ‘I made it deep into the Capitol building,'” investigators said.

The third post showed a hallway inside what appeared to be the Capitol building.

“In the comment section below the photo, another Facebook user asks Macrae ‘Are you there?’ MACRAE responds, ‘Yes,'” investigators said.

Surveillance footage from U.S. Capitol Police also showed Macrae entering the building and walking around for several minutes, according to court records.

During interviews with Macrae, the FBI said that he “admitted to entering the U.S. Capitol building.”

Macrae was charged with several counts, including disorderly conduct and entering a restricted building.

More than 790 people have been charged with federal crimes related to the Capitol riot. Nearly 300 of them have pleaded guilty, mostly to misdemeanors, and more than 170 have been sentenced.

Three months is the longest prison sentence so far among rioters who have pleaded guilty to misdemeanors, according to an Associated Press review of court records.

More than a dozen defendants who pleaded guilty to riot-related felonies have been sentenced to prison terms ranging from six months to over five years.