Decades after an Arlington, Virginia, woman was found dead in an apartment she shared with her fiance, that man and another have been charged in her death.
Listen now to WTOP News WTOP.com | Alexa | Google Home | WTOP App | 103.5 FM

Twenty-three years after 52-year-old Andrea Cincotta was found dead in an Arlington, Virginia, apartment bedroom she shared with her fiance, that man and another have been charged in her death.

James Christopher Johnson, 59, of Alexandria, and Bobby Joe Leonard, 53, have been charged in relation to Cincotta’s death on Aug, 21, 1998, according to the Arlington County police.

The police said that in 2013 its Cold Case Unit began a “fresh look” into the homicide in the 1700 block of N. Rhodes Street, in the Colonial Village neighborhood, by reviewing “cold case files, crime scene evidence, laboratory results, and additional witness interviews.”

“The passage of time does not diminish the need for answers and accountability in this senseless crime that took Andrea’s life,” Police Chief Andy Penn said in a statement. He said the indictments of Johnson and Leonard “are the culmination of years of dedicated investigative work in our ongoing pursuit of justice on behalf of Andrea and her family.”

Johnson is being held without bond at the Arlington County Detention Center. He had lived with Cincotta for seven years and was arrested Tuesday. The Washington Post reported that Johnson is accused of enlisting Leonard to kill Cincotta, who had been strangled.

Leonard is being held on unrelated charges at Wallens Ridge State Prison in Big Stone Gap.

Police said that despite the indictments, the criminal investigation remains “active.” Anyone with more information is asked to contact Arlington police Det. R. Ortiz via email or by phone at 703-228-7402. Information can be reported anonymously through the Arlington County Crime Solvers hotline at 1-866-411-8477, as well. 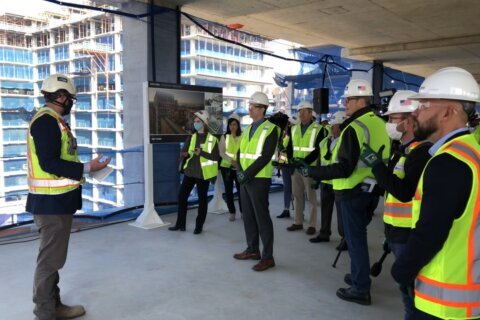