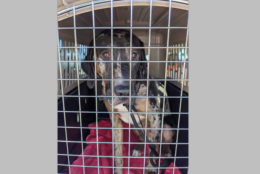 The quick actions of several animal control officers in Arlington, Virginia, is being credited for saving the life of a very frightened dog.

It was Wednesday morning when an Arlington Transportation bus driver called to report a dog, trapped in between two fences, just inches away from Interstate 395.

Cliff Ballena, sergeant of animal control for the Animal Welfare League of Arlington said that when his officers arrived they first began trying to calm the animal, which took about 30 minutes to do.

“It did take a couple of treats, Vienna sausages for him to come out,” Ballena said.

Ballena said as they calmed the animal, they also searched to see how they could get to him. Unable to find the location at which he entered, the officers had to resort to cutting the fence.

“She [an officer] ended up using a snapping snare to get him,” Ballena said.

Ballena said the dog was not injured or underweight when he was brought to the shelter. The dog did have a collar, but it didn’t include its owner’s information. However, Ballena said the dog knew how to play fetch, so they believe he does have an owner out there.

“You can throw the ball and he catches it right away, so he is definitely somebody’s dog,” Ballena said.

He is hopeful that his family comes forward. If not, after 10 days as per Virginia law, the dog would be neutered and put up for adoption.