An ice cream shop in Arlington doubled its sales after offering a cicada sundae. But you won't find any of the 17-year insects in the treat.
Listen now to WTOP News WTOP.com | Alexa | Google Home | WTOP App | 103.5 FM
(1/4) 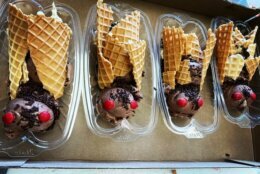 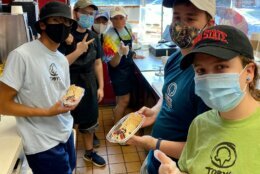 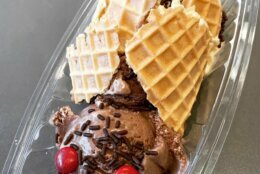 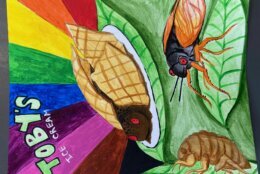 On a recent Sunday at Toby’s Homemade Ice Cream in Arlington, Virginia, Toby Bantug and his staff were stretched thin.

After sharing a Facebook photo debuting the shop’s cicada sundae, two customers wanted to try it. The next two in line ordered the same. The demand didn’t stop for four hours, said Bantug, who calls himself “chief everything officer” since his duties range from serving customers to mopping the floors.

The shop sold 76 cicada sundaes, which appear like the Brood X creatures but don’t contain them, that Sunday. Bantug had to make more waffle cones on the fly. He frantically dug through a bag of M&M’s, seeking the red chocolates that he deemed the key to match the bug’s eyes.

The creative dessert has turned the D.C.-area shop into a viral sensation, with a recent Facebook post highlighting the sundae securing more than 6,800 shares. It has also helped the shop nearly double its sales, forcing it to close early because it’s out of the most popular flavors.

The website Cool Mom Eats deemed the creation the official dessert of summer 2021. And when people call and ask whether Toby’s is the home of the cicada sundae, Bantug laughs, because that’s not what he initially planned to call it.

“When I took the original picture, this person had ordered cicada sundaes, like four of them,” Bantug told WTOP. “I took the picture, and I’m sure they took a picture too. It just got this crazy response, so it’s been a fun ride.”

Bantug came up with the idea for the sundaes after noticing another Northern Virginia bakery offering cicada cookies. So, in a matter of minutes, he took a picture and added the item to the menu. But when the staff members noticed the addition, they were initially concerned, fearful that the sundae would feature actual cicadas. Bantug assured them that wouldn’t be the case.

Since sharing the first sundae on Facebook on May 20, Bantug and his staff of seven have aimed to keep the item consistent. It features three scoops of ice cream in a banana split container, usually bittersweet chocolate, chocolate and cafe ole, which is coffee flavored. The staff adds chocolate sprinkles for texture and uses M&M’s for the eyes and waffle cone pieces for the wings.

While Bantug said some variation is OK, the shop tries to be consistent. When the sundaes arrive on the counter, Bantug said, the photos begin.

During the first weekend, the shop sold 30 sundaes, notably higher than the five sundaes Bantug would have been satisfied with. But a spike in sales has continued, with Toby’s averaging 100 cicada sundaes a day since last week. Some kids and families have started arriving at 10 a.m. to order them.

Bantug credits his staff for its ability to keep up with the demand, but he doesn’t anticipate the sundae will be on the menu much longer.

“We will have the sundaes as long as the cicadas are out,” Bantug said. “As soon as we see that last cicada, you will probably be seeing the last cicada sundae fly out of our store as well, for another 17 years I guess.”