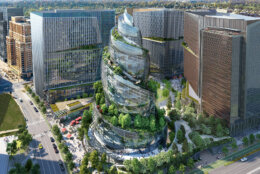 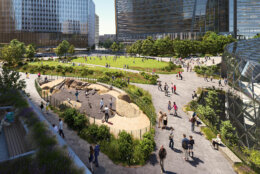 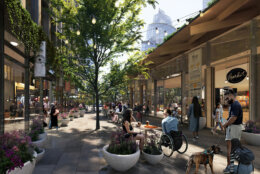 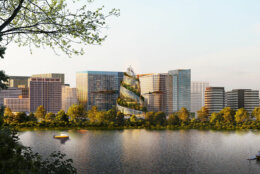 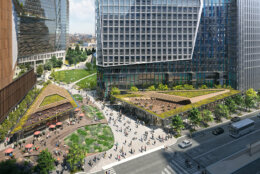 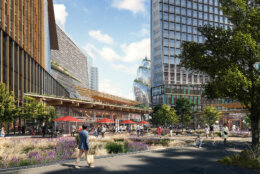 Amazon construction plans in Arlington, Virginia, made public Tuesday include a 350-foot-tall corkscrew tower with a nature trail on the outside that follows the building’s curves as it reaches toward the sky.

The PenPlace project aims to create a community uniting people and nature within an 18-hour district, according to John Schoettler, Amazon’s vice president of real estate and facilities.

“We want these spaces to be lively and energetic, not only during the day when all of the Amazon employees are there, but also in the evenings and on weekends — that’s super important to us,” Schoettler said.

All trucks and deliveries will access underground facilities from Army Navy Drive. There will be 2,100 underground parking spaces for vehicles. Dedicated bike lanes on surrounding streets will lead to street level ride-in, ride-out bike facilities with more than 950 bike spaces.

The 12th Street side of the site is being envisioned as a retail village of European-style pedestrian avenues, three wooden-framed pavilions, restaurants, shops and outdoor eating along two-story open rooftop venues overlooking the outdoor space. Priority will be given to local businesses and not national brands.

“Outdoor spaces that are really well designed to accommodate all kinds of events whether that be a concert in a park, farmers market — there’s a dog run,” said Dale Alberda, lead architect of the project. “And further, thinking about uses beyond retail — things like a 20,000 community facility and a day care that would be available to the public as well.”

The site will be powered by a solar farm in Pittsylvania County, Virginia, that Amazon bought in collaboration with Arlington County. It will include 2.8 million feet of office space spread among three 22-story LEED Platinum office buildings and The Helix, a building designed to embrace natural elements inside and out.

The double helix design of the building includes two outside terraces planted with trees and foliage native to Virginia’s Shenandoah mountain range.

“We’re thinking of one side as the hill climb and the other side as what we’re calling The Terraces, or more relaxation outdoor spaces,” Dale said.

Every floor in the building has the ability to connect to both paths.

“And, of course there’s elevators inside the building so that if you’re not able to walk all the way up you can come up to whatever floor you want and get out and enjoy all the different levels out there,” Dale said.

Two times a month, the public will be invited to The Helix, which will also permanently host artists-in-residence creating work alongside Amazon staffers.