As the seconds ticked down in the FIFA Women's World Cup Final between Team USA and The Netherlands, the excitement ramped up, as fans got ready to celebrate back-to-back World Cup titles. See photos and video.
(1/6) 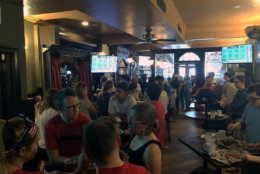 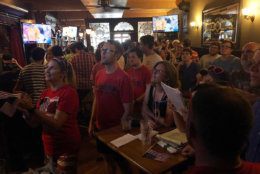 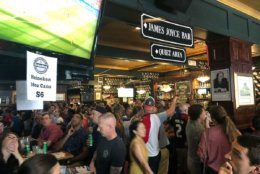 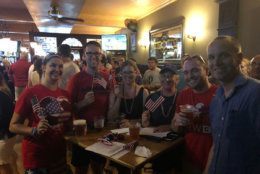 Share on Facebook. Share on Twitter. Share via email. Print.
As the seconds ticked down in the FIFA Women’s World Cup Final between Team USA and The Netherlands, the excitement ramped up, as fans got ready to celebrate back-to-back World Cup titles.

After a tense, and scoreless, first half, the crowd at Ireland’s Four Courts in Arlington’s Courthouse neighborhood erupted when USA captain Megan Rapinoe punched home a penalty kick to make it 1-0. Sixty one minutes felt like a long time to wait for the game’s first goal, but fans still enjoyed how dominant the team was all tournament.

“I don’t think that ‘dominating’ is a strong enough word. They were unbeatable,” one fan, Daniel, said. “Probably the best team that’s ever been in a World Cup, honestly.”

The team’s otherworldly play brought a lot of people along for the ride who might not have ordinarily tuned in.

“It’s amazing,” said another fan, Amanda. “Especially being here with everyone else who watches it too, it’s a community. And a country, obviously, but it just makes it so much more exciting.”

Amanda was donned head-to-toe in red, white, and blue, including American flag pants. Little American flags were strewed across the table she and her friends were sharing.

They weren’t the only ones who found community in the game — Shauna said she was glad that other people have gravitated toward a sport she has enjoyed her whole life.

“I’ve always liked soccer,” she said, “but I’m really excited that a women’s sport is finally getting national attention. The fact that this bar is packed — and it’s packed with both men and women — is pretty f—— awesome.”

Cassandra, who just came back from France, the tournament’s host nation, said the excitement surrounding the tournament carried over to the other side of the Atlantic.

“In all the cities I went to, it was packed with Americans,” she said. “Packed in the bars, at the stadium, so the support is there.”

Fittingly, as the last second of the game ticked off the clock, the first song to come through the bar’s speakers was Queen’s “We Are the Champions,” a tune that brought everyone to their feet to sing along together.