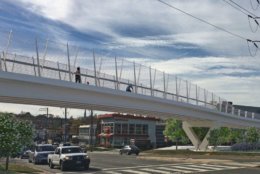 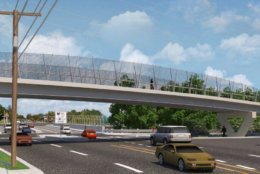 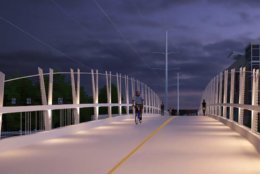 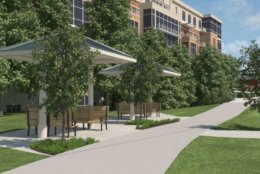 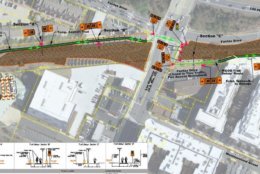 State transportation officials have firmed up their plans for a new bike and pedestrian bridge over Lee Highway in East Falls Church, putting the project on track for construction to kick off next spring.

VDOT unveiled final designs for the planned Washington & Old Dominion Trail bridge at a community meeting last Thursday (Oct. 11), sketching out more details on the bridge that is designed to offer a safer alternative to the trail’s current crossing at the highway’s intersection with Fairfax Drive.

The bridge’s design is largely unchanged from plans that VDOT showed off last summer. Some of the biggest changes include the removal of a barrier with streetlights running down the middle of the bridge and a change to the “piers” holding up the bridge — they now include open space in the middle of their “v” shape.

Officials initially proposed a design for the bridge that featured a trussed roof and red paint, yet some neighbors objected to those features, as well as the bridge’s potential to disrupt long-range plans for the area’s transportation networks.

Planners ultimately changed the bridge’s color and removed the roof, and even agreed to tweak the lighting features on the bridge too. Instead of a barrier lined by street lights, the bridge will now include lighting underneath the v-shaped posts running along its sides.

Planners are tentatively hoping to begin work on the bridge early next year, then wrap it up by the fall of 2020. The work will also move in tandem with the I-66 eastbound widening project, which VDOT also hopes to complete in late 2020.