According to a law enforcement source, investigators tested the letter and envelope and “ruled out several things," but they have not yet determined what caused the injuries.
Listen now to WTOP News WTOP.com | Alexa | Google Home | WTOP App | 103.5 FM

WASHINGTON — Biological testing is underway in D.C. on the suspicious letter that sickened 11 Tuesday at Joint Base Myer — Henderson Hall.

A law enforcement source told WTOP that investigators tested the letter and envelope and “ruled out several things,” but have not yet determined what caused the injuries.

An Arlington County Fire Department hazmat team’s field test earlier came back negative for chemical/radiological screening. The letter — which authorities described as not having any threatening text — has since been sent to the D.C. Department of Forensic Science for biological testing, which is expected to take about five days to process.

The letter “was sent by certified mail, and it’s not clear yet where it was sent from or who sent it,” according to another law enforcement source.

The letter arrived at the facility around 3:30 p.m. Tuesday on the base’s Marine Corps side, according to a news release from the base. Symptoms among those affected included burning hands and, in one case, a nosebleed.

Three were treated at a hospital and released.

“Personnel in the affected building took immediate preventative measures by evacuating the building,” said a Tuesday evening statement from the Pentagon.

The Arlington facility is headquarters to service personnel working throughout the D.C. region.

The Naval Criminal Investigative Service is leading the investigation. 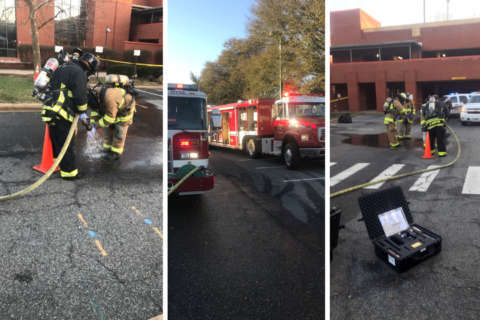