Who can change the names of roads in Virginia?

Arlington County wants to change the names of Jefferson Davis and Lee highways within the county, but doing that is a bit more complicated than you might think.
Listen now to WTOP News WTOP.com | Alexa | Google Home | WTOP App | 103.5 FM

WASHINGTON — There has been renewed interest in Virginia to rename Confederate-named roads in the commonwealth after the violent protests broke out in Charlottesville earlier in the month.

So, who decides whether a road can have a new name?

It is a bit complicated in Virginia, even though the state owns almost every road.

The only streets it doesn’t own are those inside city limits or local streets in Arlington and Henrico, which did not turn over control of its roads to the state when the Byrd Road Act passed the General Assembly in 1932.

In cities, city hall controls what roads are called. That’s why the City of Alexandria can rename U.S. 1 — currently signed as Jefferson Davis Highway — without any approval needed from the state.

In every county — including Arlington and Henrico — interstates, U.S. highways, and primary roads, noted by their shield-shaped route markers, are named by the General Assembly.

A bill must be passed for U.S. 1 to be renamed in Arlington.

The Virginia Department of Transportation handles the numbering of state routes.

Although the state does own every road in each county — with the earlier exceptions noted in Arlington and Henrico — counties have been ceded the power to name secondary roads.

Those roads are noted with circle-shaped route markers.

“Every time a house goes up, there’s not a bill that goes to the General Assembly that says the street in front of your house is now going to be called Smith Avenue,” said Virginia delegate Dave Albo.

Albo and Arlington County Board member Christian Dorsey both admit the arrangement is unusual compared to other states.

Dorsey said Arlington has long wanted to change the relationship. Ideally, he said, the county wants to control the names of all of its roads. The board member also stated that counties across the state should be treated to the same privileges as cities do.

“We definitely believe that it’s inconsistent, doesn’t really make any sense that we wouldn’t have that authority,” Dorsey said.

The county said attorneys are looking to see if the law is clear enough about what the name of a road should be and who has the authority to name it.

“Arlington is not looking to do anything different or special,” Dorsey said. “It is just to have the same authority that our neighbor — Alexandria — has.”

On Thursday, board chairman Jay Fisette wrote in a statement that the recent events in Charlottesville highlight the need for local control of renaming roads like Jefferson Davis Highway and Lee Highway — U.S. 29. He lauded the county’s effort in removing every other Confederate symbol in the county.

Dorsey said there is no current plan to rename Lee Highway, but the county would like to retain the right to change the name if it wished.

There are 14 roads in the county that are owned by the state and thus cannot be renamed without a law passed by the General Assembly.

Beyond the obvious ones, like the interstates and U.S. highways, some of the affected roads include Glebe Road (Route 120), Old Dominion Drive (Route 309), stretches of Washington Blvd./Fairfax Drive/10th Street N. (Route 237) and even Spout Run Parkway (Route 124).

It’s the same case throughout the state.

All three, though, are owned and maintained by VDOT.

Alexandria and Falls Church can rename Route 7 — which they each call King Street and Broad Street, respectively — without approval by the General Assembly since they are cities, but Fairfax County can’t ditch the name Leesburg Pike and Loudoun County can’t unload the name Harry Byrd Highway without state legislation. 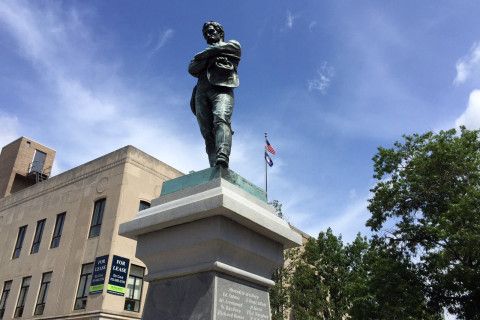