On a sunny morning at the Guardians Memorial in downtown Annapolis, tearful remembrances mixed with laughter among those bonded by the shooting at the Capital Gazette newspaper four years ago.
Listen now to WTOP News WTOP.com | Alexa | Google Home | WTOP App | 103.5 FM

On a sunny morning at the Guardians of the First Amendment Memorial in downtown Annapolis, tearful remembrances mixed with laughter among those bonded by the shooting at the Capital Gazette newspaper four years ago.

The brief ceremony started with the words of Annapolis Poet Laureate Maggie Renshaw read aloud by William Rowel, of the mayor’s office.

“When we heard of another tragedy,” said Rowel, “tears welled in our eyes.”

The memorial site, which sits along Compromise Street in downtown, features a plaque with the First Amendment, another bearing the front page of the newspaper on the morning after the shootings, and five pillars, one for each of Gerald Fischman, Rob Hiaasen, John McNamara, Rebecca Smith and Wendi Winters. 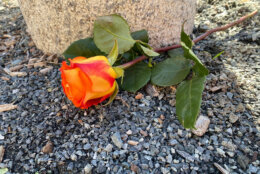 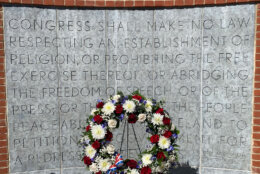 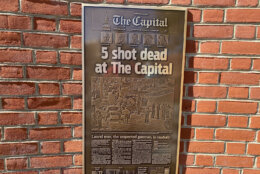 When the ceremony concluded, Oz San Felice, the mother of former reporter and shooting survivor Selene San Felice, placed an orange rose up against each of those five pillars.

“She saw them die in front of her, and I thought that this was the only way that I could pay my respects to those who didn’t make it and she did,” Felice said.

“When the anniversary comes around, it definitely picks at the scab,” she added. “But you power through it and you say a prayer.”

Tuesday’s event was the first public memorial service held since the shooter was sentenced to spend the rest of his life in prison. Even with the legal side of the shooting resolved, San Felice said it doesn’t change much.

“No; I’m still angry. I’m still hurt,” she said. “All of these people that have been impacted by this ugly, ugly thing that happened — it’s never going to go away. Twenty years later, we’ll still know it.”

“Every year does get a little easier,” Maria Hiaasen said, whose husband Rob was killed in the shootings. “Even as we are moving forward in the best ways we can, we hold those loved ones we lost with us.”

Her husband, an editor at the paper, was killed on her birthday.

“It is the longest day of the year for me,” she said. “We tend to put that aside, and now this is what this is about. This is the tradition and there are tears, but there’s also a batch of happy memories for this lovely spot right near the water, and some of these folks here, who meant the world to Rob.”