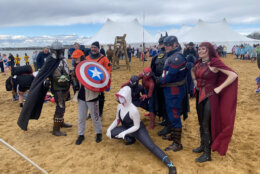 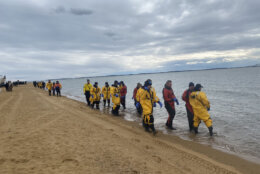 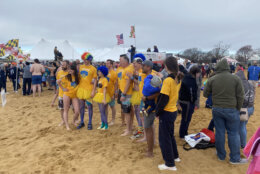 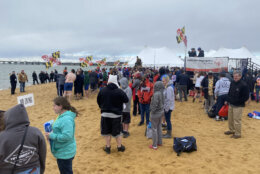 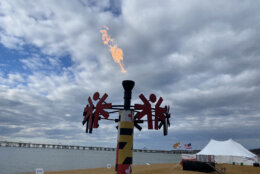 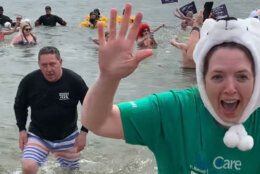 While most of us wore sweaters on the chilly spring Saturday — many donned their swimsuits and braved frigid water for Maryland State Police’s Polar Bear Plunge.

It’s one of the largest fundraisers for Special Olympics Maryland, accounting for a quarter of its budget.

Around 4,000 people hopped in the water at Sandy Point State Park to fundraise about $2.8 million for Maryland’s Special Olympics. It was the first time the plunge was held since the pandemic began. They had to move to a virtual event in 2021.

“We’re freezin’ for a reason,” Kira Northrop the senior director of communications with Special Olympics Maryland, told WTOP. “It’s so exciting to be back — we couldn’t wait to get back on the beach at Sandy Point State Park.”

The event is typically held in February but was pushed back due to COVID-19 concerns. But luckily the postponed 2022 event was still plenty cold with winds whipping and temps in the low 50s.

“It’s not as cold as I thought it would be actually. It’s a balmy 55 degrees,” said plunger Mark Ewing, joking about the waters frigidness.

Organizers said the water temperature was actually around 49 degrees.

Wave after wave, hundreds of people would wait for the countdown and then rush into the water, freeze their tushy’s off and then make their quick escape back to the beach.

Some roughed it out and swam all the way out to the volunteer divers who were in specialized wet suits. They usually exchanged an enthusiastic high five.

It was Jeremy Reed’s ninth year making the plunge. He said the cause is close to his heart as his friends have children who have special needs.

“As soon as you hit that water, it will take your breath away, but you just gotta keep moving,” said Reed. “It’s about 15 – 20 seconds worth. So if you stop you’re gonna freeze and you got to go under because if you don’t go under, you’re gonna be colder.”

Morgan Somerville is on her third plunge.

“It was really cold but it’s such a good cause that it sometimes just makes you blackout because you’re like ‘I’m doing this for a really really special cause’ because the athletes of the Special Olympics are truly incredible,” said Somerville, after completing her plunge while wearing a bright pink flamingo inner tube.

Special Olympic athlete Kris Stone has done the plunge before but not this year.

Each participant pledges a minimum of $75.

“And the fundraising will keep on and hopefully we’ll reach our $3.5 million goal,” said Northrop

Watch participants make a dash for the water below.

WTOP’s Jessica Kronzer and Matthew Delaney contributed to this report.