Md. teen searched for ‘murder’ song, was caught on 911 tape moments after killing

A 19-year-old pleaded guilty in the murder of real estate salesman Steven Wilson, who had just finished showing a model home in Hanover on Dec. 5, 2018.

A Maryland teenager is facing the possibility of life behind bars after admitting to a judge he killed a young father just to steal from him.

“I’m feeling very glad that there’s some justice for Steven Wilson’s family,” said Anne Arundel County State’s Attorney Anne Colt Leitess, but added that the details of what happened both during and right after the crime just didn’t make sense.

She plans to seek a life sentence for 19-year-old Dillon Augustyniak, of Jessup, following his guilty plea in the murder of Steven Wilson, of Annapolis.

Wilson was a father and salesman who had just finished showing a model home in Hanover on Dec. 5, 2018, when a gunman came through the front door and fired a shot.

“The victim was able to dial 911 and at least communicate to the call taker that he needed an ambulance. He couldn’t say much more than that. We captured Mr. Augustyniak’s voice in the background demanding money and then saying, ‘Who are you talking to,'” Colt Leitess said.

The call Wilson made to 911 where he struggled to speak was played in court during Augustyniak’s plea hearing last week.

Augustyniak took the victim’s cellphone, laptop, keys and power cords. Surveillance video shows Augustyniak running back toward the wooded area behind the model home with a bundle in his arms, prosecutors told the judge.

Moments after firing his rifle, the teen, who has a history of mental illness, used Wilson’s phone to search for a song called “Murder on My Mind” and send a message on Snapchat, Colt Leitess said. After Wilson’s phone locked up, Augustyniak sold it to a neighbor who later connected the dots after seeing news reports about the murder and called police.

Augustyniak was arrested shortly afterward; however, Colt Leitess said, it took months to get the ballistics and DNA testing back to present as hard evidence against the teen.

“It had devastated so many people. It’s hard to fathom this young man was just starting out in life. He took a life and he had no reason to leave the safety of his home and walk through the woods to this model home. I think he saw it as a crime of opportunity. Instead of stealing his wallet and phone, he killed him, too, and took him away from his family,” Colt Leitess said.

Augustyniak will be sentenced in October. 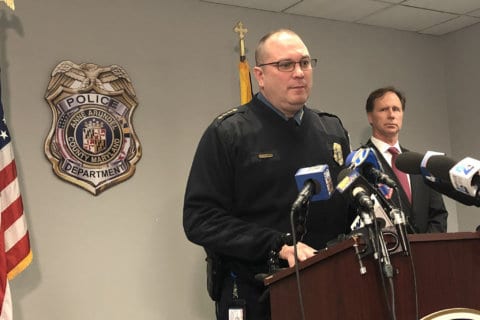