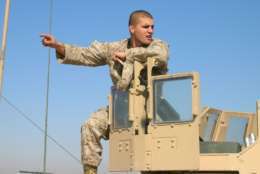 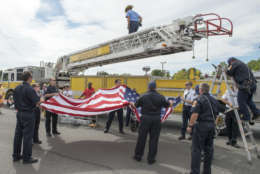 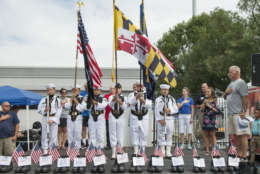 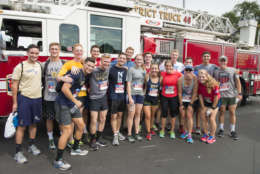 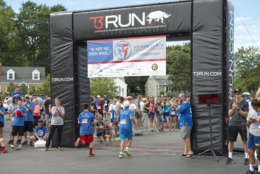 WASHINGTON — This year’s 9/11 Heroes Run marks the 10th anniversary of the run itself and the deaths of two Naval Academy graduates who were killed in action within weeks of each other, then buried a few rows apart at Arlington National Cemetery.

The run is held nationwide, but this year in Annapolis, Maryland, it’s dedicated to 1st Lt. Travis Manion of the class of 2004 and Maj. Doug “The Lion of Fallujah” Zembiec of the class of 1995.

Both were All-American Navy wrestlers, recalled fondly by Natanya Levioff, who announces Navy wrestling matches and is known as the Voice of Navy Wrestling.

“He and Travis had some legendary moments in the wrestling room,” Levioff recalled. She is also the race director of the 9/11 Heroes Run in Annapolis.

“Travis Manion’s uncle, Chris, wanted to put on an event to remember 9/11 and all the heroes that we lost, not just on that day, but in the wars since,” Levioff said.

Shortly before his death, Manion visited the New York City Fire Department Rescue Company 1, the fire house that lost nearly every member of its crew responding to the twin towers. Having the firefighters thank him for his service as a Marine made a strong impression on Manion.

“He returned home, just prior to deploying, with an incredible understanding and passion — more so than he had before — on why he was doing what he was doing on the ground in Iraq,” Levioff said.

The 9/11 Heroes Run movement, first inspired by Manion’s death 10 years ago, is now held in 50 locations nationwide and on military bases overseas.

But it’s not the only race happening that aims to remember 9/11 and honor servicemen and women.

A local member of the U.S. Coast Guard intends to participate in the 9/11 Memorial 5K & Half in Georgetown on Sept. 10. Shameen Anthanio-Williams remembers watching the events of the day unfold while on the mess deck during shipboard trials in San Diego, California.

“It all happened before our eyes. Within an hour, two hours — all the Navy ships were pulling out, including the Coast Guard ship,” Anthanio-Williams said.

“It was a terrible time in American history,” she said. “Any way that I can bring remembrance to the lives lost — and then, of course, the victory where we were able to overcome despite it all — I definitely want to be a part of the race for that.”

All 9/11 race locations include a one-mile fun run/walk. Participants can register online or on location the day of the event. Local races include ones in Alexandria, Virginia, and Annapolis and Baltimore in Maryland.