After a teacher found a noose at Crofton Middle School on Thursday, family and community members took to the sidewalks to leave messages of kindness and love for students to see Monday.
Listen now to WTOP News WTOP.com | Alexa | Google Home | WTOP App | 103.5 FM
(1/11) 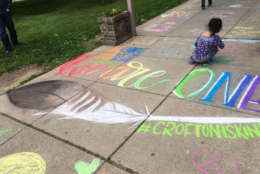 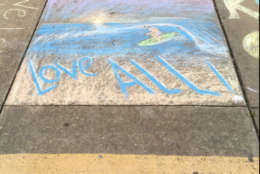 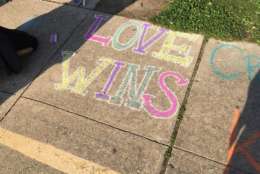 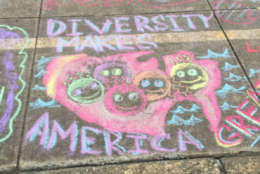 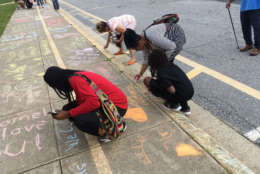 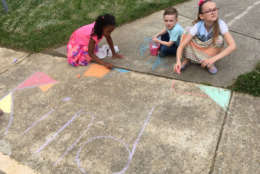 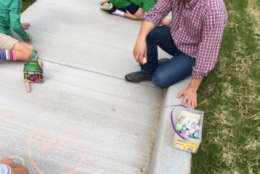 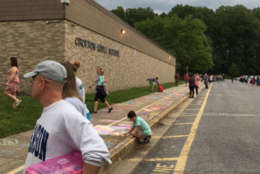 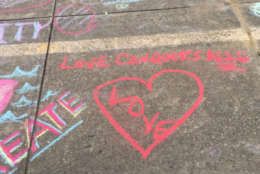 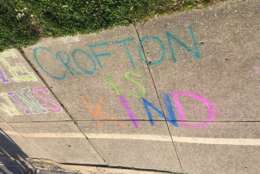 CROFTON, Md. — Families and community members met outside a middle school in Anne Arundel County, Maryland, on Sunday to leave colorful, kind messages just three days after a noose was discovered on campus.

Crofton is Kind founder Kristen Caminiti says she got the idea from another mom whose daughter attends Crofton Middle School. So Caminiti spread the word about chalking sidewalks at the school with positive messages for students to see when they get to school on Monday.

Caminiti gave the assembled group a goal for the event: to cover the entire span of sidewalk in front of the school.

“We are a community of kindness and tolerance and acceptance, and kindness will always be louder than hate,” Caminiti told WTOP.

For some, it was a Mother’s Day family affair.

“It’s imperative that we rewrite the story,” said Ryan Brown. “We know what the incident was, but it’s time to counter that with love, you know, overwhelming love.”

Marlin Guevara and her family also participated. She’s part of the Crofton is Kind community on Facebook. “What great way to express love and kindness to the middle schoolers and to the staff and everyone here in Crofton, actually.”

One family learned about the event while strolling by the school. They saw everyone gathered and went to investigate.

“It’s great to see everybody and the community people all coming out to support each other so that we all know that we’re all equal, we’re all one, we’re all friendly, we should all be kind. It’s great; it’s awesome,” said Crofton resident Shelly Allison.

Two 19-year-old suspects have been arrested and charged in connection with Thursday’s incident: A teacher had found a noose hanging from a light fixture on the outside of the school building, according to Anne Arundel County police.