EXPLAINER: Why did bettors lose on winner of Breeders’ Cup?

DEL MAR, Calif. (AP) — Modern Games won the $1 million Juvenile Turf at the Breeders’ Cup. Anyone who bet on him in certain types of wagers didn’t cash a ticket and got their money back because of a mistake by the veterinarians.

The Ireland-bred colt was the 2-1 favorite in a field of 12 at the world championships on Friday at Del Mar. He was in the No. 1 post position and Albahr was in the No. 2 spot.

Modern Games reared up and hit the back of the starting gate, causing Albahr to flip over and become lodged underneath the gate.

During a delay that lasted about 12 minutes, the crowd of 20, 536 was told that Albahr was scratched. Soon, it was announced that Modern Games was scratched, too. Both are trained by Charlie Appleby.

After a review by the stewards, it was announced that Modern Games would run after all, but for purse money only; no wagering was allowed.

WHAT MISTAKE WAS MADE INVOLVING MODERN GAMES?

“The horse was taken out of the wagering pools when it was racing sound,” said Scott Chaney, executive director of the California Horse Racing Board.

Veterinarian Dr. Chuck Jenkins was the one who called the stewards to report the scratch, Chaney said. Jenkins was part of the vet team assigned to the turf course.

HOW WAS THE MISTAKE MADE?

Jenkins and vet Dr. Dana Stead were behind the gate and saw Modern Games rear and hit himself. They also saw Albahr underneath the gate.

What they didn’t see was an assistant starter in front of the gate open it to let Modern Games out, said Dr. Jeff Blea, the CHRB’s equine medical director.

“They were under the impression (Modern Games) reared back and then busted through the front of the gate, further compounding that horse’s health,” Blea said. “That was the reason the scratch was called in.”

WHAT LED TO THE CONFUSION?

In a regular race in California, there is a single racing veterinarian assigned to call the stewards to report the number and name of a horse being removed from a race. The stewards repeat the information to confirm it.

“To be fair, there are lots of cooks in the kitchen right now,” Chaney said. “A possible solution would be to kind of solidify to one person who can call in a scratch.”

DID THE STEWARDS HAVE TO LET MODERN GAMES RUN?

No, they could have left him scratched. However, once a horse is scratched or removed from the wagering pool it cannot be reinstated. It also would not have been fair to the owner, trainer and jockey when the horse was sound to race, Chaney said.

HOW OFTEN DOES THIS HAPPEN IN HORSE RACING?

While such a thing isn’t unheard of, it’s extremely rare in a major event like the Breeders’ Cup, which brings the world’s top horses together for 14 lucrative races over two days.

HOW ARE ALBAHR AND THE JOCKEY DOING?

WHAT DOES THE RULEBOOK SAY?

According to California Horse Racing Board Rule 1974 (C), if a horse is removed from the wagering pool to start in a race as a non-wagering interest for purse only and is disregarded for betting purposes, the circumstances shall be announced over the public address system at the time the action is taken and thereafter to adequately inform the public. The rule also requires that off-track wagering outlets be notified at the same time.

HOW DID THE CROWD REACT?

Fans booed as the horses returned to the grandstand after the race. There was no immediate word on how much money Del Mar had to refund. All wagers on Modern Games in the win, place, show, exacta, trifecta, superfecta and super high five pools are subject to refund, according to CHRB rules. Daily double and Pick 3 wagers on Modern Games received a consolation payment. In all other multi-leg wagers that ended with that race, bettors with tickets including Modern Games and Albahrm received the post-time favorite, Dakota Gold, unless they designated an alternate for the race.

WHICH HORSE WENT TO THE WINNER’S CIRCLE?

Modern Games got his picture taken in the winner’s circle. He earned $520,000 for Godolphin Stable, which is owned by Sheik Mohammed bin Rashid Al Maktoum, the ruler of Dubai.

WHO WAS THE WINNER FOR THE BETTORS?

The CHRB, Del Mar and the Breeders’ Cup reviewed the circumstances after the race and again on Saturday. As a result, one vet will make the final decision on recommended scratches at the starting gate and has sole authority to inform the stewards.

This story has been corrected to fix the spelling of CHRB executive Scott Chaney. 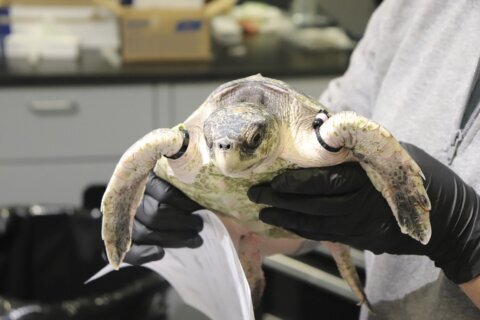