Holidays: 'Enchant' shines with millions of lights in Nats Park | Where to see holiday lights | Send in photos of decorations | How to give greener this season
Home » Animals & Pets » Pets and fireworks: How…

Pets and fireworks: How to keep your animals calm and safe on July 4

Many of our furry friends -- dogs, cats, even ferrets and birds -- go a bit ape when they hear the pops, sizzles and rocket sounds of fireworks. Here's how to help.
Listen now to WTOP News WTOP.com | Alexa | Google Home | WTOP App | 103.5 FM

We may find fireworks beautiful and festive, but they explode like magnified gunfire in the exquisitely sensitive ears of many of our pets.

Measuring between 150 and 175 decibels, fireworks are louder than many planes at takeoff (about 140 decibels). Decibels measure the loudness of a sound while hertz measure the frequency of a sound.

Human ears are damaged at a mere 85 decibels. Yet we can hear to only about 20,000 hertz, while dogs can hear between 45,000 and 65,000 hertz. Just think of the physical and emotional damage that might occur to a dog left outside to face the noise.

Not to mention that when frightened, dogs bolt, and owners may lose their best friends in the night.

“Dogs have been known to dig under or jump over fences, break tethers or even shatter windows in response to their fireworks fears,” according to Best Friends Animal Society, one of the nation’s oldest no-kill agencies.

That leaves dogs running loose, possibly to be struck by cars, picked up by strangers, even turned into local animal shelters, which may still have limited hours due to the pandemic. Anxious pet owners may face barriers in identifying and rescuing their pet.

Danger to all types of pets

Statistics show at least 40% of dogs have noise phobias, which can include fear of thunderstorms, leaf blowers, power drills and even hair dryers. But those noises are relatively constant, experts say, while fireworks are frighteningly sporadic and therefore unexpected.

“Many animals associate loud noises with danger,” said Dr. Michelle Lugones, a veterinarian with Best Friends Animal Society. “From an evolutionary standpoint they are wired to avoid perceived threats, so it’s not surprising that fireworks are distressing to many animals.”

It’s not just dogs. Cats and many other domestic and wild animals have sensitive hearing, provided by nature to find and hunt prey.

“It’s very likely that cats suffer just as much from fireworks phobia as dogs,” Lugones said. “But since cats tend to be more independent in the home and usually run and hide during fearful situations, their owners may just not realize that they are distressed from fireworks.”

Small pets such as rabbits and guinea pigs are prey species and so are easily stressed, Lugones continued, adding that “unfortunately, rabbits can even die from extreme fright especially if they have underlying illness. They may also injure themselves attempting to flee.”

Cows are social animals, Lugones said, so loud noises could spook an entire herd, while horses are also prey species that can easily become startled by fireworks.

“It may be less understood how reptiles and birds respond to fireworks, but they too have stress responses, so precautions should be taken for them,” she said.

Prepare your pet before dark

The key to helping your pet survive this frightening onslaught is being prepared, said Dr. Douglas Kratt, president of the American Veterinary Medical Association.

Tags and microchips. Be sure your pet has a well-fitting collar with current identification tags, Kratt said. If your pet has a microchip, make sure your correct contact info is recorded with the vet clinic or shelter that implanted the chip.

That way, if your pet does escape into the night, you will be able to immediately call and alert the vet or shelter about their absence.

Exercise before dark. A tired dog is a calmer dog. A happy cat is a more relaxed cat, Kratt said. Fit in some extra playtime for your cats, and take dogs out for play and exercise well before dark. Such activities burn off extra energy, thus limiting anxiety later when it’s time to sleep.

Bring all pets indoors. Don’t leave your pet outside to suffer alone. Put a dog’s crate or bed in the quietest, most enclosed room possible, Kratt said.

“Keep windows and curtains closed to further muffle sounds, and take some time to see what works best for your dog, such as lowering the lights or covering the crate with a blanket,” he said.

Cats like to go high to feel secure, so give them a covered cozy cave that is elevated off the ground, like a hut on an indoor cat tree or in a closet.

Distract your pet. Provide lots of new toys and long-lasting chews and treats. Food puzzles may also keep them distracted from the unnerving noises.

Use calming aids. Many pets respond to “thunder” shirts or blankets that wrap them in a heavy, calming cocoon. Cats and dogs often enjoy smelling species-specific pheromones. Cats can wear collars with scents that mimic the pheromone mother cats produce to calm their kittens. Dogs respond to the scent of lactating female dogs, called appropriately “dog appeasing pheromone,” or DAP.

Use calming sounds. First, muffle sounds by closing curtains and doors near your pet. Calming music, or white noise like fans or television — but not too loud — can be used to provide comfortable, familiar sounds.

Humans must stay calm, too. If you aren’t fond of fireworks either, try to remain calm around your pet anyway, Kratt said.

“Our pets may look to us to see how we are reacting and be influenced by our behavior,” he said. “Try not to react too strongly to fireworks or your pets’ distress.”

Use medication as a last resort. While there is nothing wrong with turning to your vet for calming medications, experts worry that pet owners might rely on that first, without doing the behavioral modification tips above. But if you have tried all these ideas and your furry friend is still in a panic, reach out to your vet for advice.

Keep animals away from your fireworks. If your pet isn’t bothered by the noise and you plan to set off your own fireworks, be sure to keep your pet inside and secured. Some dogs may “chase after the bright moving objects and are at risk to be burned or blinded in the process,” says Best Friends Animal Society.

In addition, many fireworks also contain “substances that are toxic if ingested,” so be sure to safely store your fireworks where a pet cannot find them.

The dangers for pets extend past exploding fireworks, Kratt said.

“The Fourth has some other risks for our pets, such as an abundance of unhealthy and accessible foods at parties, dangerous summer heat, and dangerous debris on the ground following fireworks displays,” Kratt said.

Before you let your pet loose in the yard the next day, check it carefully for leftover pieces and parts from exploded fireworks.

“Even if you didn’t set off fireworks yourself, debris can make its way into your yard, where curious animals may pick it up to play with or eat,” Kratt said.

Used and unused fireworks are toxic to pets, Lugones said.

“Depending on the chemicals they contain, fireworks can cause severe gastrointestinal signs such as vomiting, bloody diarrhea, abdominal pain, and foreign body obstruction,” she said. “They can also cause acute kidney failure, difficulty breathing, and seizures. If there’s any concern your pet has ingested fireworks, contact a veterinarian immediately.” 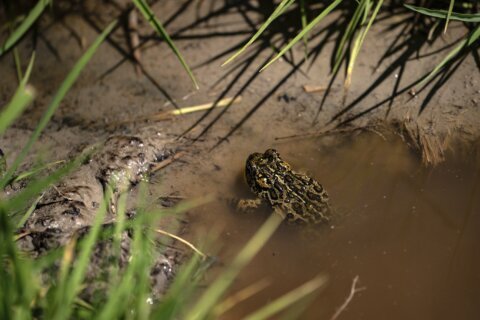