ANCHORAGE, Alaska (AP) — One of the sport’s most popular mushers has announced she will retire from competitive dog mushing after this year’s Iditarod, her 21st entry in the world’s most famous sled dog race.

Musher Aliy Zirkle made the announcement in a retirement letter posted on her website Thursday.

“I don’t want you to think that I’m just up and quitting,” Zirkle wrote, saying this has not been a quick decision.

Zirkle said the Iditarod Trail Sled Dog Race has always been a spectacular adventure for her, but it’s also been physically and mentally demanding.

“And if I’m being honest, at times, I have been challenged to my very core,” she wrote. “I know that in the not so distant future, I will not be able to give it my 100%. So, I am retiring before I have to retire.”

This year’s race will start March 7 near Willow, Alaska, about 50 miles (80.5 kilometers) north of Anchorage. The traditional ceremonial start the day before in Anchorage has been canceled because of the COVID-19 pandemic, which has also led organizers to shorten the nearly 1,000-mile (1,601 kilometer) race to 850 miles (1,368 kilometers).

The race will not go to the Bering Sea coast for its normal finish in Nome. Instead, mushers will travel from Willow to the ghost town of Iditarod and back to Willow for the finish. Forty-seven mushers are signed up to race, the smallest field in two decades.

Zirkle is a fan-favorite though she has never accomplished her goal of becoming the third woman — and first since the late Susan Butcher won her fourth title in 1990 — to win the world’s most famous sled dog race.

She endeared herself to fans with her effusive personality, her ever-present smile and can-do attitude vividly on display during three straight second-place finishes from 2012-2014. Since then, she’s had four other top 10 finishes. Last year, she placed 18th.

She’s also exhibited the tough Alaska persona that one would expect from a competitor in a race that takes about 10 days to finish in elements that requires them to carry an ax. She once broke another woman’s arm during an arm wrestling contest in a Nome bar following one race.

But it hasn’t always been easy for Zirkle, who told The Associated Press in 2017 she had suffered panic attacks and sought therapy after being attacked by a man on a snowmobile on the trail in the previous year’s race.

Arnold Demoski was given a six-month sentence for driving a snowmobile at four-time Iditarod champion Jeff King and Zirkle in separate attacks on March 12, 2016, near the Iditarod checkpoint in Nulato, Alaska. One of King’s dogs, Nash, was killed, and other dogs were injured.

Demoski pleaded guilty to felony criminal mischief and misdemeanor charges of assault, reckless endangerment and driving under the influence.

“Over the course of almost two hours, one man, by using his snowmachine, made prolonged, aggressive and what I believe to be deliberate threats to me and my team,” Zirkle said in a statement just days after the attack. Snowmachines are what Alaskans call snowmobiles.

“I was terrified. Had it not been for my defensive reactions, we could have been maimed or killed,” she said at the time.

She struggled but continued the race, placing third that year. At the finish line, fans chanted her name, hugged her and she even got a bouquet of roses. She credited fans and race volunteers for their support for helping her get through the race.

Zirkle was born in Manchester, New Hampshire, in 1969 and first came to Alaska in 1990, midway through getting a degree in biology from the University of Pennsylvania. She lived in a wall tent on the Alaska Peninsula, counting birds for the U.S. Fish and Wildlife Service.

She went back to college and finished her degree in 1992, and then came right back to Alaska. She and her husband, musher Allen Moore, own a kennel.

They built their home in Two Rivers where they hunt moose in the fall.

Zirkle, who has earned almost $475,000 since her first race in 2001, said her post-Iditarod future is somewhat undecided.

“I love Alaska and will continue to explore our great state. Of course, my husband, Allen, and I will together decide what our next life adventure will be,” she wrote. Zirkle didn’t immediately respond to an email from the AP on Friday seeking more information. 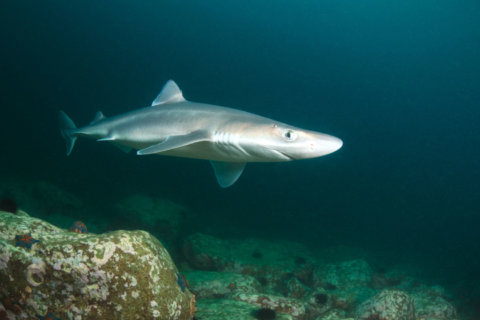