A DNA analysis finds the new giant panda cub at the National Zoo is a boy. The cub is the third of Mei Xiang's to survive. She is the oldest giant panda in the U.S. to give birth.
Listen now to WTOP News WTOP.com | Alexa | Google Home | WTOP App | 103.5 FM
(1/3) 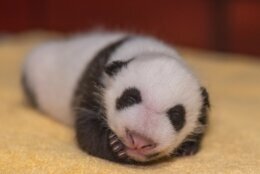 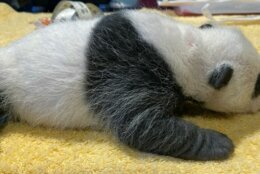 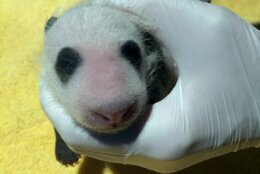 The announcement came in a video released by the National Zoo.

Because male and female panda cubs appear similar at birth, veterinarians obtained a DNA swab from the little guy’s check during the cub’s first check-up last month to determine his sex.

The cub “appears to be healthy and strong,” the zoo said in the Oct. 5 update. Last week, during another brief checkup, keepers took his measurements and announced he weighed in at 3.6 pounds and measured 14 inches from nose to the tip of tail.

Last week, the zoo said the cub’s eyes had started opening. It could take up to eight weeks for the cub to fully open his eyes.

The video Monday featured zookeepers unwrapping a picture decorated with blue paint — to signify the cub’s male sex. Zookeepers who furnished father Tian Tian with blue paint said he painted the picture used in the sex-reveal.

Mother Mei Xiang is the oldest giant panda in the U.S. and the second oldest ever documented in the world to give birth, the National Zoo said. She was artificially inseminated in March and gave birth Aug. 21.

The newest cub is Mei Xiang’s third male cub after Tai Shan, born in 2005, Bao Bao, born in 2013, and Bei Bei, who was born in 2015. As part of the zoo’s cooperative breeding agreement with Chinese wildlife officials, all cubs born at the National Zoo move to China when they are 4 years old. The current agreement expires in December.

A note to would-be visitors looking to get a glimpse of the little furball: The panda house is currently closed to provide quiet for the cub and his mother.

As for what to call the cub? Per Chinese tradition, baby pandas don’t receive their official name until they’re 100 days old, which is Nov. 29. 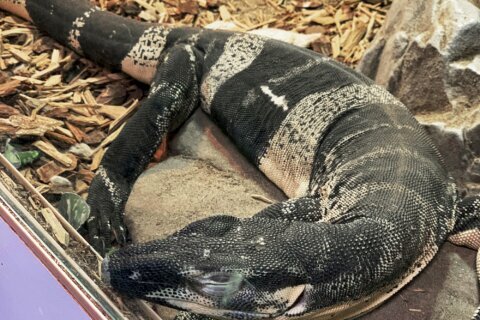