2 bald eagle siblings released together after rehabbing in Virginia 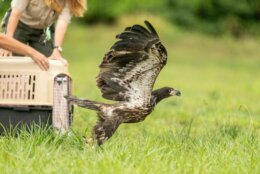 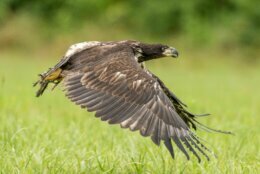 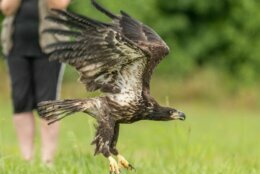 It’s not unusual for the staff and volunteers at Blue Ridge Wildlife Center in Virginia to release an animal into the wild after caring for it.

But on Friday morning, the center in Boyce had a twofer: two young bald eagles were released together.

Dr. Jennifer Riley, the director of veterinary services at the wildlife center, said the two eaglets had fallen from their nest at Widewater State Park in Stafford.

Wildlife rehabilitators often ask the public to refrain from intervening when young birds are out of the nest because often parents are nearby and can take care of their young. But in this case, staff at the park contacted a state raptor specialist, who assessed the two and recommended that they be taken into care.

For the past 11 weeks, the two eaglets were being hand-fed and prepared for a life in the wild, Riley said.

“They were about eight weeks when they came in, so they were still nestlings, but they were starting to get their feathers in,” Riley said.

While caring for wildlife can be tricky, these two eaglets had a few advantages.

The staff at Blue Ridge care for a variety of raptors and have a large aviary, where the birds can “learn to be eagles,” Riley said.

“We initially put them side-by-side with caging walls in between to make sure the adult was comfortable with the babies and wouldn’t try to harm the babies in any way,” Riley said.

It worked out. Within a day they were able to let the young eagles share the same space as the older eagle. Keeping members of the same species together is important, Riley said.

“So that she could help ‘wild them up’ and teach them how to be an eagle and just set a good example for them,” Riley said.

Because eagles scavenge in the wild, as well as hunt for food, the two young eagles should be able to feed themselves, Riley said. They were given fish and meat to discover on their own in their enclosure.

Friday morning was the big day. For their release, the two were taken back to Widewater State Park near where they had been found.

Riley said that while staff had been caring for the eaglets, with three feedings a day, everyone looks forward to the day when the animals are released.