“He was my buddy,” Buchmann said. “My friend, he was my family, really. It was hard.”

Buchmann and Buster made news in 2014 when at age 54 Buchmann found himself homeless with no way to care for Buster, who was then 9-years-old.

He eventually entrusted the dog to Faithful Friends Animal Society on Germay Drive near Elsmere.

Then, every day, rain or shine, Buchmann walked five miles to the shelter to visit Buster and volunteer at the shelter.

Their plight generated massive support after The News Journal ran a story about them in November 2014. Readers helped Buchmann find a job, a vehicle, an apartment and even cash to get resettled.

Buster lived for roughly two years after that, before developing terminal cancer.

Today, Buchmann is no longer homeless — and despite Buster’s death, no longer alone.

Filling the hole Buster left in his life is a foster dog from Faithful Friends: a Staffordshire terrier mix named Matteo.

Buchmann is giving back to the shelter by caring for a dog no one wanted to adopt.

Buchmann grew up in Long Island and moved to Delaware in 2013 after his mother and his sister died within a month of each other.

He worked since graduating from high school, installing fiber optics, doing construction and other things. But when the economy took a downturn, so did his life.

“When I couldn’t pay my rent anymore, I moved across the street into the backyard of an empty house,” Buchmann told The News Journal in 2014. “I pitched a two-man tent, and it was kind of fun for about a week, but it wasn’t good for Buster.”

Desperate, he asked police where he could take the aging canine, so he would be cared for until Buchmann could get on his feet again.

He was given contact information for Faithful Friends Animal Society.

Faithful Friends took Buster in and gave him his own digs.

Executive Director Jane Pierantozzi was surprised, but not unhappy, to come into work and find Buster ensconced in one of the shelter’s meet-and-greet rooms.

“Faithful Friends helped me save my faithful friend,” Buchmann told The News Journal then. “I’ll be grateful forever. I have nothing to complain about.”

After the story, he went from being homeless to having an apartment, a job, a vehicle and a bank account.

One reader started a GoFundMe campaign. After the story went global, donations grew to $34,000.

Someone also donated to Buchmann a used truck, while the Apartment Angels Transitional Housing Project gifted him six months of free rent at Hampton Walk Apartments.

One year later, Buchmann and Buster lived paycheck to paycheck but were healthy and happy.

The truck didn’t work out — where could he fit the 120-pound Buster? — so Buchmann sold it to a co-worker and bought a 2006 Subaru Forester. The $34,000-plus went to getting his finances in order.

Trippe Wayman, president of Wayman Fire Protection, gave Buchmann a job, which he still has.

Buchmann started working for him just before Christmas in 2014, testing and inspecting fire alarm and sprinkler systems.

Wayman’s heard nothing but good things about Buchmann, who shows up on time for work, has gotten himself certified and is moving up the ladder at Wayman Fire Protection.

“It’s not often that these things work out, quite frankly,” said Wayman, who is also a supporter of Faithful Friends, which is less than a mile from his firm.

Shortly before hiring Buchmann in 2014, Wayman adopted a dog named Abbie from Faithful Friends as a companion for Charlie, the adorable Boston terrier featured on the company’s billboards.

Charlie died in August, so Wayman went back to Faithful Friends and started fostering Biscuit, another Boston terrier. He plans on adopting Biscuit soon.

Abbie, who had been depressed since Charlie died, is already in love with the new dog.

Buchmann always said he would resume volunteering at Faithful Friends after getting settled, and he’s remained true to his word, making frequent visits and donations.

The day Buster died, Pierantozzi asked him for a favor. Would he consider fostering Matteo?

The dog was at Faithful Friends since about 2012.

Geannine Checchio, who manages Faithful Friend’s dog department, described the 7- to 9-year-old canine as “reactive” to his surroundings and prone to barking.

“He was definitely one of those dogs who was overlooked because of his behavior in the kennel,” she said.

Matteo was rescued from a house where he and six other dogs lived in small crates. The owner was experiencing mental health issues, Checchio said, and was no longer capable of caring for the animals, so she contacted Faithful Friends.

The dogs were removed from the house two at a time, with Matteo in the last pair. Once at Faithful Friends, it became clear the dog wasn’t fond of women.

Buchmann bonded with Matteo, however, and as a volunteer, took him out on walks.

He took Matteo home for one weekend before officially deciding to foster him. That was all it took for him to decide that the dog would not be going back.

Finally free to roam, Matteo was a completely different animal. He stopped barking and began warming up to people, letting women pet him and hold his leash.

Even when someone knocks on Buchmann’s apartment door, Matteo is quiet. The only thing that really sets him off is the vacuum, Buchmann said.

“When you get animals out of the cage, they’re so much different,” Buchmann said. “He’s got his own bed now, his own couch, his own TV when I leave.”

After Buster died, Buchmann had his friend cremated. He keeps the ashes at home in the same apartment he was gifted in 2014.

“Except now I have to pay,” Buchmann said, laughing.

He wakes up every morning between 3:30 and 4:30 a.m. and takes the foster dog on a walk before going to work. They also go on walks at Canby Park and Alapocas Run, he said.

Buchmann keeps busy, relaxes when he can and said his outlook on things hasn’t changed much.

“Even when I was homeless, I was at peace,” Buchmann said.

He said he owes all the remarkable changes in his life to Buster. If not for the dog, Buchmann thinks he wouldn’t have received those donations in 2014.

“I always say Buster is the one that got me here.” 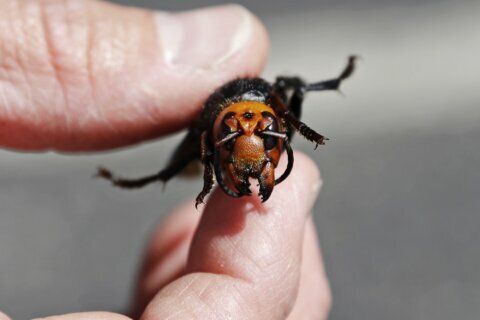