Many birds ingest lead when hunters use lead shot. “You might as well have just shot them in the head, because it kills them just as well," said an expert.
Listen now to WTOP News WTOP.com | Alexa | Google Home | WTOP App | 103.5 FM

WASHINGTON — A bald eagle that died after testing positive for lead poisoning highlights the hazards that lead poses for wild animals.

City Wildlife staff reported the raptor’s death Thursday morning and said that it’s possible that the eagle had other issues that contributed to its death.

Dr. Kevin McGowan, an ornithologist with the Cornell Lab for Ornithology in Ithaca, New York, said many birds ingest lead when hunters use lead shot.

“They either eat meat that has fragments in it or they actually consume a bullet,” said McGowan. “You might as well have just shot them in the head, because it kills them just as well.”

Dan Rauch, a wildlife biologist with the D.C. Department of Energy and Environment, said lead poisoning is “pretty common” in birds and its impact on affected raptors is devastating.

“It can have neurological disorders, it makes them unable to fly, unable to hunt. And if they can’t sustain themselves, it only takes two or three weeks until they’re totally emaciated, and they’re not going to make it,” said Rauch.

In the case of wading and diving birds, many pick up lead sinkers or spent lead shot mixed in with stones. McGowan explained that because birds don’t have teeth, they’ll eat pebbles and seek out hard objects.

“They swallow stones to help them digest their food — to grind up their food in their gizzard.”

And when they pick up stones, he said, they often pick up fishing tackle that anglers may leave behind — much of it containing lead.

Recently, Interior Secretary Ryan Zinke issued an order overturning a ban on the use of lead ammunition and fishing tackle on federal lands.

McGowan said lead poisoning is a threat to birds across the country — not just raptors. “It does affect things like pigeons and doves and quail as well as trumpeter swans and California condors.”

Referring to the loss of the bald eagle at City Wildlife Thursday, Rauch said there may be one bit of good news. It’s early in the mating season for eagles, so if the eagle that died had a mate, it’s still possible it could pair up with another bird.

“Hopefully it’s mate will be able to find someone else, and still have a successful nesting season.” 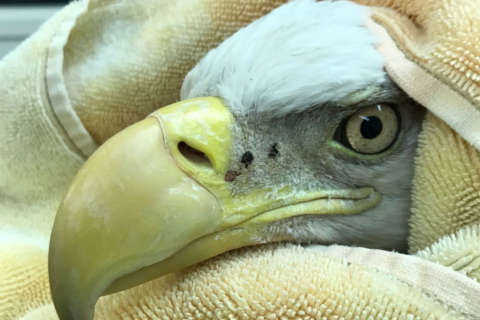