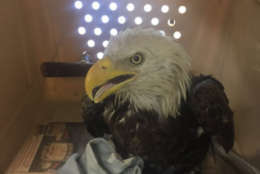 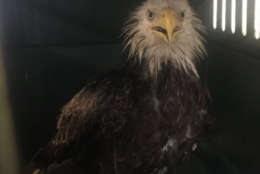 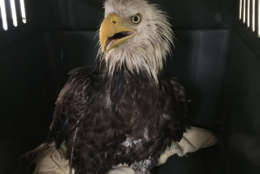 WASHINGTON — An injured bald eagle was rescued in Southeast D.C. Saturday, just in time for the Fourth of July.

The Humane Rescue Alliance reported that its Field Services team rescued an adult bald eagle that was demonstrating labored breathing, lethargy and was unable to fly.

The team caught the bird and transported it to City Wildlife.

The North American species was in danger of extinction some 40 years ago due to the impact of the use of the pesticide DDT, according to the U.S. Fish & Wildlife Service. Habitat protection afforded by the Endangered Species Act, banning of DDT and other conservation activities led to the bald eagles’ recovery.

Two bald eagle couples have hatched eggs and birthed eaglets this year: Liberty and Justice, who have made their home in a tree near the D.C. Police’s training academy in Southeast, have two; and Mr. President and First Lady, nestling at the National Arboretum, have two eaglets.