Guinea junta leader sworn in as president amid uncertainty

CONAKRY, Guinea (AP) — Coup leader Col. Mamady Doumbouya gave no timeline for holding new elections in Guinea as the junta swore him in as president on Friday, though he pledged not to run as a candidate once the vote is organized.

Doumbouya’s inauguration ceremony comes nearly a month after his junta overthrew President Alpha Conde, whose popularity had plummeted after he pursued a third term saying term limits didn’t apply to him.

The West African regional bloc known as ECOWAS then suspended Guinea’s membership and called for the junta to release the 83-year-old Conde, whose exact whereabouts remain unknown.

While the junta has pledged to organize democratic elections, it has yet to outline a timeframe for doing so. Earlier this week, junta members outlined their plans for the political transition, saying Doumbouya would serve as president and a civilian prime minister also would be chosen.

“Neither I, nor any member of the (junta) and the transitional bodies will be a candidate in the upcoming elections,” Doumbouya said. “I ask the people of Guinea to re-establish our nation during this transition period.”

On Friday, he also told Guineans that the country needs a new constitution and an overhaul of its electoral files, both time-consuming endeavors that observers say could be used to delay a future vote.

“I remain unsatisfied because I expected the colonel to give the duration of the transition,” said civil society activist Tafsir Balde. “He did not do so. This makes me a little anxious.”

Conde, Guinea’s former president, had sparked violent street demonstrations last year after he pushed for a constitutional referendum that he used to justify running for a third term, saying term limits no longer applied to him. He ultimately won another five years in office last October, only to be toppled by the coup 10 months later.

At the time he came to power in 2010, he was Guinea’s first democratically elected leader since independence from France in 1958. 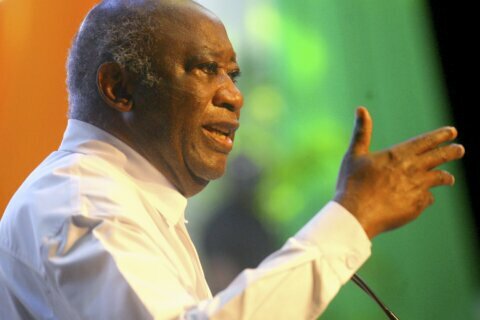