LAGOS, Nigeria (AP) — The Nigerian army says nearly 6,000 Islamic extremists have surrendered in the country’s northeast in recent weeks, marking one of the largest defections since the 12-year insurgency began.

The announcement Thursday by military spokesman Bernard Onyeuko comes several weeks after Nigeria’s army had announced that some 335 militants had laid down their arms.

The mass defections also follow the reported death of Boko Haram leader Abubakar Shekau in May, whose control over the group had been substantially weakened in recent years as a breakaway faction known as Islamic State West Africa Province, or ISWAP, rose to prominence.

ISWAP’s leader has said that Shekau detonated explosives killing himself after a battle between the two groups. Analysts believe some of the militants may now be defecting because they do not want to join ISWAP in the wake of Shekau’s death.

Borno State Gov. Babagana Zulum has supported the surrendering of the militants but he has acknowledged that the defections put the state in a “very difficult situation.”

“We have to choose between an endless war or to cautiously accept the surrendered terrorists, which is really painful and difficult for anyone that has lost loved ones, difficult for all of us and even for the military, whose colleagues have died,” Zulum said last month.

Boko Haram has been waging a bitter war against Nigeria since 2009, and the insurgency has spread over the years to the neighboring countries of Cameroon, Niger and Chad.

The conflict has left tens of thousands dead and displaced more than 2.3 million people in the Lake Chad region. 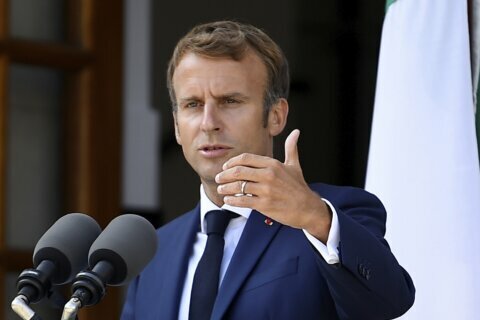 France says head of Islamic State in Sahara has been killed

French president says head of the Islamic State of the Greater Sahara, Adnan Abu Walid al-Sahrawi, has been killed