In coastal villages of Senegal, traditional fishing and processing of the catch is a livelihood and a pride. Women work as processors _ drying, smoking, salting and fermenting the catch brought home by men. But the pandemic devastated this industry that employs hundreds of thousands. Then late last month, a true fishing season began. It's bringing renewed hope, even as challenges remain and women want their voices heard for change.
Listen now to WTOP News WTOP.com | Alexa | Google Home | WTOP App | 103.5 FM
(1/20) 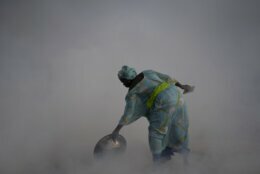 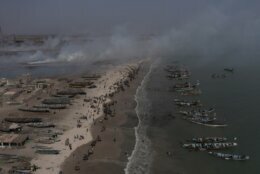 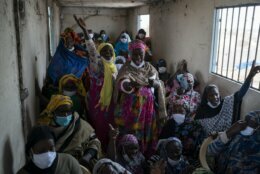 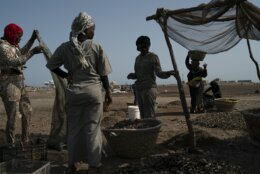 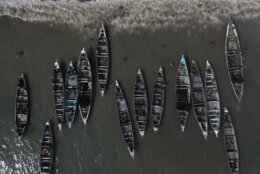 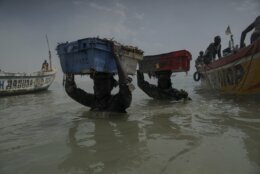 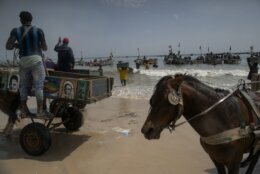 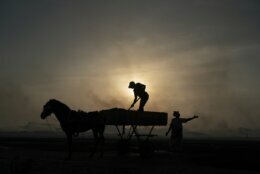 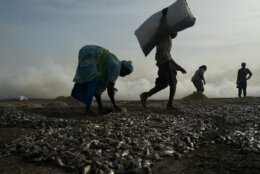 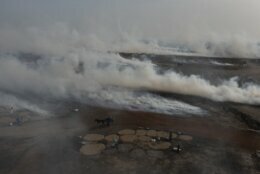 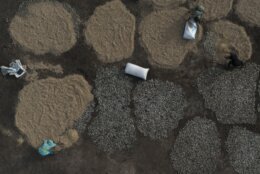 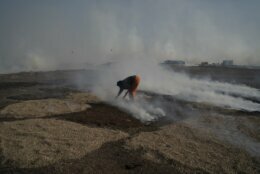 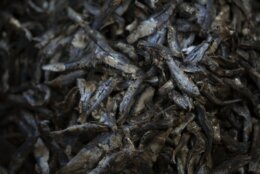 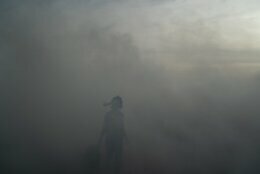 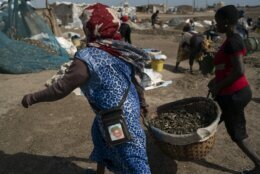 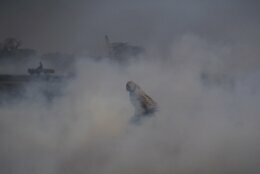 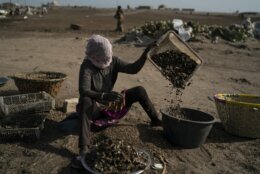 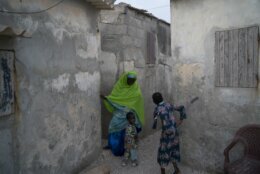 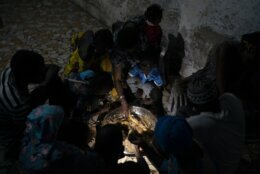 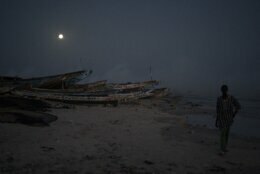 BARGNY, Senegal (AP) — Since her birth on Senegal’s coast, the ocean has always given Ndeye Yacine Dieng life. Her grandfather was a fisherman, and her grandmother and mother processed fish. Like generations of women, she now helps support her family in the small community of Bargny by drying, smoking, salting and fermenting the catch brought home by male villagers. They were baptized by fish, these women say.

But when the pandemic struck, boats that once took as many as 50 men out to sea carried only a few. Many residents were too terrified to leave their houses, let alone fish, for fear of catching the virus. When the local women did manage to get their hands on fish to process, they lacked the usual buyers, as markets shut down and neighboring landlocked countries closed their borders. Without savings, many families went from three meals a day to one or two.

Dieng is among more than a thousand women in Bargny, and many more in the other villages dotting Senegal’s sandy coast, who process fish — the crucial link in a chain that constitutes one of the country’s largest exports and employs hundreds of thousands of its residents.

“It was catastrophic — all of our lives changed,” Dieng said. But, she noted, “Our community is a community of solidarity.”

That spirit sounds throughout Senegal with the motto “Teranga,” a word in the Wolof language for hospitality, community and solidarity. Across the country, people tell each other: “on est ensemble,” a French phrase meaning “we are in this together.”

This story is part of a yearlong series on how the pandemic is impacting women in Africa, most acutely in the least developed countries. AP’s series is funded by the European Journalism Centre’s European Development Journalism Grants program, which is supported by the Bill & Melinda Gates Foundation. AP is responsible for all content.

Last month, the first true fishing season since the pandemic devastated the industry kicked off, bringing renewed hope to the processors, their families and the village. The brightly painted vast wooden fishing boats called pirogues once again are each carrying dozens of men to sea, and people swarm the beach to help the fishermen carry in their loads for purchase.

But the challenges from the coronavirus — and so much more — remain. Rising seas and climate change threaten the livelihoods and homes of those along the coast, and many can’t afford to build new homes or move inland. A steel processing plant rising near Bargny’s beach raises fears about pollution and will join a cement factory that also is nearby, though advocates argue they are needed to replace resources depleted by overfishing.

“Since there is COVID, we live in fear,” said Dieng, 64, who has seven adult children. “Most of the people here and women processors have lived a difficult life. … We are exhausted. But now, little by little, it’s getting better.”

Dieng and her fellow processors weathered the pandemic by relying on each other. They’re accustomed to being breadwinners — one expert estimated that each working woman in Senegal feeds seven or eight family members. Before the pandemic, a good season could bring Dieng 500,000 FCFA ($1,000). Last year, she said, she made little to nothing.

Dieng’s husband teaches the Quran at the mosque next door to their home, and the couple pooled their money with their children, with one son finding work repairing TVs. Other women got help from family abroad or rented out parts of their refrigerators for storage.

They survived, but they missed their work, which isn’t just a job — it is their heritage. “Processing is a pride,” Dieng said.

Most fishing in Senegal is small-scale, and carried out in traditional, generations-old methods, as old as the ways Dieng and other villagers process the fish. They refer to it as artisanal fishing. Once processed, the fish is sold to local and international buyers, and preserving it means it lasts longer than fresh and is cheaper for all who purchase it. In Senegal alone, the fish accounts for more than half of protein eaten by its 16 million residents — key for food security in this West African country.

Industrial fishing is carried out in Senegal’s waters as well, via motorized vessels and trawlers instead of the traditional pirogues, and more than two dozen companies also specialize in industrial processing in the country alongside fishmeal factories and canning plants. The fishmeal factories price women like Dieng out by paying more for the fish and depleting resources — 5 kilos of fish are needed for 1 kilo of fishmeal, a lower-grade powder-like product used for farm animals and pets.

Senegal’s government also has agreements with other countries allowing them to fish off the country’s coast and imposing limits on what they can haul in, but monitoring what these large boats from Europe, China and Russia harvest has proven difficult. The villages say the outsiders are devastating the local supply.

Dieng has become a local leader and mentor whose neighbors increasingly come to her for advice on everything from money woes to their marriages, and she and others are now part of a rising collective voice of women in Senegal working for change along the coast and beyond.

Senegal has designated land near Bargny as an economic zone in its efforts to invest in redevelopment. Dieng’s neighbor Fatou Samba is a town councilor and president of the Association of Women Processors of Fish Products, and she’s testified about the challenges in artisanal fishing. She hopes to stop much of the expansion of big industry as fishmeal companies scoop up fish and send the product to Europe and Asia.

“If we let ourselves be outdone, within two or three years, women will not have work anymore,” Samba said. “We are not against the creation of a project that will develop Senegal. But we are against projects that must make women lose the right to work.”

Samba also warns of the effects of climate change, with rising tides eroding Senegal’s coast and forcing fisherman to seek their catch further out to sea. Samba and Dieng have each lost at least half of their seaside homes as water gutted rooms during the rainy seasons of the past decade.

In addition to their laborious work processing fish, Samba and other women handle the bulk of the work at home.

Dieng, Samba and other women want to be heard — by the government, and by the companies building projects near them. They want better financing, protection of their fish and processing sites, and improved health regulations.

These women open their doors to family, friends, neighbors and even strangers who are eager to hear about the work they take such pride in, and which they want preserved — to help put food on the table for their families and to pay school fees for their children so they can have a future that might not involve fish. But while they’re happy to talk about the work, they hesitate to focus on themselves. Community is what they are most comfortable with.

Late last month, when word spread that fishermen were finally coming back to Bargny with catches, Dieng and others hurried to meet the pirogues, tethered by ropes to the beach. It was the longest Dieng had been away from the catch. She bought enough to have her haul carried by horse-drawn cart to the plot of land she and friends claimed along acres of black sand. Then she started the work she’s known for decades.

Once the fish were piled onto the ground, the women smoothed them out with a small, flat piece of wood. They covered them in light brown peanut shells, bought by the sack, and then lit embers in a bowl and placed those on the shells, which started to burn. Smoke billowed everywhere, a sign of progress. But it also made trying to breathe as brutal as toiling under the hot sun — even tougher during Ramadan, when the women are fasting.

The women stoked the fire, and after feeling confident it would smoke for hours, stepped away. After a day or so, they returned to turn the fish and let it dry in the sun. Another day passed, and the women returned to clean it. Finally, the fish was packaged in vast nets, sold and taken away in trucks.

The pandemic has taught villagers a crucial lesson: Money from fish may not always be there, so it’s important to try to save some of their earnings.

The pandemic also is not over, so Dieng and other women go door to door to raise awareness and urge people to get vaccinated. Like many other countries in sub-Saharan Africa, Senegal imposed strict measures at the start of the pandemic. The government was widely commended for its overall handling of the pandemic, and curfews have been lifted and restrictions largely eased. But the country has had more than 40,000 cases, and both volunteer and government campaigns aim to keep another wave at bay.

At the end of a long day of work, and before she goes home to break fast of Ramadan with her family, Dieng stands in front of her smoking fish and records a video she hopes will to motivate the women working in the industry.

“It’s our gold. This site is all, this site is everything for us,” Dieng said of the coast and its vital importance to Bargny. “All the women must rise up. … We must work, to always work and work again for our tomorrows, for our future.“

Meet the women of Bargny: See the portrait series.

U.S. general: ‘wildfire of terrorism’ on march in Africa