KAMPALA, Uganda (AP) — Ugandan opposition leader Bobi Wine on Monday released a list of 243 people who have allegedly been abducted by the security forces, piling pressure on the government to find those missing amid continuing political tensions after last month’s elections.

Wine, a singer and lawmaker whose real name is Kyagulanyi Ssentamu, has asserted that at least 3,000 of his followers were detained before and after the presidential elections on Jan. 14. President Yoweri Museveni won the polls with 58% of the vote, according to official results that Wine has called fraudulent. Uganda’s top court will hear a case in which Wine seeks to overturn Museveni’s victory.

Wine’s allegations, newspaper reports and statements by diplomats have raised the specter of illegal abductions by state agents in Uganda.

Suggesting that Museveni is responsible for the abductions, Wine posted: “Like all tyrants, he pushed the narrative that all is well, with hundreds of mothers, fathers and siblings in tears over missing loves ones.”

Museveni in a national address on Saturday dismissed allegations that his forces have illegally detained civilians, saying his army “is a disciplined force” and that his party “does not kill” its opponents. But he acknowledged that he had beefed up security ahead of the elections by deploying soldiers from a commando unit previously deployed in Somalia who “killed a few” people he described as terrorists.

Museveni’s admission raised concerns that state agents carried out extrajudicial killings as tensions persist following polls whose outcome is disputed. Local newspapers are dominated by accounts of alleged abductions by security personnel in vans without license plates from which armed men have jumped and grabbed their victims.

Museveni, a former guerilla leader who took power by force in 1986 and has since been elected six times, is popular among many Ugandans for bringing relative stability and security. Museveni himself has castigated former leaders such as Idi Amin, whose regime was notorious for kidnappings and extrajudicial killings.

Some now charge that Museveni’s government is behaving like its predecessors.

“Efforts to find many of them have been in vain. A few have been arraigned before the courts of law while others have been found dumped in jungles and other remote places, often in poor health and bearing torture marks,” human rights attorney Sharon Nakandha said in a column in the local Daily Monitor newspaper, referring to kidnapping victims. “This state of affairs should concern every individual irrespective of political affiliation.”

Nakandha called for an independent commission of inquiry into enforced disappearances.

The United States and the European Union have noted concerns about Uganda’s elections. Natalie E. Brown, the U.S. ambassador, in a recent statement cited “deep and continuing concern about the extrajudicial detention of opposition political party members, the reported disappearance of several opposition supporters, and continued restrictions” on the work of Wine’s party.

Uganda’s 76-year-old president has defied calls for his retirement, saying he has been elected many times by Ugandans who love him. But in elections last month Museveni faced a strong challenge from Wine, whose criticism of corruption and bad governance resonated with young people, including the urban poor. Wine, whose rallies were frequently disrupted by police who accused him of endangering public safety, captured the imagination of many at home and abroad in his generational clash with Museveni.

The elections were marred by violence ahead of polling day as well as an internet shutdown that remained in force until four days after the vote. Facebook remains restricted. 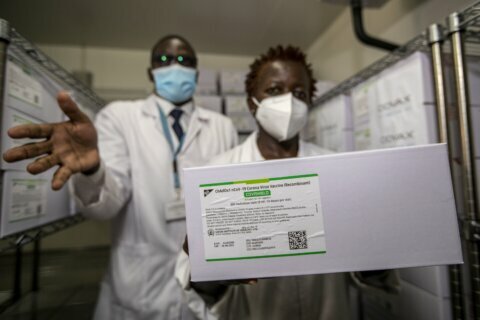 Crocodile hunt: Search on for escaped reptiles in S. Africa