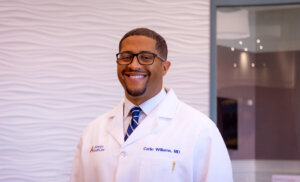 Focused intently on keeping its promise to continue reducing local health care disparities in southern Prince George’s County leaders at Adventist HealthCare Fort Washington Medical Center recently added another surgeon to its roster who specializes in addressing the vascular health issues prevalent in so many members of the community.

Dr. Carlin Williams is, in a sense, returning home to serve as the hospital’s Director of Vascular Surgery. He was born at Joint Base Andrews, where his father was a doctor in the Air Force, and lived in the area for the first eight years of his life. Much of his family still resides locally.

“One of the main reasons that drew me to this job was that it allowed me to come back to family,” Williams said. “It brings me back home and helps me give back to my community and there is no better calling than that.”

Before joining Fort Washington Medical Center, Williams served in the University of Virginia Health System as an assistant professor of vascular and endovascular surgery. He was also medical director of the system’s inpatient vascular surgery unit and noninvasive vascular lab.

He got off to a fast start after being hired in January, immediately performing a number of operations including “hybrid” vascular procedures that previously were unavailable at the hospital. “Being able to start so quickly really underscores our region’s need for vascular surgery services,” Williams says.

Williams described endovascular surgery as being similar to a cardiac catheterization in its minimally invasive approach. Wires are threaded past a narrowing or blockage, and balloons or stents are opened over the wires to treat those specific lesions. “Both open and endovascular techniques have their place. The patient’s anatomy and pre-existing medical problems help us make our decision as to which technique is best. We tailor our approach to the individual patient. This is what patients need,” Williams says.

Recruiting Dr. Williams is part of a grander vision for the future outlined by hospital leaders. It includes a larger, state-of-the-art hospital with a robust provider network and a long list of specialty services. This garrison of providers will be spread more evenly across a region where residents too often face a lack of options when it comes to their health.

Adventist HealthCare Fort Washington Medical Center is committed to helping residents find medical care close to home so they no longer need to travel across county or state lines.

“There is an energy and a buzz in the air related to growing as a facility, and there is just a pervasive, positive attitude,” Williams said. “I have never seen so many helpful and nice people at a hospital in my life.” 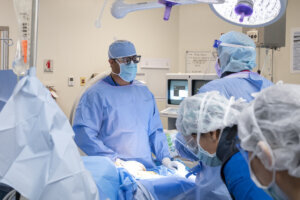 The vascular system is comprised of vessels that carry blood all throughout the body; and having a doctor that specializes in that complex field is a critical component in expanding health care options locally in southern Prince George’s County.

Williams said much of the vascular surgery he performs is related to atherosclerosis, which is a slow but steady thickening or hardening of arteries caused by a buildup of plaque.

“It is a bit of a time sensitive diagnosis in that you can lose a lot of ground within just a few weeks if you don’t care for it quickly,” Williams said.  “Having somebody right there in the community helps to mitigate that.”

Additionally, atherosclerosis is not something that can be totally cured, meaning patients will likely need multiple doctor visits and sometimes multiple operations throughout their life.

“It’s great to have that continuity if you are dealing with the same person every time who is right in your backyard,” Williams said, referring to patients who can go to a local doctor and don’t have to travel for care.

Signs and symptoms may develop slowly as plaque gradually builds up in the artery. Symptoms may vary depending on the affected artery, but Williams said patients often notice problems with their lower extremities.

“If you are having issues walking a certain distance and your legs are cramping or if you have pain in your foot while resting, that is a vascular situation and a symptom that I would definitely have people look out for,” Williams said.

“I am looking forward to making a contribution here, where my family currently lives and where I spent my early childhood,” Williams said. “I want to become a partner in health to the residents of southern Prince George’s County.”

To learn more about refined patient care at Fort Washington Medical Center, and to find a physician, please visit www.AdventistFWMC.com/ForYou. 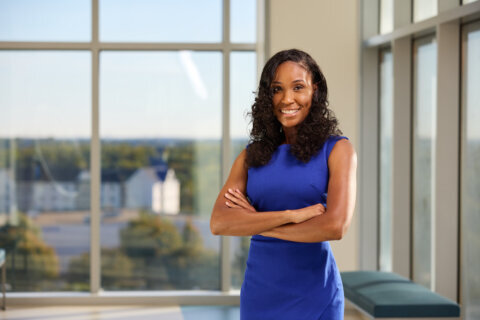 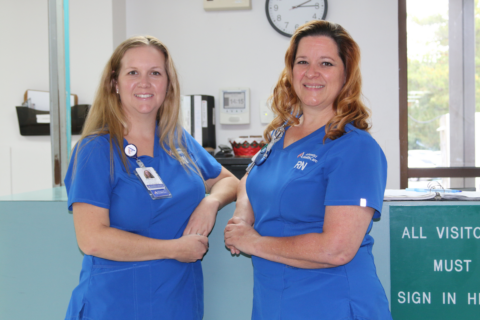 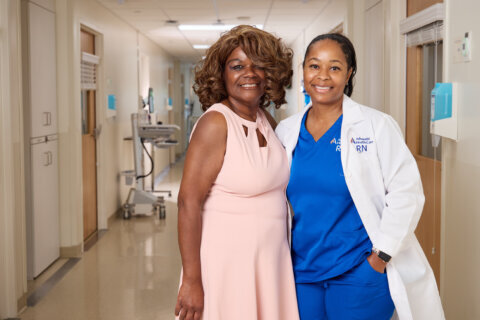