The Palestinian Health Ministry identified the teenager as Omar Khumour and said he died after being struck in the head by a bullet during an Israeli military raid into Dheisha refugee camp near the city of Bethlehem. Crowds of Palestinians full of rage massed outside the hospital where he died in Bethlehem, chanting against Israel and praising God.

The Israeli army said forces entered the Dheisha camp and were bombarded by Molotov cocktails and rocks. It said soldiers responded to the onslaught with live fire.

The death of Khumour brings the toll of Palestinians killed by Israeli fire in the West Bank so far this year to 14, including three people under the age of 18, according to a tally by The Associated Press.

Violence and unrest have raged for months in the occupied West Bank, which Israel captured in the 1967 Mideast war, along with east Jerusalem and the Gaza Strip — territories the Palestinians want for their hoped-for state. Some half-million Israelis now live in about 130 settlements across the West Bank, which the Palestinians and much of the international community view as an obstacle to peace.

The Israeli military has been conducting near-nightly arrest raids in the territory since last spring. The raids were prompted by a wave of Palestinian attacks against Israelis that killed 19 people, while another 10 Israelis were killed in a second string of attacks later last year.

Israel says the raids are meant to dismantle militant networks and thwart future attacks. The Palestinians see them as further entrenchment of Israel’s open-ended, 55-year occupation of lands they seek for their future state.

Nearly 150 Palestinians were killed by Israeli fire in the West Bank and east Jerusalem in 2022, according to figures by the Israeli rights group B’Tselem, making it the deadliest year since 2004.

Israel says most of the dead were militants. But Palestinian stone-throwers, youths protesting the incursions and others not involved in confrontations also have been killed. 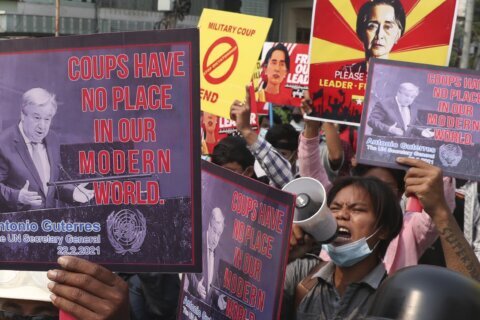