Burkina Faso has been wracked by violence linked to al-Qaida and the Islamic State group that has killed thousands and displaced nearly 2 million people — creating a growing humanitarian crisis. Lack of faith in the government’s ability to stem the violence has led to two military coups this year.

While no reason was given in the statement for her expulsion, foreign minister Olivia Rouamba said on state television Friday that Manzi had raised the alarm about insecurity in the capital, Ouagadougou, without providing evidence.

“She affirmed that she has information from reliable sources without agreeing to give any proof,” Rouamba said. She also said Manzi told her she was in touch with “terrorist leaders” and questioned how Manzi was able to easily access the besieged town of Djibo in the Sahel region while the country’s security forces were unable to.

Manzi, who was appointed U.N. Resident Coordinator in August last year, often traveled to hard hit parts of the country to try to raise awareness about the deteriorating humanitarian crisis. The Italy native has extensive experience with the U.N., working as the head of the U.N. Office for the Coordination of Humanitarian Affairs (OCHA) in Ukraine, Iraq, Myanmar and Sri Lanka. Before Burkina Faso, she was the resident coordinator in Djibouti.

The United Nations wouldn’t immediately comment on the decision. Diplomats in Burkina Faso said they were caught by surprise, according to a Western official who wasn’t authorized to speak to the media.

Manzi’s expulsion comes amid a government crackdown on the international community. Last week, two French citizens were expelled from the country over accusations of espionage, and earlier this month, the government suspended French broadcaster Radio France Internationale for having relayed an “intimidation message” attributed to a “terrorist,” according to a statement from the junta.

The decision to expel Manzi is a worrying sign and will make it harder for humanitarian groups to operate, aid organizations say.

“The abhorrent decision to designate Barbara Manzi, the U.N.’s humanitarian coordinator/resident coordinator, a PNG (persona non grata) is a sign that this dangerous trend line not only continues under the current regime but is worsening,” said Alexandra Lamarche, senior fellow at Refugees International.

“Over the years, these types of intimidation tactics have attempted to force aid groups not to report on the true extent of the crisis or the government and national security forces’ role in perpetuating violence against civilians, forcibly them, and fueling humanitarian needs,” she said. 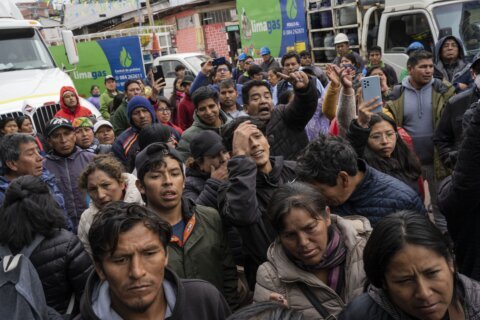