Coronavirus News: Fairfax Co. votes to increase substitute teacher pay | Is it time to get a COVID-19 booster? Which one? | Local cases of COVID-19 | How many in DC region are vaccinated?
Home » World News » Son demands Iran free…

WASHINGTON (AP) — The son of an Iranian-American man who has been detained in Iran for more than five years…
Listen now to WTOP News WTOP.com | Alexa | Google Home | WTOP App | 103.5 FM

WASHINGTON (AP) — The son of an Iranian-American man who has been detained in Iran for more than five years called for his father’s immediate release on Monday so that he can receive emergency and potentially life-saving surgery.

Baquer Namazi, 84, requires an operation within days to clear up a severe blockage in the main artery that supplies blood to his brain, according to his son, Babak, and the family’s lawyer, Jared Genser.

“My father has already lost so much precious time. I’m begging Iran to let him spend whatever small amount of time he has left with his family,” Babak Namazi told reporters Monday in urging Iran to lift a travel ban that has kept his father inside the country.

The elder Namazi, a former UNICEF representative and dual Iranian-American national, was detained in 2016 when he traveled to Tehran to see his son Siamak Namazi, a businessman arrested in Iran months earlier. Both Namazis were sentenced to 10 years in prison in Iran on what the United States and United Nations say were trumped-up spying charges.

Baquer Namazi was granted medical furlough in 2018 and his sentence was subsequently commuted to time served, but Iranian authorities have not permitted him to leave the country. Siamak Namazi remains jailed in Iran’s notorious Evin prison, and Babak Namazi reiterated Monday his demands for his brother’s release as well.

Baquer Namazi’s doctors have said that he needs surgery within seven to 10 days to avoid a potentially catastrophic stroke, his son said. Namazi’s supporters have made their demands known to Iran, but are also seeking direct intervention from President Joe Biden’s White House.

The legal team appealed for help Monday from the U.N. Special Rapporteur on the Right to Health, writing in a detailed document that “due to the severity of his medical problems, Baquer especially faces high risk of mortality unless Iran rapidly reverses course.”

Later in the day, State Department spokesman Ned Price said the Biden administration repeatedly raises with Iran its concerns about “Americans and other foreign nationals who are unjustly held against their will.” And Secretary of State Antony Blinken tweeted that Iran should allow Namazi “to seek the medical attention necessary to save his life.”

Blinken added: “It’s been almost six years since he’s seen his children. At a time like this, he should be surrounded by his entire family.”

Advocates for the elder Namazi say they’re desperate that he be treated outside of Iran given how overwhelmed hospitals there have been with treating COVID-19 patients and the risk that poses to his health. If he is not permitted to leave within days, Babak Namazi said, his father will have to undergo the operation in Iran — a less than ideal scenario.

“If it’s between him dying and not dying, of course it’s an option,” Babak Namazi said. 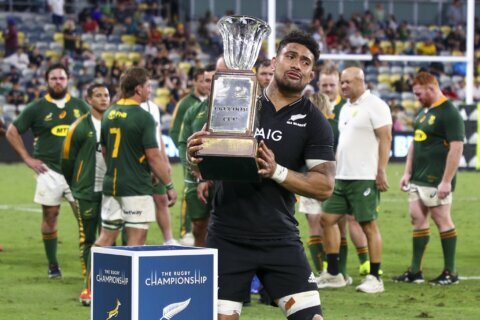