Panicked tourists in Turkey hurried to the seashore to wait for rescue boats Saturday after being told to evacuate some hotels in the Aegean Sea resort of Bodrum due to the dangers posed by nearby wildfires.
Listen now to WTOP News WTOP.com | Alexa | Google Home | WTOP App | 103.5 FM
(1/16) 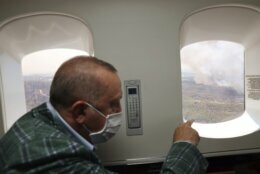 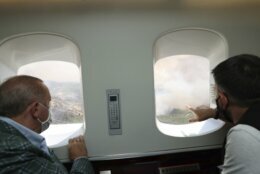 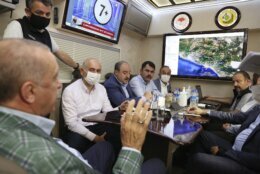 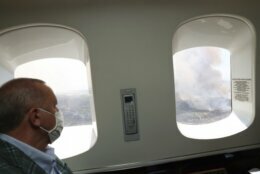 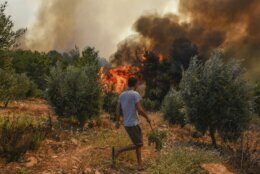 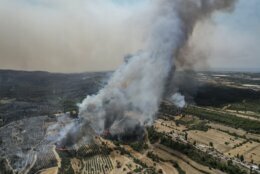 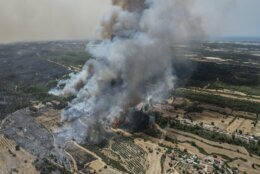 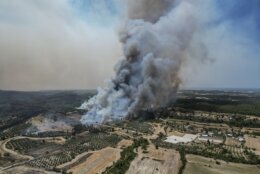 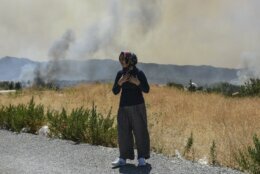 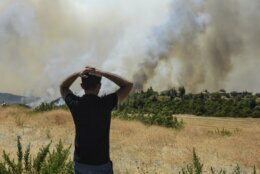 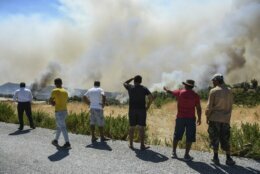 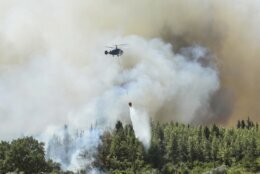 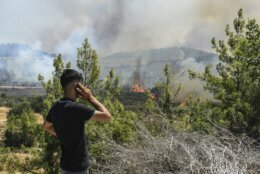 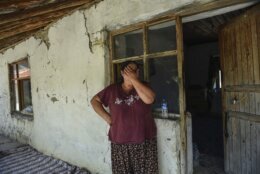 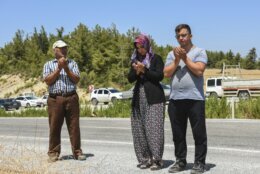 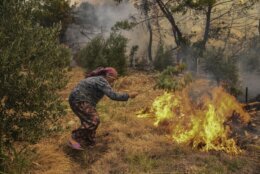 ISTANBUL (AP) — Panicked tourists in Turkey hurried to the seashore to wait for rescue boats Saturday after being told to evacuate some hotels in the Aegean Sea resort of Bodrum due to the dangers posed by nearby wildfires, Turkish media reported.

Coast guard units led the operation and authorities asked private boats and yachts to assist in evacuation efforts from the sea as new wildfires erupted. A video showed plumes of smoke and fire enveloping a hill close to the seashore.

The death toll from wildfires raging in Turkey’s Mediterranean towns rose to six Saturday after two forest workers were killed, the country’s health minister said. Fires across Turkey since Wednesday have burned down forests and some settlements, encroaching on villages and tourist destinations and forcing people to evacuate.

The Russian news agency Sputnik said more than 100 Russian tourists had been evacuated from Bodrum and relocated to new hotels.

In one video of the Bodrum fire filmed from the sea, a man helping with the evacuations was stunned at the speed of the fire, saying “this is unbelievable, just unbelievable. How did this fire come (here) this fast in 5 minutes? ” He was not named in the video.

The minister of agriculture and forestry, Bekir Pakdemirli, said Saturday that 91 of the 101 fires that broke out amid strong winds and scorching heat have been brought under control. Neighborhoods affected by the fire in five provinces were declared disaster zones.

Speaking from the town of Manavgat, Erdogan announced that the Turkish government would cover the rents for people affected by the fire and rebuild their homes. He said taxes, social security and credit payments would be postponed for those affected and small businesses would be offered credit with zero interest.

“We cannot do anything beyond wishing the mercy of God for the lives we have lost but we can replace everything that was burned,” he said.

Erdogan said the number of planes fighting the fires had been increased from six to 13, including planes from Ukraine, Russia, Azerbaijan and Iran, and that thousands of Turkish personnel as well as dozens of helicopters and drones were assisting the firefighting efforts.

In a speech from Marmaris on Saturday night, Erdogan said one of the fires there had been started by children and other investigations were ongoing.

At least five people have died from the fires in Manavgat and one died in Marmaris. Both towns are Mediterranean tourist destinations. Tourism is an important source of revenue for Turkey, and business owners were hoping that this summer would be much better than last year, when pandemic travel restrictions caused tourism to plummet.

Health Minister Fahrettin Koca said 400 people affected by the fires in Manavgat were treated at hospitals and released, while 10 others were still hospitalized for fire injuries. In Marmaris, 159 people were treated at the hospital and one person was still undergoing treatment for burns.

In southern Hatay province, flames jumped into populated areas but were later apparently brought under control.

Wildfires are common in Turkey’s Mediterranean and Aegean regions during the arid summer months.

Meanwhile, a heat wave across southern Europe, fed by hot air from Africa, has led to wildfires across the Mediterranean, including in Italy and Greece.

Firefighters on the Italian island of Sicily on Saturday battled dozens of blazes fueled by high temperatures, prompting the region’s governor to request assistance from Rome. Some 150 people trapped in two seaside areas in the city of Catania were evacuated late Friday by sea, where they were picked up by rubber dinghies and transferred to Coast Guard boats.

In western Greece, a wildfire that broke out Saturday forced the evacuation of four villages and people on a beach by the Fire Service, the Coast Guard and private boats.

The Civil Protection Agency sent text messages to the residents of four villages — two in the mountains and two by the sea — to evacuate. Local media said some villagers refused to leave and were trying to fight the fire with garden hoses.

Temperatures in Greece and nearby countries in southeast Europe are expected to climb to 42 degrees Celsius (more than 107 Fahrenheit) Monday in many cities and towns.