GENEVA (AP) — Delegates from Libya’s warring factions on Friday selected four leaders to guide the North African country through to national elections in December in a major — if uncertain — step toward unifying a nation with two separate governments in the east and west.

In what could become a landmark achievement to end one of the intractable conflicts left behind by the Arab Spring a decade ago, the 74 delegates chose a list of candidates in a U.N.-hosted process aimed to give balance to regional powers and various political and economic interests.

Mohammad Younes Menfi, a Libyan diplomat with a support base in the country’s east, was chosen to head the three-person Presidential Council. Abdul Hamid Mohammed Dbeibah, a powerful businessman backed by western tribes, was chosen as interim prime minister.

The U.N. process, known as the Libyan Political Dialogue Forum, was aimed at choosing an interim authority to oversee Libya as part of an effort to rebuild state institutions and lead to national elections planned for Dec. 24.

Menfi’s list was elected in a runoff as none of four lists initially proposed secured the required 60% of votes from the delegates in the first round. The mandate came after a relatively close vote: 39 to 34, with one abstention.

Capping a U.N.-led diplomatic process that began in Berlin in January last year, forum delegates began meeting on Monday in an undisclosed location near Geneva, before reducing their selection on Friday to four, then two, and finally one list of candidates for interim prime minister and the council.

The voting took place under the mediation of the U.N. secretary-general’s acting special representative for Libya, Stephanie Williams, in hopes to bring stability to an oil-rich North African country that has been largely lawless since Moammar Gadhafi was toppled and killed in 2011.

“I am pleased to witness this historic moment,” Williams said after the results. “The decision that you have taken today will grow with the passage of time in the collective memory of the Libyan people.”

“Our bet was that you would be able to build a truly Libyan-owned solution, and that is what you have done,” she said, addressing the delegates. “The challenges are not behind you.”

Under outlined steps, Dbeibah must now form a Cabinet and present its program within three weeks. Williams said the interim government must fully support a cease-fire, uphold the election date and launch “a comprehensive national reconciliation process.”

In Washington, U.S. State Department spokesman Ned Price told reporters that the Biden administration fully supports “this outcome of the U.N.-facilitated process that will lead to a stable, secure Libya and elections in December 2021.”

Shortly afterward, the U..S., Britain, France, Germany and Italy released a joint statement welcoming the step and urging all of Libya’s factions to work together in support of it. “We call on all current Libyan authorities and actors to ensure a smooth and constructive handover of all competences and duties to the new unified executive authority,” the statement read.

Since 2015, Libya has been divided between two governments, one in the east and another in the west of the country, each backed by a vast array of militias. In April 2019, Khalifa Hifter, a military commander allied with the eastern government, launched an offensive to seize the capital, Tripoli. His campaign failed after 14 months of fighting and last October, the U.N. convinced both parties to sign a cease-fire agreement and embark on a political dialogue.

The list that got the highest number of votes in the previous round — but ultimately lost to the Menfi-Dbeibah list — included Aguila Saleh, the politically savvy speaker of Libya’s eastern parliament who ran to head the council, and Fathi Bashagha, the powerful interior minister in the western government.

On his Twitter page, Bashagha conceded to the winners and hailed the U.N.-mediated electoral process as “the full embodiment of democracy” — and wished the new government success in running the country.

Jalel Harchaoui, an expert on Libya with the Global Initiative against Transnational Organized Crime, said both lists of finalists were “flawed and problematic,” and expressed doubts about a possible reconciliation.

“Hifter and eastern tribes do not feel they are represented. I suspect a profound disappointment in the east,” he said. Such discontent could present a “path to partition,” he said, warning of possible east-west clashes in coming weeks.

At a news conference, Williams said Hifter’s representatives were “in the room today,” and were “amongst those who agreed that they would accept the results of the vote.”

Another key unknown is how the international community — and in particular, as many as nine countries that have backed opposing sides in Libya — will respond to the vote.

U.N. Secretary-General Antonio Guterres called the election “very good news” and “a breakthrough” in the search for peace after nearly 10 years. “Libya is moving in the right direction” and “it is absolutely essential to unify Libya and to move onwards on the way to peace,” he said.

The internationally recognized government in Tripoli has had the backing of Turkey while Hifter has been supported by countries including Egypt, Russia, and the United Arab Emirates.

The voting process was aired live on several Libyan television channels and streamed on the UNTV website.

Guterres welcomed the newly elected leaders’ pledges “to form a government reflecting political pluralism, geographical representation, and its commitment to include no less than 30% of women in executive positions, as well as to ensure the participation of youth.” He appealed to all key Libyan actors to accept the results, and also urged all foreign fighters and mercenaries in the country to withdraw to Tripoli and Benghazi, and then go home.

Some Tripoli residents expressed relief that the election was over, hoping the new authorities would improve their daily lives.

“I hope the government will bear its responsibility and think of the crises women and children face and take care of them,” said Fatima Mohamed, a school teacher.

“The Presidency Council should stand by the people who suffered from the lack of liquidity in banks, shortage of gasoline, and the lack of chances for a better life,” she added.

Success in the longer term is far from certain, analysts said.

Federica Saini Fasanotti, a Libya expert at the Italian Institute of International Political Studies, hailed the moment for Libyans as important for their future but added that it was “premature to give any judgment.”

“The road ahead for the elections is still very long and full of holes,” she said. 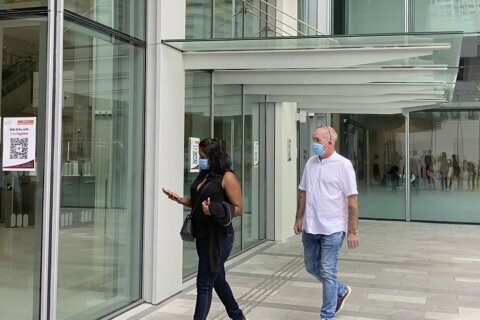