WELLINGTON, New Zealand (AP) — High winds and harsh reality blew away American Magic’s hope of a fairytale return to the America’s Cup challenger series when Italy’s Luna Rossa won both races Friday on the first day of the best-of-seven semifinals.

The return to competition of the U.S. team’s race boat Patriot only 12 days after it capsized, was holed and came close to sinking during a round-robin race against the Italian team was enough to spark the admiration and imagination of any sporting romantic.

But pragmatism intruded when Luna Rossa Prada Pirelli sailed clinically in tough conditions at Auckland to win the first race by 2 minutes, 33 seconds and the second race by 3 minutes, 7 seconds.

With two more races on Saturday, two on Sunday and a tiebreaker if required on Tuesday, Luna Rossa needs only two more wins to progress to a Prada Cup final showdown with Britain’s INEOS Team UK. The winner of the Prada Cup will take on defender Team New Zealand in the America’s Cup regatta in March.

“Tomorrow we come back out swinging, that’s all you can really do” American Magic skipper Terry Hutchinson said. “We know Luna Rossa is a formidable team and, on top of the conditions today just being hard, I think we just have to sail better.”

If American Magic could take anything positive from its start to the semifinals it was that Patriot stood up to some of the toughest conditions teams have had to contend with in the regatta so far. The wind was regularly only a couple of knots below the 21 knot upper limit in which racing could take place and there were severe gusts at the top mark.

Patriot also showed impressive speed, edging over 53 knots (61 mph, 98 kph) near the top mark in the first race. But there were tactical, handling and control issues aboard the American boat which lost both starts and crashed badly at the last mark in the first race, losing almost two minutes.

Coming into the mark at more than 50 knots, Patriot made a wide turn, reared up and landed heavily, falling off its foils and sailing outside the course boundary before being able to fly again.

American Magic also lost control on the sixth leg of the second race, slid sideways and fell off its foils, conceding a lead of almost 2 minutes after six of eight legs.

The starts were important Friday and Luna Rossa’s Australian-born helmsman James Spithill won both, allowing the Italian boat to lead around the course in both races. Luna Rossa seemed to have made a considerable leap forward since the round-robin stages when it looked best in light winds.

It was fast and stable in Friday’s higher winds and was well sailed by Spithill and Francesco Bruni. There was one nervous moment when Luna Rossa rounded the bottom mark for the first time in the second race, seemed to be caught by a puff of wind, slid sideways and for a second wavered on the edge of control.

But the Italian team quickly recovered and Luna Rossa extended its lead at every mark. As it crossed the line Bruni could be heard cheering his teammates: “good job boys…good show, good show.”

“We’re super happy,” Bruni said. “Winning a race in so much wind is always really good.

“I think it’s hard for any boat in such a gusty top mark. It’s almost worse when you have 20 knots and a puff to 30 knots when you’re bearing away and the rudder is always on the edge. We don’t want big rudders, we want go fast but you seem to miss control at the top mark.”

American Magic seems to have particular control problems with its small rudder and when the mainsail is eased and it comes to the top mark powered up. New Zealand-born skipper Dean Barker was pleased simply to have been able to race Friday.

“I think we’re getting confidence back in the boat with everything that happened and it’s just fantastic to get back out there,” he said. “We’re going to be fighting all the way to the end.

“he guys have done an amazing job just to get the boat back on the water from where we were 10 days ago.” 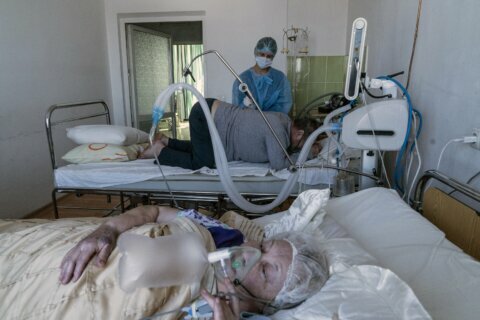 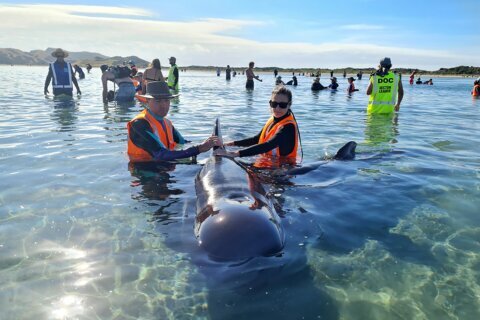