President Joe Biden ended the summer on a legislative winning streak, chalking up victories that once appeared out of reach in this polarized capital. Now he wants to make sure voters reward him for that when they cast ballots in November's big congressional elections.
Listen now to WTOP News WTOP.com | Alexa | Google Home | WTOP App | 103.5 FM

WASHINGTON (AP) — President Joe Biden ended the summer on a legislative winning streak, chalking up victories that once appeared out of reach in this polarized capital. Now he wants to make sure voters reward him for that when they cast ballots in November’s big congressional elections.

It’s a tough task with gas and grocery prices still painfully high and the daily political news awash with contentious investigations into his predecessor and with repercussions in the states from the Supreme Court’s ruling on abortion.

In an attempt to cut through it all, the White House is escalating its campaign to promote new laws designed to repair the economy and help consumers on a personal level, boosting crucial computer chip manufacturing, lowering prescription drug prices, expanding clean energy and revamping the country’s infrastructure.

Biden, in a meeting with his Cabinet on Tuesday, said his administration has passed “extraordinary parts of our economic agenda” and provided “proof that democracy can deliver for the people.”

His schedule is filling up with trips to promote his policies — Ohio on Friday, Michigan next week — in battleground states where Democrats are facing tight races with Republicans. And his administration is rolling out plans to distribute hundreds of billions of dollars authorized by legislation he has signed.

The president chose John Podesta, a veteran of Democratic administrations, to lead the $375 billion plan for reducing greenhouse gas emissions to fight climate change. The money is included in a huge bill — dubbed the Inflation Reduction Act by the White House — which also generates new tax revenue to reduce the deficit and limits the cost of prescription drugs.

“People believe that the legislative accomplishments are meaningful when they can feel them or see them,” William Galston, a senior fellow at the Brookings Institution who served as a domestic policy adviser to President Bill Clinton, said in an interview.

Commerce Secretary Gina Raimondo announced Tuesday that the administration is preparing to divvy up $50 billion in federal assistance to the computer chip industry, part of a new law known as the CHIPS and Science Act. Companies can apply by February, she said, and the money will be distributed after that.

“With this funding, we’re going to make sure the United States is never again in a position where our national security interests are compromised or key industries are immobilized due to our inability to produce essential semiconductors here at home,” Raimondo said at a White House briefing.

Many of the policies won’t pay dividends for months or years to come. Grant applications must be filed and vetted, new bridges have to be designed, regulations written.

But Biden is seizing opportunities to argue that the legislation is already having an impact. On Friday, he’s going to Ohio for the groundbreaking of Intel’s new computer chip factory, which Biden called “the biggest investment of its kind ever in our nation.”

The factory was announced earlier this year, but the company said in June that it would be delayed because Congress had not yet passed the CHIPS Act.

“We’re finally bringing home jobs that had been overseas for a while,” he said Tuesday.

Rep. Tim Ryan, a Democrat who is running against Republican J.D. Vance for the U.S. Senate seat being vacated by Sen. Sherrod Brown, plans to join Biden at the event.

Biden makes another trip on Sept. 14 to the Detroit Auto Show to talk about manufacturing electric vehicles in the U.S. as he tries to pair ambitious goals for reducing emissions with promises of new jobs.

His big-money Inflation Reduction Act includes rebates for the purchase of electric cars, although many vehicles won’t qualify because they must include batteries built in North America with minerals mined or recycled here.

This summer’s legislative victories helped Biden vanquish the hardening narrative that Democrats were failing to accomplish much of significance despite controlling the White House and both chambers of Congress. The president plans to hold still another event to celebrate the Inflation Reduction Act, even though he signed it last month.

However, holding voters’ attention could prove difficult. Inflation has cooled somewhat but prices remain high, eating away at pocketbooks despite low unemployment and rising wages.

“Compared to where the administration was at the beginning of 2022, the accomplishments are impressive and several of them were accomplished against the odds,” Galston observed. “That said, I continue to believe that circumstances on the ground, as experienced by voters and citizens, are much more influential in determining voter choice than lists of legislative accomplishments.”

Biden has also been leaning on other issues in hopes of driving up Democratic turnout in November. He delivered a speech last Thursday in Philadelphia where he described Donald Trump as a threat to democracy, and he’s focused on the proliferation of abortion restrictions in states run by Republicans. The new laws have taken effect in the wake of the Supreme Court’s decision to overturn Roe v. Wade, the landmark 1973 ruling that legalized abortion nationwide.

At the same time, Biden’s approval rating has been ticking upward. The latest Gallup poll showed him with an approval rating of 44%, up from his lowest level of 38% in July.

“These are not good numbers,” Galston said. “But at least he’s not sinking and drowning. And there’s hope that his nostrils will clear the water line in the not-too-distant future.”

Treasury Secretary Janet Yellen will embark on a month-long tour touting Biden’s achievements ahead of the midterms, starting in Detroit on Thursday.

She’s expected to meet with business owners and local leaders before delivering a speech. In addition to talking about modernizing the IRS and cracking down on tax evasion among the rich and big corporations, Yellen plans to address “the existential threat posed by climate change.”

“In the process of boosting domestic clean energy production, the law will support our energy security and insulate us from the type of fossil fuel-driven energy volatility that we’ve seen in the past year,” Yellen will say, according to speech excerpts provided to The Associated Press.

Yellen’s September tour includes stops planned in North Carolina, the Washington, D.C., area. Then there’s an October speech at the 157th anniversary of the Freedman’s Bank Forum to talk about how the president’s economic agenda “advances equity and makes our economy stronger as a result.”

Freedman’s Savings and Trust Company was created by Abraham Lincoln in 1865 to provide economic opportunity for newly emancipated slaves.

Report urges improvements in US approach to hostage cases 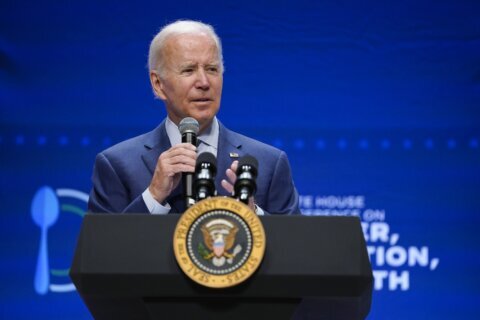 Biden to oil industry: Don’t raise prices due to hurricane