Newly acquired Wizards guard Delon Wright sees defense as his calling card and central to his role in Washington, but he thinks he has so much more to offer his seventh NBA team in four years.
Listen now to WTOP News WTOP.com | Alexa | Google Home | WTOP App | 103.5 FM

WASHINGTON — Newly acquired Wizards guard Delon Wright is joining his seventh NBA team in four years, so he is an expert on adapting to change as a well-traveled league veteran. But that doesn’t mean it’s easy to do and last year was a microcosm of that.

Wright, 30, was traded to the Atlanta Hawks where he was placed behind All-NBA point guard Trae Young on the depth chart. His playing time was inconsistent, as he averaged his fewest minutes (18.9 per game) since 2016-17, his second season. And after averaging 10.2 points and 4.4 assists on solid efficiency the year before, his shot attempts were cut from 8.2 per game to 3.5, essentially relegating him to play as a defensive specialist.

While Wright sees defense as his calling card and central to his role in Washington, he doesn’t think last year fully showed what he is capable of.

“It’s tough. I feel like last year I wasn’t used to my abilities. We figured it out later in the year, but that’s what happens when you go to a new team, it takes a while for the coaching staff to get adjusted to you,” Wright said.

The Wizards would love to see some of that offense return, particularly in the form of 3-point shooting, as Wright knocked down 37.9% from long range last year. Washington made the fewest threes in the league.

But defense was his biggest selling point for the Wizards and Wright is well-aware. He says team president Tommy Sheppard highlighted that end when they signed him and it’s not hard to see why. At 6-foot-5, Wright has long been a disruptive perimeter defender, who has averaged 2.0 steals per 36 minutes in his career, mostly as a bench player.

Washington was 25th in defensive efficiency last season and many team officials saw stopping the ball on the perimeter as a major point of emphasis this summer. They have some rim protection on the backend with Kristaps Porzingis and Daniel Gafford, plus some versatile forwards like Kyle Kuzma, Deni Avdija and Rui Hachimura. But those players can only do so much if the other team’s point guard is getting downhill consistently.

The Wizards know Wright’s capabilities quite well. He said Sheppard has already joked with him about the 2018 playoff series between the Wizards and the Raptors, when Wright had two 18-point games and 14 steals in six games.

“Fred [VanVleet] went out, he was hurt that series, so that was a chance for me to step up and show what I could do. The Wizards just happened to be the team we were playing against. It was really exciting times. I could see how the fans are here during the playoffs. They’re really into it and I look forward to making the playoffs again with this team,” Wright said.

Wright now hopes to take the next step in his career with the Wizards. He is excited about having some stability on a two-year deal after moving around so much the last few years. And over the course of his two-year deal, Wright hopes to make an All-Defensive team. He says his former coach with the Hawks, Nate McMillan, told him that is a realistic goal.

Wright’s exact role in Washington may take some sorting out in training camp and after the season begins. As of now, he projects to be their back-up point guard who will also likely play some alongside starting 2-guard Bradley Beal and in 3-guard lineups.

Whether he starts alongside him or not, Wright could be a positive next to Beal given his skillset. Wright would add size to the backcourt alongside the 6-foot-3 Beal, plus defense and the ability to space the floor. Those are traits that could allow Beal to do what he does best, which is score and make plays for others off the dribble.

Wright sees a lot of potential between the two of them.

“He’s a scorer, but he has a willingness to pass the ball. A lot of guys in his position, they are all buckets,” he said. “I’m looking forward to playing with him and not against him.”

As Wright well knows, there is likely to be an adjustment period as he joins a new team. But on paper, what he does certainly seems to fit the Wizards and their needs very well. 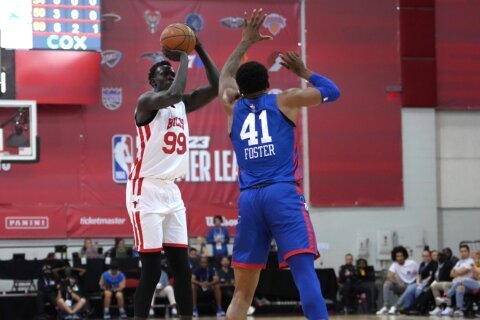 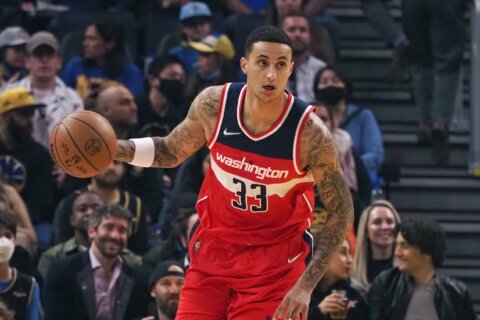 Is ESPN selling Wizards short with a 34-win prediction for 2022-23 season?