Spencer Dinwiddie scored 19 of his 27 points in the second half, and the Washington Wizards erased a 19-point deficit to beat the New Orleans Pelicans 105-100 Monday night for their fifth consecutive victory.
Listen now to WTOP News WTOP.com | Alexa | Google Home | WTOP App | 103.5 FM
(1/10) 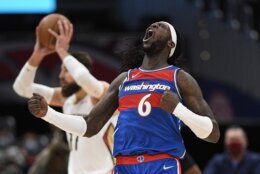 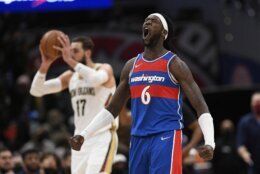 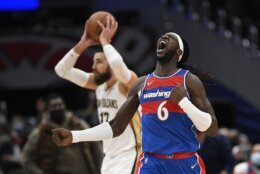 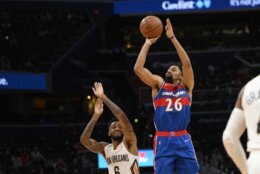 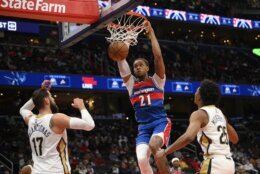 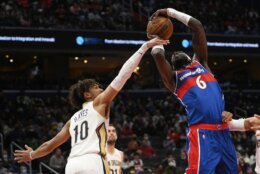 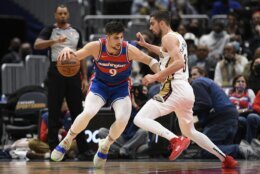 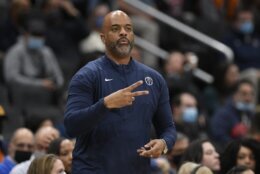 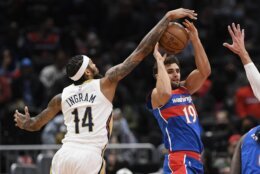 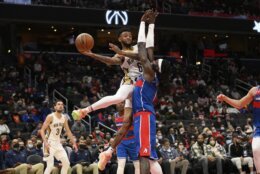 WASHINGTON (AP) — Moments after being serenaded with chants of “M-V-P! M-V-P!” at the free throw line, fan favorite Montrezl Harrell drew a foul on the other end of the court and pounded his chest as the home crowd roared in approval.

It took a big comeback, but Washington is off to the franchise’s best start in nearly half a century.

Spencer Dinwiddie scored 19 of his 27 points in the second half, and the Wizards erased a 19-point deficit to beat the New Orleans Pelicans 105-100 Monday night for their fifth consecutive victory. At 10-3, it’s their best start since the Bullets opened the 1974-75 season 11-2.

“We just woke up — I think we flipped a switch,” said forward Deni Avdija, who scored 11 and contained New Orleans’ Brandon Ingram in the fourth quarter. “When we play together and we have that right energy, it’s very hard to stop us.”

The Wizards have done this with and without All-Star guard Bradley Beal, who missed a second consecutive game mourning the death of his grandmother. They’re 3-0 with Beal out last season after going 2-10 in such games last season.

“We never want to be without Brad,” said first-year coach Wes Unseld Jr., who expects Beal back this week. “No one wants to be without their best player. But the fact that we can withstand some stretches is great.”

Aaron Holiday, who took Beal’s spot in the starting lineup, scored 12 points. Dinwiddie made his first three 3-point attempts in the third quarter to start the climb back from down 60-41, cutting the Pelicans’ lead to five before a series of fouls and missed free throws temporarily stalled the comeback bid.

Trailing by seven entering the fourth quarter, it took until Kyle Kuzma’s 3 with 5:18 left for the Wizards to pull even at 92 for the first tie since 33-all. Avdija’s fast-break layup put Washington up with under four minutes left, and the second-year pro from Israel grabbed a defensive rebound on the next Pelicans possession to help ensure Washington wouldn’t fall behind again.

The Wizards pulled away on jumpers by Avdija and Kentavious Caldwell-Pope, while the Pelicans missed 11 consecutive attempts from the field to let the game slip away.

“We shot 34 free throws, so we tried to put our heads down and be aggressive,” Green said. “We just couldn’t sustain it.”

New Orleans lost for the 13th time in 15 games this season, all without Zion Williamson because of a broken right foot. Ingram led all scorers with 31 points in his second game back from a hip injury, and Jonas Valanciunas added 16.

The Wizards have been playing without Rui Hachimura because the forward was granted a leave of absence for personal reasons. They know they’ll need to integrate him into the rotation at some point but don’t yet know what that looks like or when it will happen.

“It’s going to be a challenge,” Unseld said. “Obviously we’re playing pretty well. Sometimes as coaches we overthink it, and you’re worried about upsetting the balance. There’s another part of me that says, ‘You know what, just rip the band aid off and go for it, see how it looks.’”

Wizards: Held an opponent at 100 or fewer points for the sixth time in 13 games. They only did that five times last season. … Caldwell-Pope finished with 18 points and hit four 3s. … Dinwiddie also had nine assists. … Harrell has scored in double figures in every game. … Forward Davis Bertans, who has been out with a sprained left ankle, continues to practice and could play next week, according to Unseld.

Pelicans: Wrap up their two-game road trip at the Miami Heat on Wednesday night. 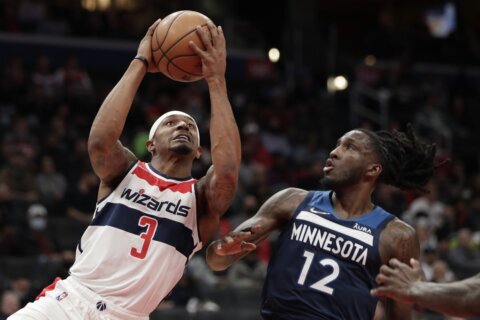 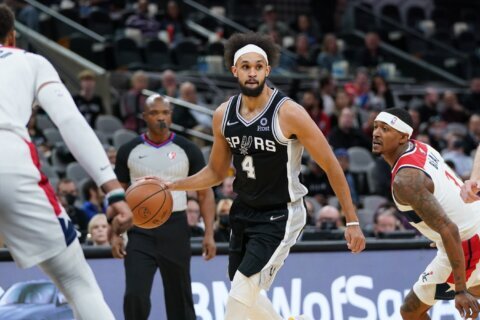 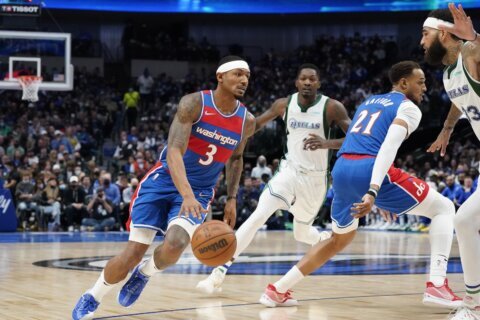