The Washington Wizards lost to the Spurs 116-99 in San Antonio on Monday night. Here are five observations from what went down.
Listen now to WTOP News WTOP.com | Alexa | Google Home | WTOP App | 103.5 FM

The Washington Wizards lost to the Spurs 116-99 in San Antonio on Monday night. Here are five observations from what went down…

The Wizards have not won a game in San Antonio since before Deni Avdija was born and after yet another loss, their 22nd straight in a span of 22 years, that streak will live on. Washington led the Spurs by six points at halftime, only to be outdone by 12 points in the third quarter and then 11 points in the fourth.

This seemed like it could be the year. The Wizards, now 13-8, have been a much better team so far this season than the Spurs, who improved to 6-13 with Monday’s win. As teams from different conferences, they only play in San Antonio once a season, so the Wizards will have to try again next year.

Their defense, though, may be a growing concern at the moment. Three of their five-highest point totals allowed came on this four-game road trip

The Wizards closed out their road trip by splitting it evenly at 2-2. They will return home to host the Timberwolves on Wednesday.

If you only watched the third quarter on Monday night, you would think Derrick White of the Spurs is an elite scorer, a superstar, maybe even a living legend. He was completely unstoppable and it kind of came out of nowhere. No disrespect to the guy, but he came into this game averaging 11.4 points while shooting 38.6% from the field and 28.7% from three.

But in the third quarter, he caught fire and scored 18 of his 24 points on the night. White played the entire frame and shot 7-for-9, including 3-for-4 from three. He also dished three assists. Everyone in the NBA is good and many players are capable of making teams pay for taking them lightly. Whether that was the case here or not, White certainly made the Wizards pay.

Coming off two big games in which he helped lead the Wizards to wins in different ways, Gafford came through again on Monday. He had 11 points, 10 rebounds and a block. He was the hot hand in the first half with 11 points as he helped the Wizards score 36 paint points by halftime. They had 56 for the game.

Gafford did it all while clearly playing through some pain in his right thumb. It was less than two weeks ago that he missed a game due to the injury and he continues to play with black tape on the finger. And in this game, at least twice he got hit on his hand and each time the contact seemed to re-aggravate the injury. Gafford played through it and played well, but there were several moments where he was wincing and holding his hand.

The Spurs aren’t the team they were for the better part of the past two-plus decades, but they do have some emerging young players. One of them is Keldon Johnson, who is taking a sizable leap this season, his third in the NBA. He had a solid game against the Wizards with 13 points on 6-for-8 shooting in 35 minutes. After winning a gold medal with the U.S. Olympic team, he has come back noticeably better in his age-22 season.

Why should that interest Wizards fans, you may wonder? Well, he’s not the only player the Wizards have seen recently from the 2019 class who is showing significant progress. Tyler Herro of the Heat would be another. Remember, Rui Hachimura was also a first-round pick in 2019. Their development is a reminder that when the Wizards get Hachimura back, he’ll prove to be quite a big addition. If they get the version of him we saw last year, that will help. But there’s a chance he gives them much more than that.

Given his track record of needing time after injuries to find his rhythm and conditioning, perhaps it should be no surprise that Davis Bertans is struggling right now. But the degree that he is struggling is at a minimum worth noting and, if it continues, could present head coach Wes Unseld Jr. with an interesting decision to make.

Monday’s game was the fourth for Bertans since the left ankle sprain which kept him out for 10 games. He went 0-for-3 from three, continuing what has been a stunning drought from long range. He is now 1-for-19 from the perimeter since coming back, which for a shooter of his ilk is quite surprising. Unseld Jr. may have to determine his threshold pretty soon.

If Bertans shoots like this, it will be tough to allow him to keep shooting, yet the Wizards need help with their threes and no one on the roster is capable of getting scorching hot from long range like he can. He just hasn’t been able to do it in a while. 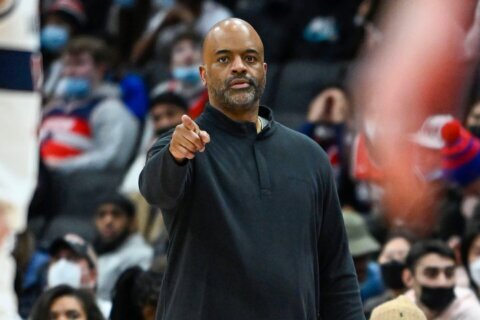