Analysis: Coach of the year will be the NBA’s top award race

It’s almost award-voting season in the NBA, and the best race is the one that not enough people are talking…
Listen now to WTOP News WTOP.com | Alexa | Google Home | WTOP App | 103.5 FM

It’s almost award-voting season in the NBA, and the best race is the one that not enough people are talking about.

The MVP race between Philadelphia’s Joel Embiid and Denver’s Nikola Jokic seems like a toss-up, and the realization that one of those two centers will be second-team All-NBA behind the other — they still do All-NBA by position, which makes absolutely no sense in a league that has gone largely position-less — will only add fuel to the anger from the fan base that feels like they were wronged by those results.

There will be great debates about other races as well: most improved player, defensive player of the year and the All-NBA balloting will inevitably lead to cries that some players got overlooked and were wronged. Some of those arguments will probably be right, too.

But the best race will be for coach of the year.

The winner will be deserving. So, too, will be about a half-dozen other guys who won’t win.

Here are some of the candidates who should be under consideration:

He won the award in 2011 after his first season in Chicago and might be on the same path now in his first season in New York. The Knicks are likely going to the playoffs for the first time since 2013. No team allows fewer points per game and the Knicks have a chance to end the season with the league’s lowest field-goal percentage allowed for the first time in 21 years. New York is going to finish with a winning record — amazing, when considering that over the six most recent seasons they had the lowest winning percentage in the NBA.

Some will say that the Suns’ rise to the No. 2 spot in the Western Conference is largely because of the arrival of Chris Paul, and that’s partly true. But don’t forget how Williams planted the seeds for success this year by that 8-0 record in the NBA’s restart bubble last summer. That allowed the Suns to start thinking big, and Paul coming aboard allowed them to start winning big — but Williams is the one running things. The Suns are going to the playoffs for the first time since 2010. And the fact that they’re not squeaking in should add serious legitimacy to Williams’ case.

He didn’t want to coach the Hawks, which would only add to the greatness of the story if the voters decide that McMillan has done the best coaching job this season. McMillan took over two months ago when Lloyd Pierce got fired and Atlanta was floundering; the Hawks are 20-8 under McMillan and are a serious contender for home-court advantage in the first round of the playoffs. He’d be the first interim coach to win the award after taking the job only after Pierce — who had him as an assistant in Atlanta — gave his blessing.

The Hall of Fame player never got a championship ring from his 18-year NBA career, but he’s a serious contender to get one in his first year as a coach. Nash put together a great staff — getting Mike D’Antoni as an assistant was genius — and the Nets are in a race with Philadelphia for the No. 1 seed in the Eastern Conference. Nash has managed a revolving door of injuries and three enormous personalities with Kyrie Irving, James Harden and Kevin Durant. The New York metro area hasn’t had a coach of the year since Pat Riley in 1993; Nash or Thibodeau could change that.

It’s a virtual certainty that the coach of the team with the best record in the NBA gets serious consideration for the award, and the Jazz are closing in on clinching the No. 1 overall seed for the playoffs. Snyder was second in the 2017-18 coach of the year balloting and has navigated this season without dealing with any major issues — not even as much as a three-game losing streak. Snyder is considered the favorite by at least some sportsbooks in Las Vegas, which makes it even more puzzling that there doesn’t seem to be more buzz for his candidacy.

The Wizards were 0-5 in December, were shut down for two weeks in January because the roster was decimated by virus-related issues and on Valentine’s Day they were dead last in the Eastern Conference standings. They’re now 10th in the East, in control of the race for the last play-in tournament berth, and no team in its right mind will want to see Russell Westbrook and Bradley Beal coming at them in Round 1 of the playoffs. Brooks, somehow, held the pieces together and got the Wizards playing their best ball now. He deserves a real look.

Gordon Hayward and LaMelo Ball have missed about a quarter of the season with injuries, Kemba Walker is no longer with the Hornets, and Borrego is taking a team that nobody expected much from to, at worst, the play-in round. Borrego likely won’t win, in large part because the Hornets don’t generate enough attention nationally, but those who truly follow the league will attest to how good a job Borrego has done. They defend, they share the ball, they’re balanced and they’ve found ways to stay in the East race despite a lot of injury woes. 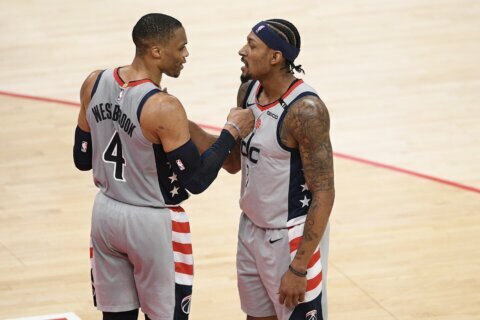 LeBron vs. Steph: A play-in game will be a superstar tussle