Giannis Antetokounmpo had his sixth triple-double of the season to help the Milwaukee Bucks to a 125-119 victory over the Washington Wizards on Saturday.
Listen now to WTOP News WTOP.com | Alexa | Google Home | WTOP App | 103.5 FM

WASHINGTON (AP) — Giannis Antetokounmpo had 33 points, 11 assists and 11 rebounds for his sixth triple-double of the season to help the Milwaukee Bucks to a 125-119 victory over the short-handed Washington Wizards on Saturday night.

Jrue Holiday added 10 of his 18 points during the fourth quarter for the third-place Bucks, who have won eight of nine to move a game-and-a-half back of second-place Brooklyn and two behind Philadelphia in the Eastern Conference standings.

And Khris Middleton sank four crucial late free throws as part of his 16 points and also helped get a key late stop on defense for Milwaukee.

“For the last minute, (it’s) can you execute now? Can you find the open guy? Can you make the tough shot? Can you get a stop?” Antetokounmpo said. “We were able to do that today, and I’m happy, I’m very happy. And hopefully we can carry over to the next game.”

“I thought we played hard,” Westbrook said. “When you play hard you give yourself a chance to win the game. I thought we did that from the get-go.”

Westbrook twice helped Washington fight back from multiple-possession deficits inside the final six minutes, and his 3 from the left wing tied it at 119-all with 41 seconds left.

Middleton answered with a pair of free throws, and defended as Westbrook missed a contested driving layup on the other end. Middleton added two more foul shots with 9.4 seconds left to increase the lead to four, Hachimura’s 3 attempt from the left wing rimmed out, and Holiday’s free throws sealed the game.

“I was just trying to keep him front, not foul him and try to contest.” Middleton said of his late sequence guarding Westbrook. “At the end of the day, I just wanted him to shoot the shot over me instead of blowing by me.”

Bucks: Improved to 2-10 when shooting worse from the floor than their opponent. … Led 36-33 at the end of the first quarter after Bobby Portis’ buzzer-beating 3-pointer. … Rookie F Jordan Nwora (ankle) was cleared to return, said Budenholzer, but did not play. He last appeared on Feb. 1.

Wizards: Beal rested a day after he was a game-time decision on Friday, when he ultimately scored 19 points in 29 minutes of action, and coach Scott Brooks believes he will be back on Monday. … Alex Len made his first start since Feb. 12, and F Deni Avdija made his first start since Feb. 7. … Len picked up a flagrant 1 foul for wrapping his arms around a driving Antetokounmpo with 1:15 left in the first half.

Milwaukee’s Brook Lopez outscored Washington’s Robin Lopez 11-2 in the twins’ first game against each other since Feb. 25 of 2019, when Robin played for Chicago. The brothers were teammates with the Bucks last season.

The Bucks and Wizards meet again in Washington on Monday. 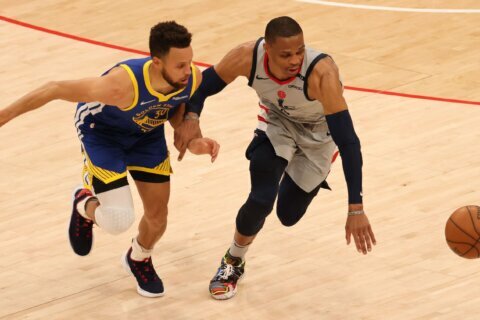 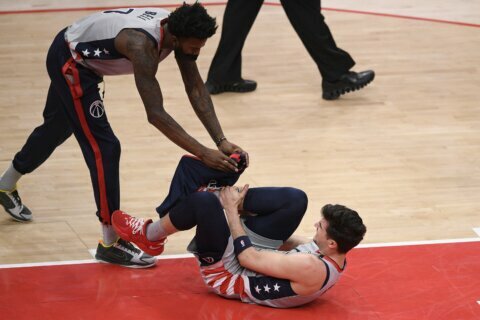 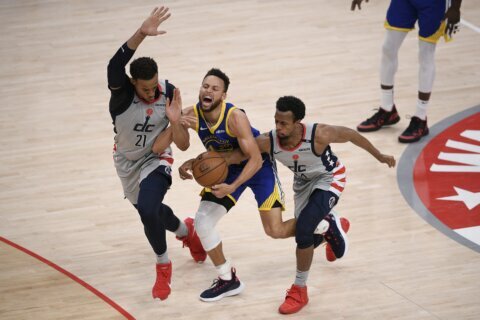