John Wall scored 34 points and Washington rallied in the fourth quarter to beat the Los Angeles Lakers 119-108 on Tuesday night, clinching the Southeast Division title for its first division crown in 38 years.
(1/8) 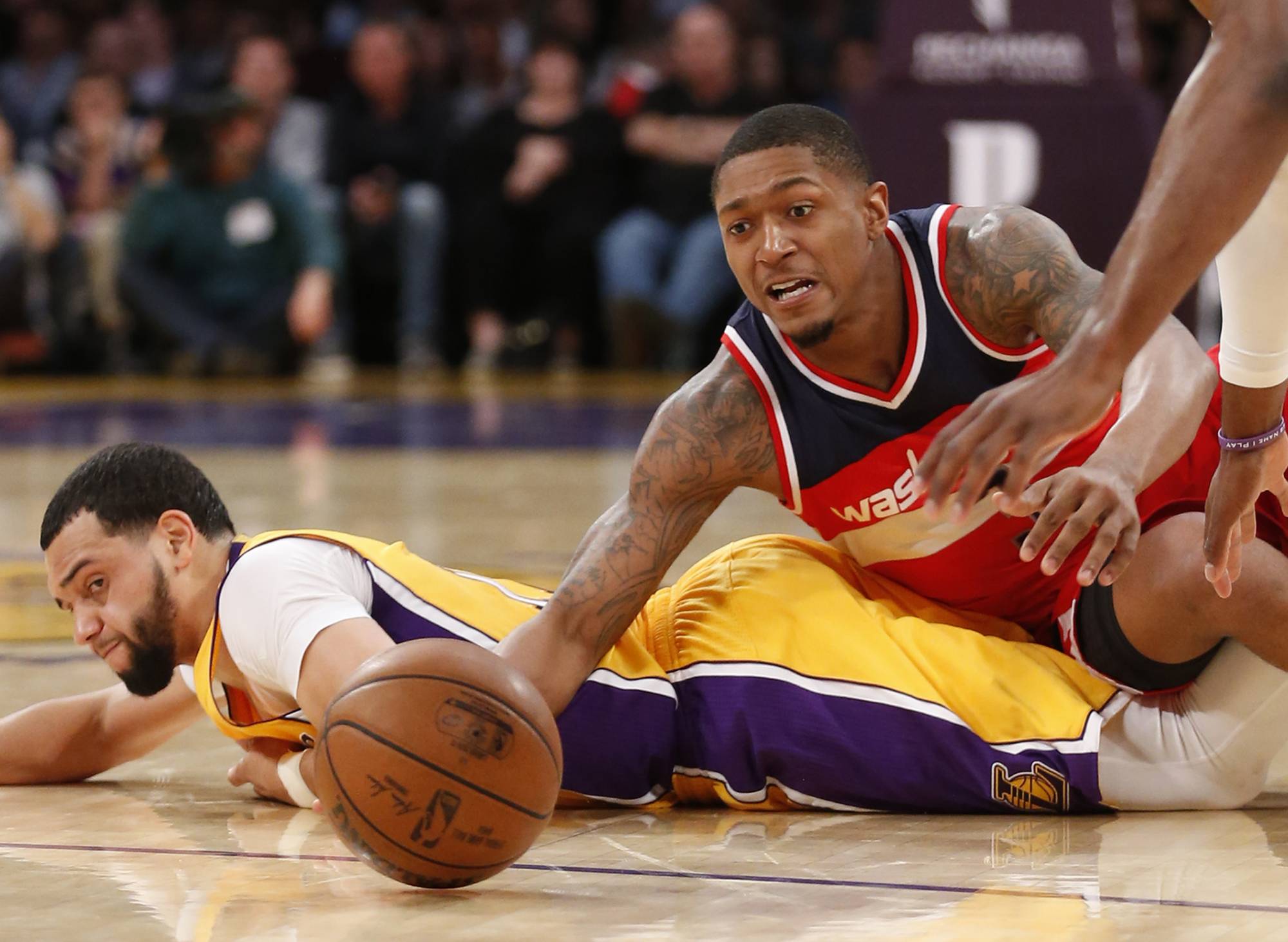 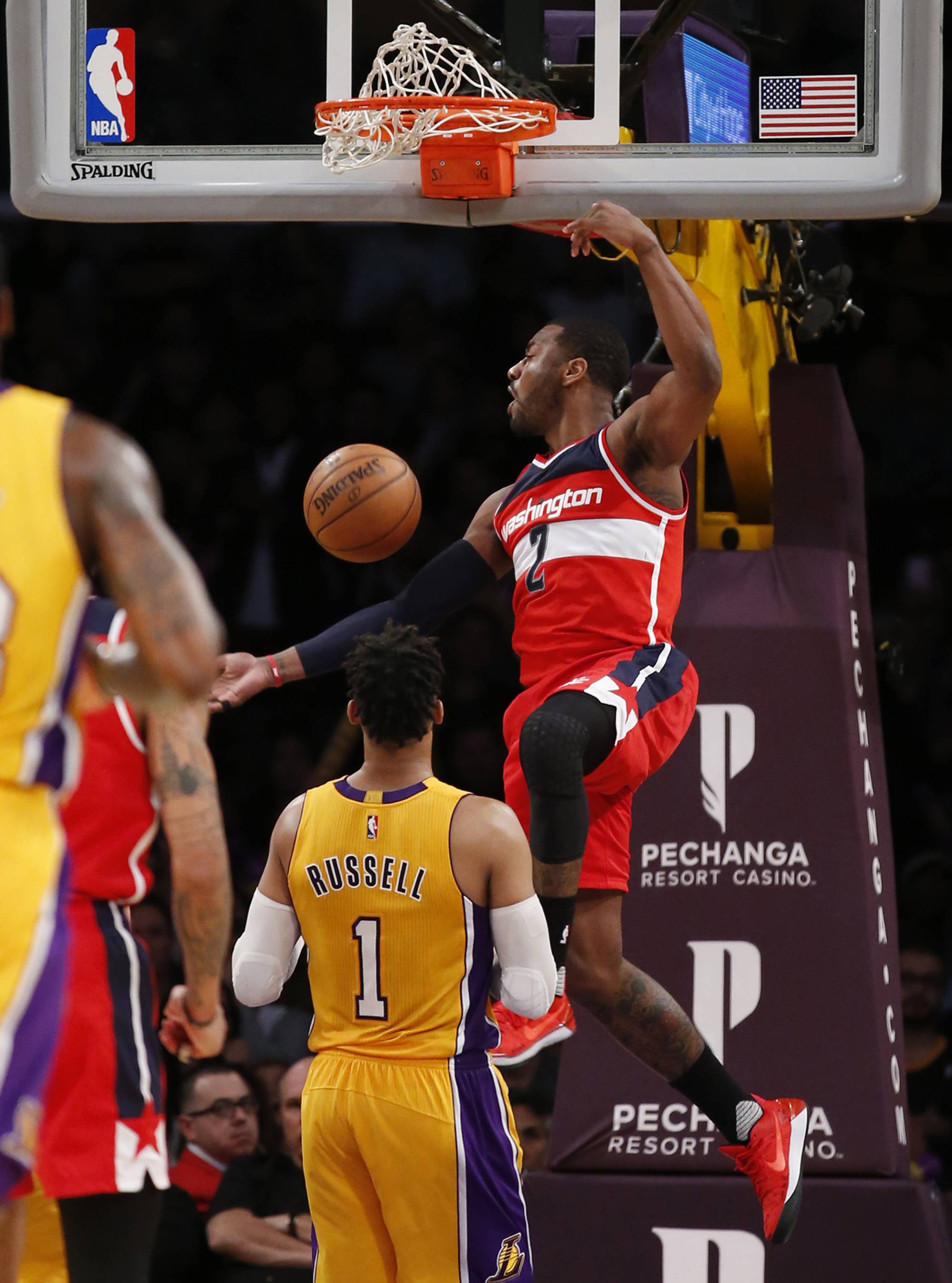 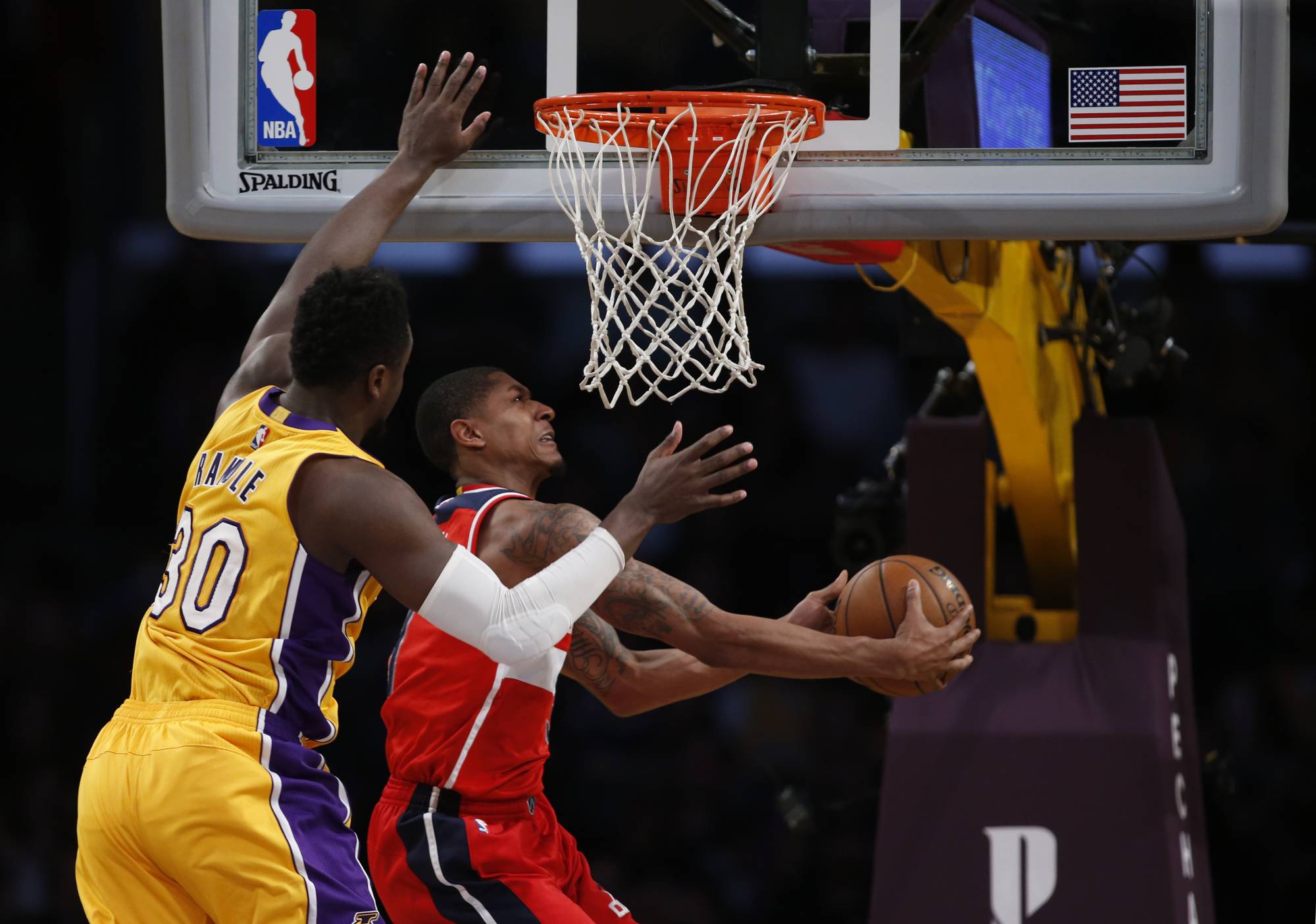 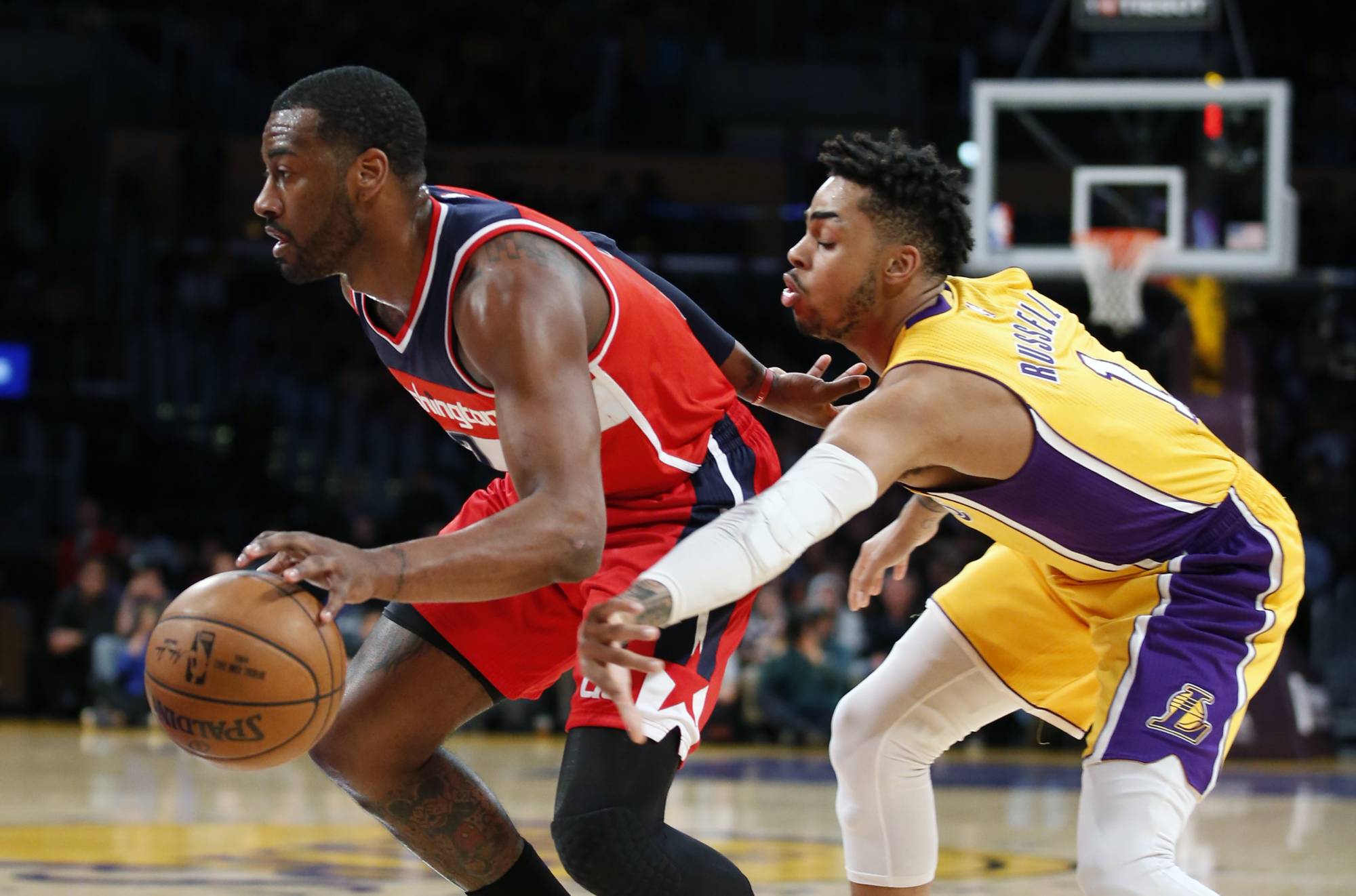 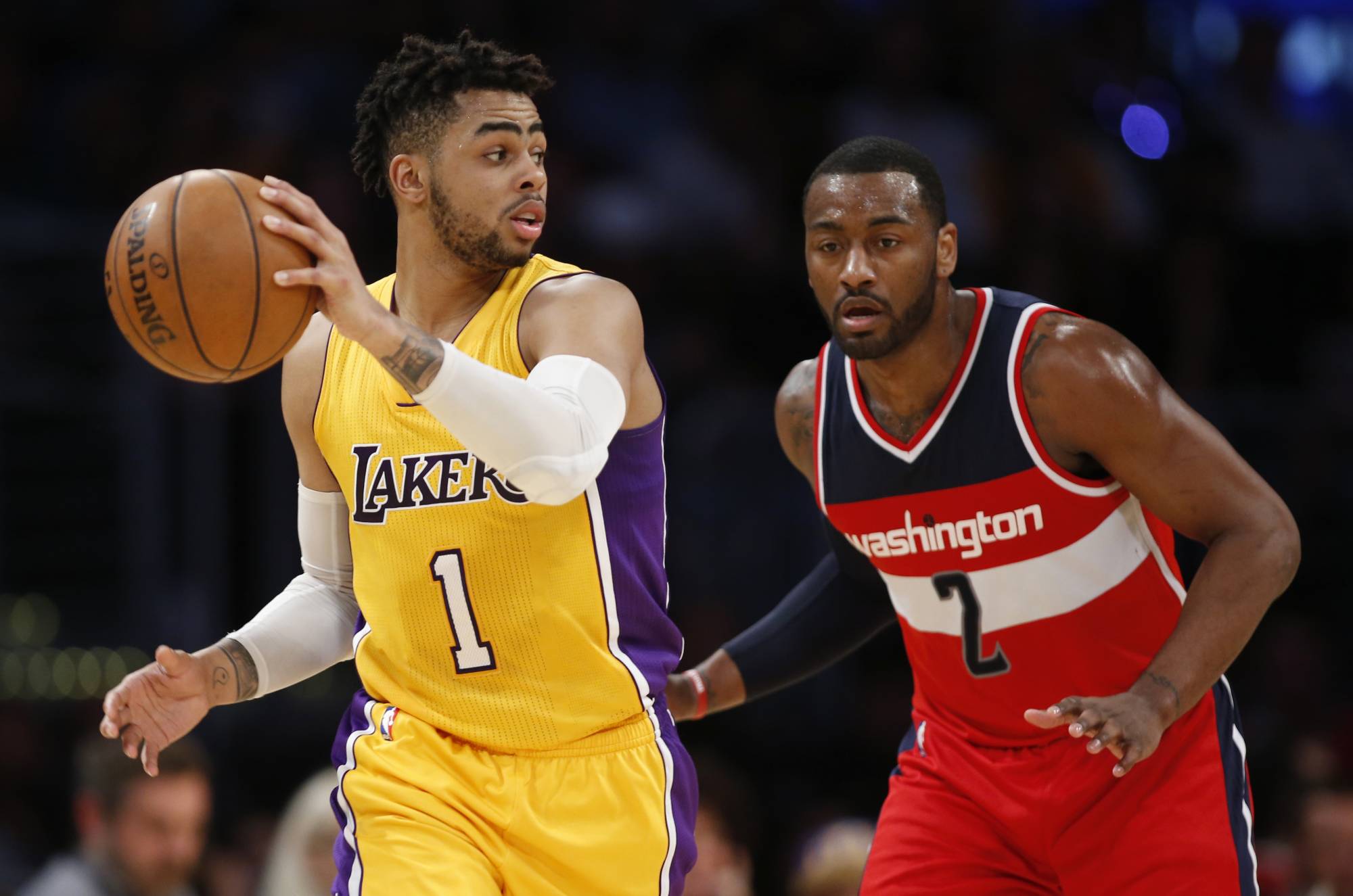 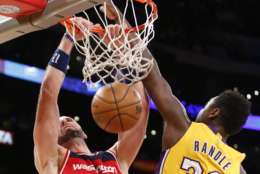 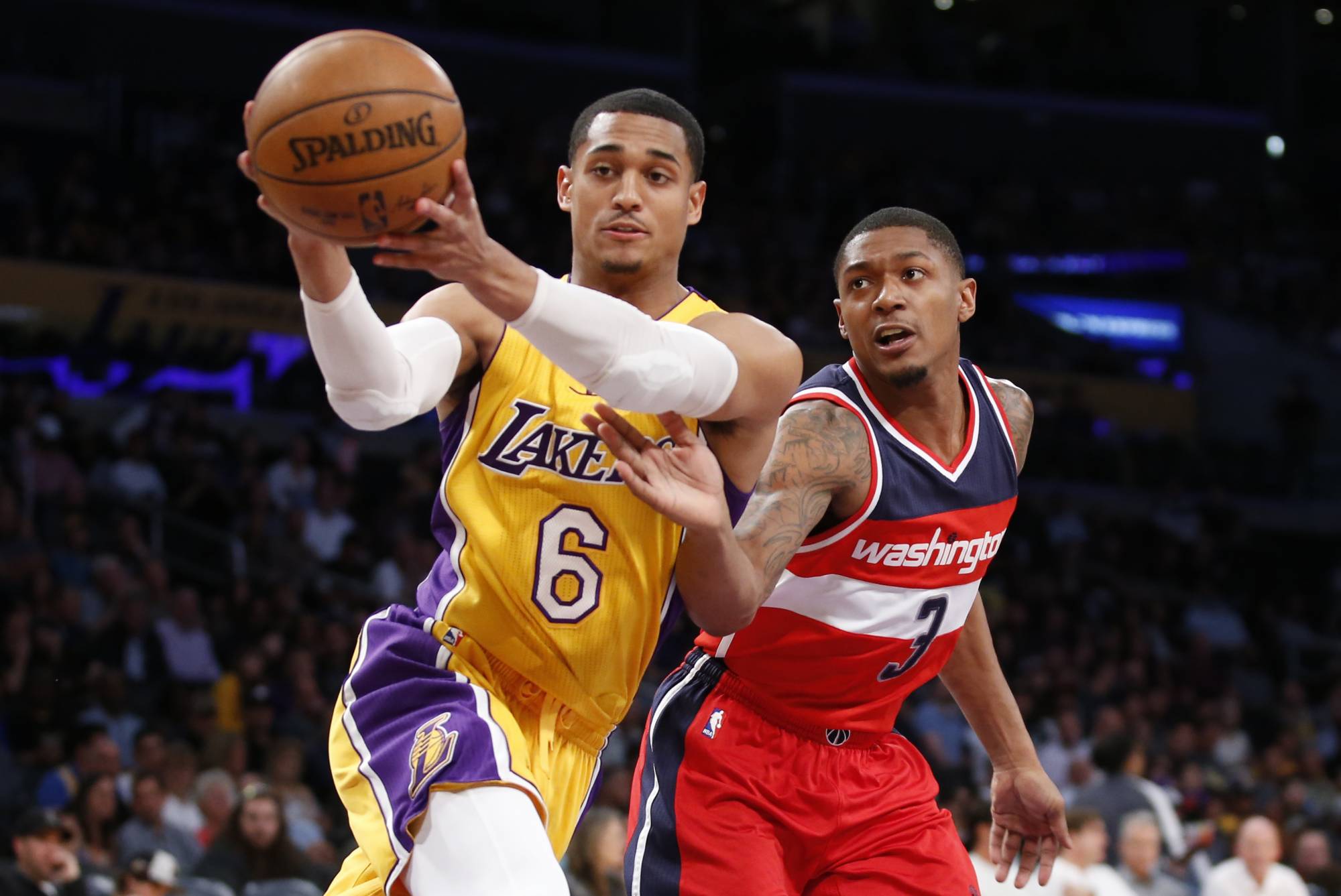 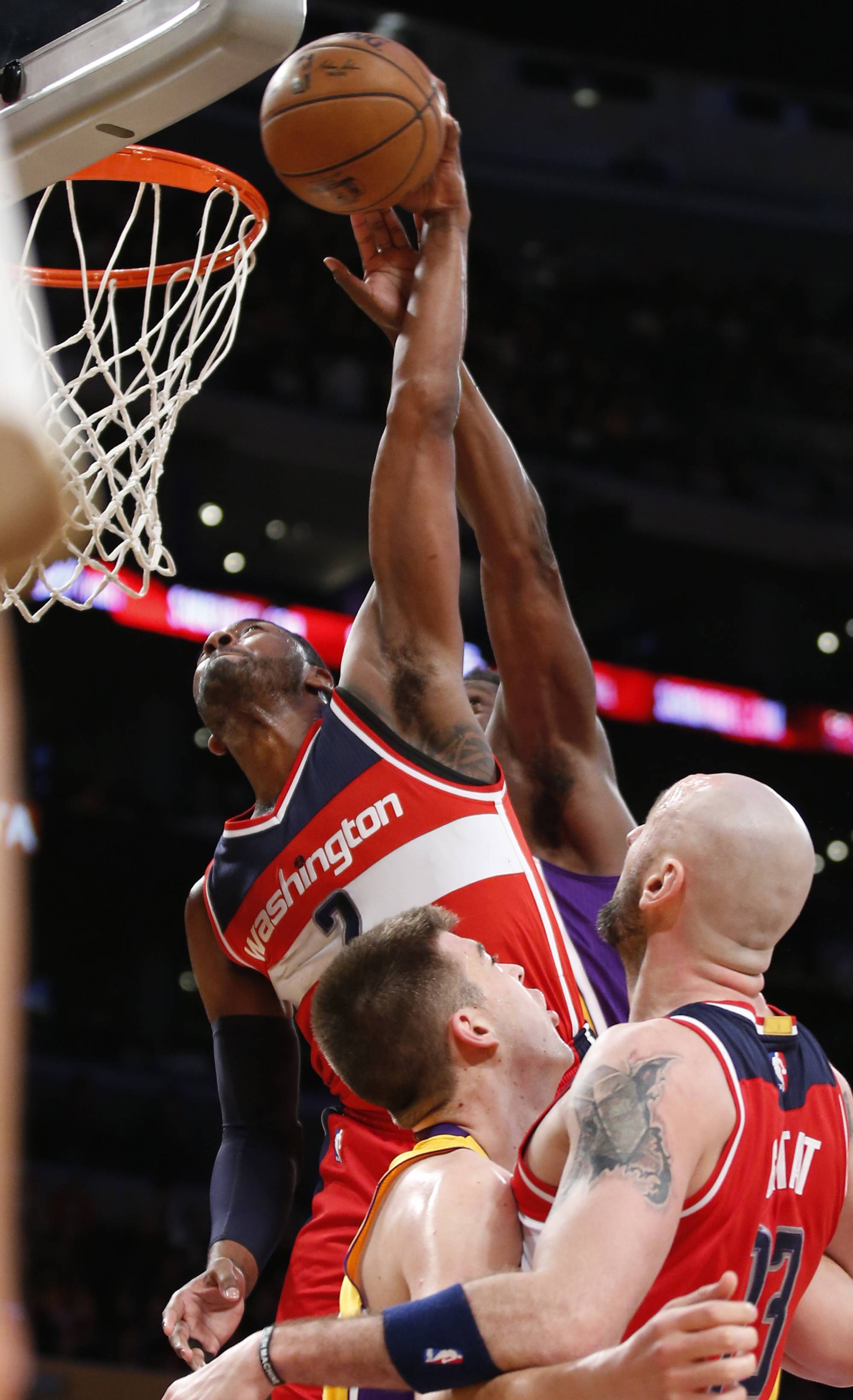 LOS ANGELES (AP) — Water pooled on a table in the middle of the noisy locker room and soaked in the carpet. The Washington Wizards had just celebrated clinching the Southeast Division for the franchise’s first division title in 38 years.

“We had a little water bottle fight in here,” a smiling Bradley Beal said after a 119-108 victory over the Los Angeles Lakers on Tuesday night. “It’s history for us.”

John Wall shot 14 of 25 for 34 points and Beal was held to 16 points on 7-of-16 shooting, but the Wizards ended the longest division-title drought in NBA history with their fourth straight victory.

“John and I especially, we’ve been on the team for five years,” Beal said. “It’s big-time for us and we’re excited to keep it moving forward.”

When the franchise last claimed a division title in 1978-79, it was known as the Bullets of the Atlantic Division and played in suburban Landover, Maryland. The team had won its lone NBA championship the previous season and went on to lose the 1979 Finals to the Seattle SuperSonics.

“Quite an accomplishment,” first-year coach Scott Brooks said. “It’s a credit to everyone in the organization.”

From 1979-80 on, Washington has had one of the worst winning percentages in the league, and while the team has made the playoffs 14 times in that span, it hasn’t gotten past the second round.

Washington put the divisional slump in the past by outscoring the Lakers 37-13 in the fourth.

The Wizards opened on a 19-6 run to tie it at 101 with their second unit in for much of the spurt.

“That changed the game,” Brooks said. “They’re energy (the bench) and gave our starters the chance to finish the game off.”

Wall returned with his team down four and hit a layup and stole D’Angelo Russell’s bad pass for a fast-break one-handed tying dunk.

Beal came back, too, and he and Wall combined to score Washington’s next seven points for a 108-104 lead.

“It’s a great accomplishment,” Wall said. “It’s something we can cherish, but we have bigger goals and our minds set on other things.”

The Wizards have won 16 games after trailing by double-digits. They were down 13 to start the fourth.

“We definitely got to credit our second group,” Beal said. “They got us back in the game.”

The Lakers had as many turnovers (five) as field goals and got dominated in the paint, 20-8, in the final 12 minutes.

“They didn’t have to run an offense,” Russell said. “They scored off of our missed shots, turnovers and they got transition baskets.”

Kelly Oubre Jr. hit a 3-pointer to make it 113-108, effectively finishing off the Lakers.

The Lakers led by 16 in the third, when they outscored the Wizards 28-14 to start. Wall tossed up an air ball during the Lakers’ run before making his team’s last two baskets to pull them to 95-92 going into the fourth.

The Lakers have lost 16 of 18 since the All-Star break and have eight games remaining before missing the playoffs yet again.

Wizards: They didn’t have a field goal over the final 4:13 of the opening quarter, with four different Lakers blocking five shots in that stretch. … They opened their five-game trip with a 12-point win over defending NBA champion Cleveland on Saturday.

Lakers: Coach Luke Walton turned 37 on Tuesday. … They lost the season series 2-0, getting beaten by eight points on Feb. 2.

With the division title locked up, the Wizards next have their sights on 50 wins. The franchise hasn’t won that many since going 54-28 in 1978-79. It would be just the fifth time the team has won that many games. They have 46 wins with eight games remaining after a 2-8 start.

Lakers forward Brandon Ingram sat out his second straight with right patellar tendinitis after playing in the team’s first 72 games, including 33 starts. He’s averaging 9.0 points, 4.1 rebounds and 2.0 assists as a rookie.

“He gives us a dynamic presence out there,” Walton said. “He’s grown so much as a player. Not only are we losing some scoring, but defense.”

Wizards: At Clippers on Wednesday in last back-to-back of season. They are 19-11 in such games. They beat L.A. by seven points at home in December.

Lakers: At Minnesota on Thursday in a rematch of last Friday’s game in L.A., where the Lakers won by 11 points in their first overtime game of the season.