The Burgundy and Gold have been seeking running back help after already having three running backs go down with injury this preseason.

Peterson was signed to a one-year deal, according to multiple media reports.

The Burgundy and Gold have been seeking running back help after already having three running backs go down with injuries this preseason.

Second-round pick Derrius Guice has been lost for the season after tearing his ACL in the first preseason game. Samaje Perine along with Byron Marshall were both injured in last week’s game against the New York Jets; both will miss some time.

Peterson is entering his 12th season in the NFL, and the 2012 NFL MVP spent time with the New Orleans Saints and Arizona Cardinals last season while rushing for 529 yards and two touchdowns in 10 games.

NFL contracts are not guaranteed until Sept. 1, so there is no risk in signing Peterson to a contract. The team can see what he has got left in the tank during these final two preseason games and then make a decision anytime between now and Sept. 1 without financial commitment.

Washington opens the season at Arizona on Sept. 9. 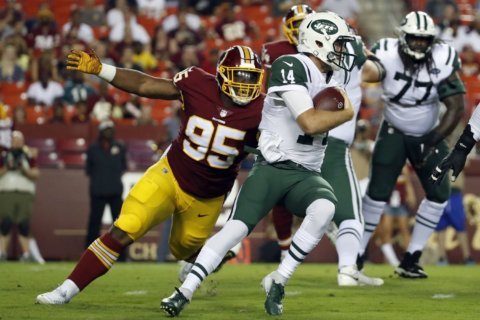