Despite the roster and coaching turnover in recent years, the Redskins are actually the model of stability in the 2016 NFC East.
Listen now to WTOP News WTOP.com | Alexa | Google Home | WTOP App | 103.5 FM

WASHINGTON — It’s amazing how one year ago, the Redskins were viewed as the hot mess of the NFC East compared to the “stable situations” in Dallas, Philadelphia and the New York Giants. Instead of being picked for another last-place finish (there were eight over an 11-year stretch from 2004-14), the 2016 Redskins are a selection by many not only to win the division, but also (heaven forbid) win a playoff game.

How did the world get flipped in such a manner over the last 12 months?

Kirk Cousins enters his second season as the starter and the Skins boast the only head coach/QB combination in the division that returns from 2015. This all of a sudden is the most stable signal-caller situation in Ashburn since … Mark Rypien in the early 90s? (Please go ahead and tell me that Brad Johnson was on stable footing with Jeff George brought in as a free agent in 2000.)

For years, the rest of the division laughed at the slippery sand on which the Skins built successive foundations. Norv Turner’s demise one year after a playoff berth? The Schottenheimer experiment? Spurrier’s signing of every available Florida Gator free agent? Gibbs 2.0 calling two timeouts in a loss to Buffalo? Zorn’s “Maroon and Black” outfit? The hits (or misses, depending on your perspective) kept on coming before the failed Shanahan & Son regime that featured a brittle quarterback the franchise gave away the house to acquire.

In the meantime, the Giants were winning Super Bowls, the Eagles were at least disappointing their fans on the NFC Championship/Super Bowl stage, and the Cowboys were racking up double-digit victory seasons with which to tease their faithful. The team that called FedEx Field its home delivered nothing but misery for its burgundy and gold jersey-wearing crew.

A franchise is nothing if it doesn’t have a strong chain of command. Whatever you think of the owner, his hire of Bruce Allen at least rid the team of Redskin Rasputin Vinny Cerrato (seriously, I’m still wondering how he was gainfully employed by this franchise for most of the last decade). And whatever your impression is of what exactly it is Allen does, he provides a buffer between the throne room and coaching office.

Jay Gruden may be the younger brother of a larger-than-life ESPN personality, but despite the fact that he consistently drops his “Gs” in news conferences, the hire paid off with a NFC East title last fall. Scott McCloughan came to Ashburn with a little baggage but a lot of potential as a franchise-builder. And while the roster is still in the process of being reshaped, at least he pronounces his draftees’ names correctly (I still can’t forgive Cerrato for Brian “Orapko”). All of which brings us to a rare occurrence in D.C. — having a solid quarterbacking situation.

Normally one wouldn’t be so confident about a 9-7 squad that didn’t beat a playoff team en route to the postseason, but have you seen the rest of the neighborhood? I mean have you seen it???

Dallas? Jason Garrett has the legitimacy of a Warsaw Pact puppet regime … and the quarterback situation there is less than ideal. For the third time since 2010, injuries have derailed Tony Romo’s season and now we get rookie Dak Prescott? Fear not, the same Mark Sanchez that couldn’t beat Trevor Siemian for the starting spot with Denver is waiting in the wings. How long can they keep Jerry Jones just saying things instead of actually doing something destructive to the team? And then there’s always the arrest that’s around the corner with the Cowboys. Dumpster fire …

The New York Giants? Yes, Eli Manning is back, and the 35-year-old actually has played better lately (30- and 35-touchdown seasons after tossing a league-high 27 interceptions in 2013). And he has his offensive coordinator Ben McAdoo running the whole show now. Before you start saying Ray Handley, the issues of this team will be on the defensive side of the ball — the Giants allowed the most yards and third-most points in the league last fall. Grease fire …

Philadelphia? Somehow the team that posted back-to-back 10-6 seasons completely imploded last fall. After handing all of the personnel power to Chip Kelly only to see the coach dismantle what was a playoff team, the Eagles fired the coach and brought aboard former assistant Doug Pederson to rebuild this wreck. They’ll start their fifth primary quarterback in five years…as rookie Carson Wentz got the nod Sunday after playing one quarter in the preseason. Eagles fans hope the first-round pick will be as “locked in” the rest of the way as he was against the hapless Browns. Figuratively, of course — not like when Wentz found himself trapped in a New Jersey gas station bathroom in the offseason and needed garden shears to rescue him. Tire fire…

Of course, the Redskins were perhaps a bad second half against Tampa Bay away from scrapping the entire Gruden-Cousins marriage last October. The last three times the ‘Skins have made the playoffs, they’ve disappointed their fans by following up with a last-place NFC East finish. Be optimistic, but savor each moment in this new rarefied air. Because in the NFL, the game board can just as easily flip back and send FedEx Field from its new location between Boardwalk & Park Place to the familiar spot between Mediterranean & Baltic. 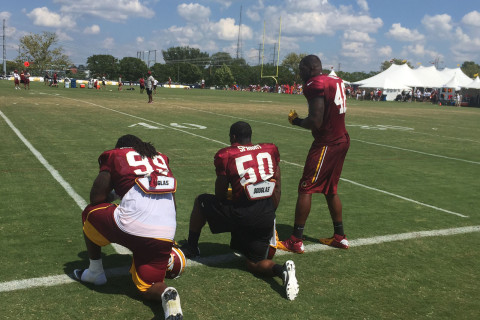 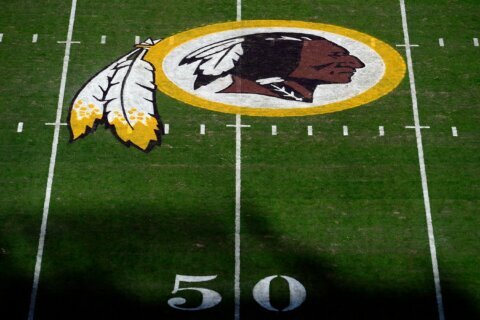