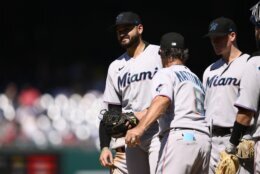 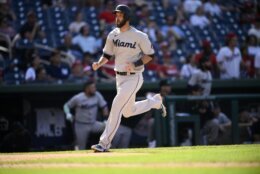 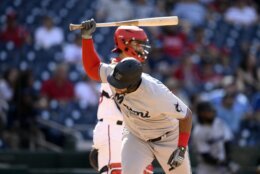 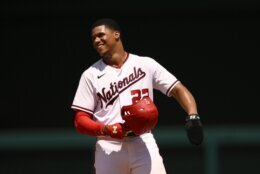 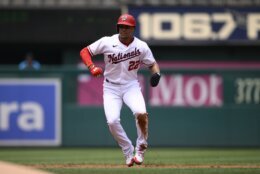 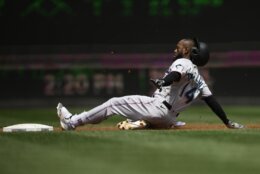 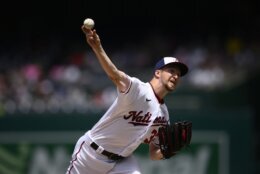 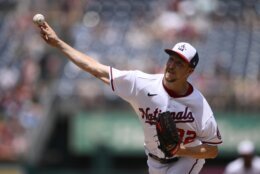 WASHINGTON (AP) — Down to their final strike Sunday, the Miami Marlins got another big home run to keep alive a winning streak that started with one.

Jesús Sánchez hit a two-run home run with two outs in the ninth inning to avoid a loss and provide enough cushion when the Washington Nationals tied it, and the Marlins got to reliever Carl Edwards Jr. in the 10th to win 7-4 and extend their streak to four in a row.

Four days after Avisaíl García’s homer beat St. Louis, the Marlins moved three games shy of .500 thanks to Sánchez’s 11th of the season coming at the most opportune time.

“Huge,” manager Don Mattingly said. “The game don’t move on without that.”

The Marlins have won 11 of 12 against the Nationals and can start dreaming about taking a shot at an NL wild-card spot despite being 26-39 against everyone else.

“Winning games is a lot of fun, and we know right now in July it’s kind of crunch time,” reliever Anthony Bass said. “We want to put the pressure on the front office to let them know that we want to make a run here (to) the postseason, and July’s kind of the month to do it.”

The loss came at potentially a high cost for the Nationals, who lost star outfielder Juan Soto to a left calf injury. Soto flexed and pointed to his left leg after making a throw in right field in the third and was taken out after being involved in a rundown in the fourth.

Soto, the face of the franchise the organization is attempting to sign to a long-term contract, Soto had his hitting streak snapped at eight games after getting walked twice. He left the ballpark Sunday evening to get an MRI.

“Oh yeah, it’s terrifying, obviously,” said Nationals first baseman Josh Bell, who ended Pablo López’s no-hit bid in the seventh and hit a go-ahead solo home run in the eighth. “Fingers crossed that it’s not anything too, too time-consuming. We’ll see. I know he’s probably going to get the results back here soon. I know we’re all holding our breath for him. I guess time will tell.”

García also played a role in this comeback, drawing a two-out walk in the ninth to bring Sánchez to the plate for his home run off Washington closer Tanner Rainey on a 2-2 pitch. Brian Anderson, Jon Berti and Joey Wendle all singled off Edwards (2-3) in the 10th inning.

“Edwards has been really good,” Martinez said. “Just really couldn’t find the strike zone and got behind and he got hit pretty good.”

It almost didn’t take heroics with López throwing six no-hit innings before allowing three in a row in the seventh and getting pulled for Bass, who allowed a sacrifice fly before locking things down. López left with a no-decision after allowing two runs on just those three hits and striking out five.

“It was good to see him back and kind of see him feeling better,” Mattingly said. “Obviously his stuff ticked way up. I know him and (pitching coach Mel Stottlemyre) had been doing some stuff this past week — just mechanical, a little small thing — and kind of got him back on track.”

Tanner Scott (4-2) got the win, and Dylan Floro pitched a scoreless 10th for his first save this season.

Berti was thrown out by Keibert Ruiz in the third, keeping him from adding to his major league-leading total of 25 steals this season.

Marlins: Wendle was back in the lineup at shortstop as part of the team’s day on, day off plan to ease him back from a right hamstring strain. Wendle was activated off the injured list and returned Friday after missing the previous month.

Nationals: RHP Aníbal Sánchez, who has been on the 60-day injured list with a pinched nerve in his neck since April, was set to throw roughly 60 pitches over four innings or so Sunday night for Triple-A Rochester. … Manager Dave Martinez said RHP Victor Arano (inflamed left knee) is close to returning after throwing a bullpen session and going through some agility drills, with a trip to the team’s minor league facility in West Palm Beach, Florida, up next before a rehab assignment. 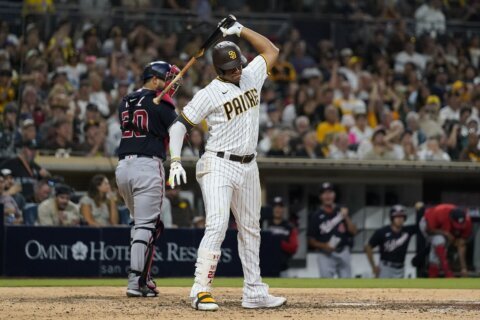